Taiwan on Tuesday amended its animal cruelty laws to make it illegal to eat dog and cat meat, a first in Asia.

Taiwan’s animal protection law previously only targeted the slaughter and sale of dogs and cats for human consumption. Now anyone found eating or buying dog or cat meat faces a fine up to $8,200 as well as the publication of their name and photo, The Associated Press reported.

Additionally, anyone who deliberately harms animals faces two years in prison and a $65,000 fine under the new law. Pulling an animal on a leash that’s tied to a driver or motorcyclist is also punishable with a fine up to $500.

“This legislation is going to send a message to the Chinese mainland, Nagaland state in India, Vietnam, Indonesia and other Asian countries where dog meat consumption is still legal that ending the brutal dog meat trade is the positive trend across Asia and a step in the public’s long-term interest,” Kelly O’Meara, HSI’s director of companion animals and engagement, said in a statement Wednesday.

“Most people in Asian countries do not eat dog and cat, and most find the cruel and often crime-fueled trade appalling. The animal protection movement is growing rapidly across Asia and the calls for an end to dog meat cruelty are getting louder and louder.”

A few governments in Asia have previously outlawed killing dogs and cats for consumption, including Hong Kong in 1950. The Philippines outlawed killing and selling dog meat in Manila in 1982 and expanded the ban nationally in 1998, the Washington Post noted.

Dog meat is already less common in Taiwan but also continues to be eaten in countries like Korea, Indonesia and China, where an annual dog meat festival is held in Guangxi province.

Though HSI estimates that 10 million to 20 million dogs are slaughtered each year in China, making up the majority of the canines consumed around the world, the organization says it’s not a common dish.

“It is not part of mainstream Chinese culinary culture,” the HSI states on its website. “There is a growing animal protection movement in the country that roundly opposes the dog meat trade, and there are frequent and documented violent clashes between dog thieves and angry dog owners.”

The HSI believes that dog meat is likely consumed by older generations and those who believe it has health benefits. According to Reuters, people in parts of Taiwan eat dog meat in the winter to improve body warmth and blood circulation.

Last month, the HSI made news after rescuing 55 dogs from a meat farm in Goyang, South Korea.

Clarification: This article has been revised throughout to reflect that Taiwan’s law was the first in Asia to ban the purchase and eating of dog and cat meat, not specifically the slaughter or sale, which Hong Kong and the Philippines had previously outlawed. Information about those laws has also been added. 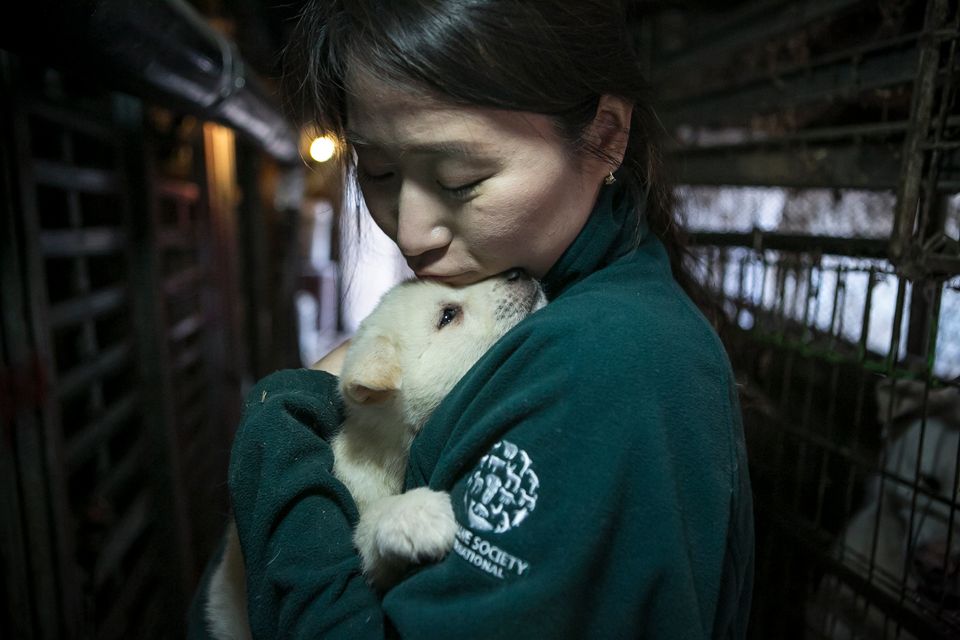 1 / 16
Dozens of dogs are heading to new homes in the U.S. after being rescued from a South Korean dog meat farm.
humanesociety.org