Thousands of lesbian, gay, bisexual and transgender (LGBT) revelers touched down in Taiwan over the weekend for Taipei's 10th annual Gay Pride event.

Despite all the colorful festivities (which included a spectacular parade), many of the over 65,000 people in attendance said the event had a more serious aim: marriage equality. "The theme this year is to fight for equal rights on marriage. Gay people are also tax-paying citizens and we demand the same basic right as any heterosexual couples," Mu Chuan, one of the organizers of the rally, told the AFP.

Added Kongpaphop Panya, a 30-year-old Thai resident: "I just want to tell the world we have the right to love equally like others."

With its reputation as Asia's most liberal city, Taipei has a number of LGBT-relevant sights and attractions, which make it a natural destination for many international visitors from China and Japan.

A landmark bill to legalize same-sex marriage in Taiwan has been pending since 2003, CNN notes. In August, the country hosted the first-ever Buddhist lesbian wedding.

Take a look at photos from Taiwan's 2012 Gay Pride event in Taipei: 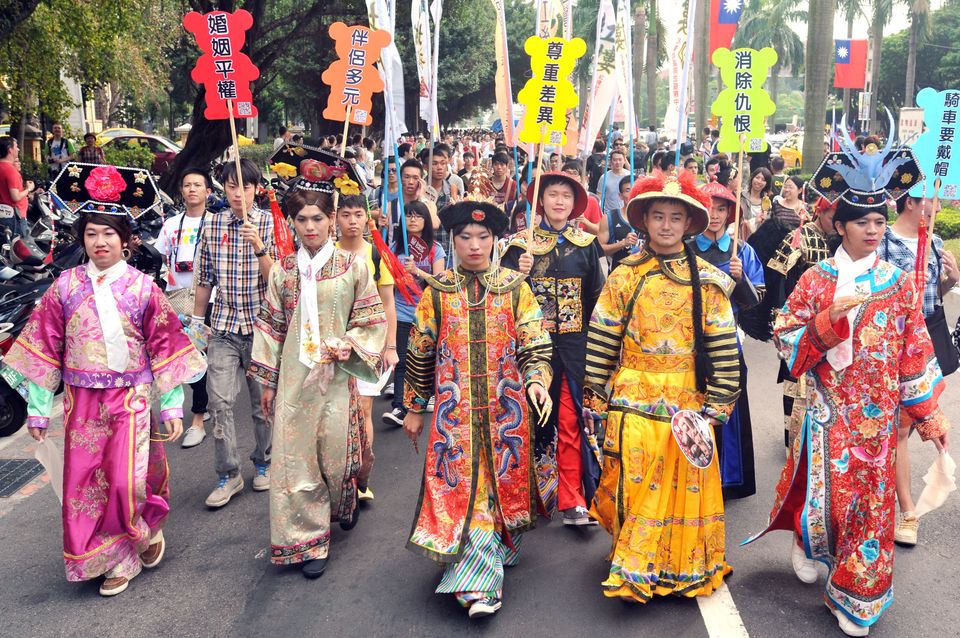 1 / 22
TAIWAN-GAYS-RALLY-RIGHTS
Participants take part in the gay parade in Taipei on October 27, 2012. Tens of thousands of people from Taiwan's gay community and abroad marched on Saturday to push for the legalisation of same-sex marriages on the island, organisers said. AFP PHOTO/ Mandy CHENG (Photo credit should read Mandy Cheng/AFP/Getty Images)
Getty Images