All dams are game-changers, that is why they are built. The Rogun Dam in Tajikistan -- when finished -- is slated to be the tallest dam in the world (at a prospective 335 meters), and as such it is expected to turn around the fortunes of the entire nation and to help its neighbors, namely, Afghanistan, to the south and, ultimately, Uzbekistan to the west.

According to Popular Mechanics there are 845,000 dams in the world. All of them serve as water catchments, all of them radically impact local and regional environments, all of them have calculated upsides and downsides for stakeholders in both economic and real-life terms.

The as-of-yet unfinished Rogun Dam in Tajikistan is a textbook example of a large dam project that will have large lasting impact for itself and its riparian neighbors downstream. The economy of Tajikistan could improve dramatically with the completion of this dam. 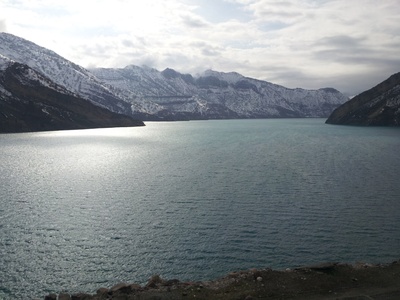 Conceived in the 1960s by Soviet planners as a way to harness and regulate water supply in the arid region of Central Asia. The dam started in 1976, and worked on until the Soviet Union collapsed in 1991. The Dam was only about half completed before construction stopped. For years the project languished, with starts and stops due to disagreements with various 'partners' involved in the project, i.e. the Russian Parliament, the Tajik Parliament, RUSAL, etc.

Plans were revived in earnest in 2010 when the Tajik government launched an IPO aimed at finishing construction of the Rogun Dam project. The hope was to raise $1.4 billion USD, but only 20 percent of that amount was raised, enough to fund two-year's worth of construction. The global economies were still recovering from the financial collapse of the credit markets that had caused the markets to seize up and freeze virtually all financing.

From the Tajik perspective, the Rogun Dam would entirely change its place in the region. At present, Tajikistan is 125th out of 187 countries on the UN Human Development list. Current Tajik President Emomali Rahmon has been a positive advocate of the Rogun Dam, working incessantly and with commendable consistency to bring attention to the benefits that the completion would bring to his country and the entire region. In November, the country will have national elections and many hope to see the current President stay in power so that he can see his ambitious goal to fruition - the completion of the dam.

Just this week, the President Rahmon met in Brussels with European Council President Herman Van Rompuy and, in addition to assuring continued advances in democracy, President Rahmon also advocated for the Rogun Dam. President Rahmon held meetings with NATO Secretary General Anders Fogh Rasmussen where both leaders discussed that Tajikistan has been an ally of NATO and has been helpful to the alliance in its battle in Afghanistan. In fact, the Dushanbe Airport has been used by NATO forces throughout the ongoing conflict in Afghanistan. Tajikistan was the first country in Central Asia to sign a transit agreement for the ISAF mission.

Although Tajikistan is still one of the least economically wealthy countries in the Central Asian region, the country is full of potential. Why? Because Tajikistan has copious amounts of the most sought after resource in the region, water, in the form of glacier run-off, rivers that flow out of its massive mountain ranges, incredible hydro-electric potential.

And, subsequently, it holds the keys to much of the water supply for agricultural irrigation, other industry usages, and for human consumption for its much larger downstream neighbor in terms of population and economic force, Uzbekistan. Even during Soviet times this was the case, but then central government control meant that allocations of water, oil, and other commodities were shifted back and forth between what were then the various Soviet states in Central Asia, in an unsettled, destabilizing manner as deemed by some, or as according to need, as deemed by others.

At any event, when the Soviet Union collapsed, so did the balancing act agreements that had regulated resources, water among them, between these former Soviet states, now independent nation-states. In many regards, the old arrangements were newly adopted and re-embraced by the new nations. But not always, not in all instances, and not in regard to all unforeseen issues that would later arise.

Together Tajikistan and Kyrgyzstan control 68 percent of the fresh water supply in the Aral Sea basin of Central Asia. They are both largely mountainous countries with limited arable land. They are both dwarfed by larger economic neighbors intent upon maintaining present water supply conditions and, thus, present revenue sources, namely, for the cotton industry in Uzbekistan, at present the world's sixth largest cotton producer (down from second place until recently). One third of Uzbekistan's labor force works to produce cotton. Any change in water flow from the mountains of Tajikistan and Kyrgyzstan would endanger the Uzbek cotton industry, cotton production being a well-known highly water-consumptive enterprise.

What Tajikistan is striving to do is to lift itself from under-developed status to developed status, to produce for itself a supply of electrical power during the long, harsh winter months when Tajiks have historically had little or no electrical power, and to brighten its prospects in a fast changing world that rewards innovation and punishes lack of vision, lack of planning, and lack of implementation. What Uzbekistan wants is to continue producing cotton to world markets at present rates under present conditions, and to continue providing one out of five Uzbek's a job in cotton-agribusiness.

What looks like a set-up for intractable conflict need not be. There are possible ways through this morass that could provide a win-win for both parties.

If Uzbekistan only advocates for the status quo, its efforts might prove disastrous to cotton production. Much of its arable land will go fallow. Unemployment will rise. If it begins now to plan for the eventual completion of the Rogun Dam and the eventual impact it will have upon post-completion waterflow into its river basins, then it will fair better.

At present Uzbekistan relies upon "trench irrigation methods" hundreds of years old, and 50 percent to 90 percent of the water used in this manner is not effectually utilized, and is, thus, wasted. A change to modern "drip irrigation methods" would slash wastes considerably, by at least half, perhaps more.

Another solution could be water pricing that on its surface might appear to only favor Tajikistan. Until now Uzbekistan has paid very little, or nothing at all for the water that it uses that enters its environs through watersheds originating in Tajikistan. Yet it uses the lion's share of all the water output in the region, and almost entirely for cotton production.

A fair or even modest system of water pricing could provide incentive for Uzbekistan to modernize their cotton producing methods, and could provide Tajikistan much needed revenues, that would, in turn, lift the whole macro-economy in the region.

And yet another solution could be possible if Tajikistan were willing to share with Uzbekistan profits derived from hydro-power throughout the region. Uzbekistan could then more easily afford government programs aimed at helping cotton farmers reto-fit their irrigation equipment, which would lead to increased water conservation, etc.

None of this will be easy, especially given the present tense political climate in Central Asia between neighbors vying for scant resources. But the need to work out mutually beneficial agreements becomes more compelling as the Rogun Dam project progresses forward. President Rahmon is to be commended for his commitment to finding diplomatic solutions to water sharing in the region and to forwarding a project which would have such a positive impact to the development of the region.

Deputy General Secretary of the United Nations Jan Eliasson sometimes likes to illustrate the importance of water in the world by holding up a clean glass of it before meetings and say, "This glass of fresh, clean water is a common sight for us. But to two billion people in the world, it is a luxury." Eliasson then follows that with admonishments for the hearers to take heed, to preserve this precious commodity, and to remember that others have due cause for concern.

If Tajikistan and Uzbekistan are to live at peace with each other, they will find a way to nurture, and conserve, and share the water that flows between them.