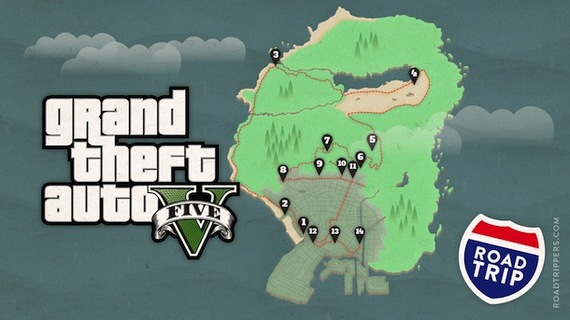 GTA 5 is so much more than an epic crime game. It's also a pretty awesome road trip quest. Next time you're driving down the Pacific Coast, hit up some of the real-life locations from Grand Theft Auto V's Los Santos. A word of caution: skip the hookers and don't plow through pedestrians.

This is Big Creek Bridge, you can find it on the West Side of the game. In real-life it's the iconic Bixby Bridge.

The Los Santos Observatory is located on Verdant Bluffs. No major gang activity to speak of, and no safe houses. This place is super easy to visit in real-life as it's modeled after Griffith Observatory, a popular tourist attraction in L.A. with loads of spacey and sciencey stuffs.

Vinewood Bowl is an entertainment venue, north of Vinewood. It's based on the real-life Hollywood Bowl in L.A.

This is the location for Franklin's hotel assassination mission. The reward is $7,000 and unlock a New Safe House. In real life, the Von Crastenburg is the Roosevelt Hotel.

Tequi-la-la is a nightclub featured in the side mission, Vinewood Souveniers - Willy, in which Trevor has to get a gold tooth from Willy, the bassist for Love Fist. The club was modeled after Hollywood's Whisky a Go Go, a rock 'n roll nightclub.

The Playboy mansion Easter Egg is found in northwest Richmond. Visit it at night when it's covered in blue and pink neon lights.

Vespucci Beach is a based on a combination of Santa Monica and Venice Beach.

South of downtown Los Santos is the Los Santos Forum (AKA L.A. Forum) and (in GTA 5) it's the location of the 8-Track stadium race.

The Jefferson Towers are located in East Los Santos. The real-life towers are actually the Watts Towers in Watts, L.A., they're a popular tourist attraction in South Central L.A.

The Los Santos storm drain appears in three missions: The Jewel Store Job, Fame or Shame, and Hood Safari. In real-life, it's based on the L.A. River.

The Alamo Sea at the foot of Mount Chiliad in Blaine County is described as "a putrid, salt-rich lake." This is pretty accurate since it's based on the real-life Salton Sea, which is often described as pretty gross-smelling.

Salvation Mountain served as the inspiration for GTA 5's Hippie Town in the Desert. It's basically an art installation that serves as a "tribute to God and his gift to the world." Yeah, let's go with that.

Visit Geektown, USA to follow this trip and get inspired by America's nerdiest destinations. Hit us up on Life Invader.. err.. Facebook.