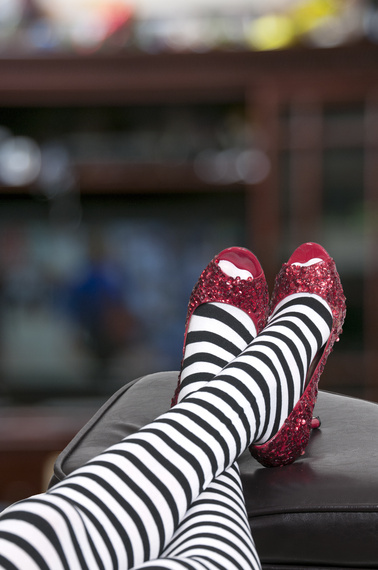 Recently I remembered with childhood joy - and that delicious little bit of fear that accompanies any memory of what frightened us then - the movie of The Wizard of Oz. That fabled story of Dorothy and "I don't think we are in Kansas anymore, Toto" - I thought again of the movie magically and seamlessly evolving from black and white to the Technicolor world of Oz; the explanation of the ruby red slippers by Glinda the Good Witch (which I still wish I could wear to click myself instantly to the place of dreams). I think about the journey of the four friends along the yellow brick road - and then my hiding behind the sofa at the appearance of the Wicked Witch, because I know she will get me, my pretty- and those horrid flying monkeys!

But what I remember most fondly is the Cowardly Lion - "Stick 'em up, stick 'em up!" - in his personal quest to be rewarded with courage as a solution to his fear.

"Courage! If I only had courage!"

Let's be honest, there are times when all of us could do with a trip down that yellow brick road to find our courage; to be given a top-up of confidence and belief that enables us take action despite the overwhelming fear that can freeze us - that is, if we allow it to.

I know this feeling well. I have faced it in releasing an idea to the world that is vitally important to me and essential to the way I do business; but then I made it a true action. I put it into words, provided case studies, research - and let it fly. I had to take courageous action, and face my fear of what people would think of me. The result? My first internationally published book "From Me To We".

Commercial collaboration, the move from Me to We, will be the biggest change in corporate culture that we have yet seen as it will significantly impact innovation, results, speed to market and employee engagement. But to future-proof all of us, collaborative working requires us to be brave, to step up and have the courageous conversations that drive change, that create action, that create momentum and in turn require us to face our fear of whatever is stopping us in our tracks. This could be others' opinions, it could be a lack of engagement as leaders, it could be a simple fear of failure - what it really is, of course, is those damned flying monkeys in whatever form they take for us as thinking adults.

When we get beyond the fear, action will happen. Fear of the flying monkeys does not have to be a full stop to action - it can be a pause to take a breath, to take a time out behind the sofa of thought, to reaffirm belief, and then - go for it.

Drive change, because you are courageous enough to do it.

In the words of Steve Jobs -

Have the courage to follow your heart and intuition. They somehow already know what you truly want to become. Everything else is secondary.

Perhaps Oz the Great and Powerful was not the fake that we initially thought he was when our friends arrived in the Emerald City. As he said to my beloved Cowardly Lion;

"You, my friend, are a victim of disorganized thinking. You are under the unfortunate impression that just because you run away you have no courage; you're confusing courage with wisdom."

So go on - reorganize your own thinking and take action because your wisdom tells you so.

And roar. That'll get rid of those flying monkeys - and it should take care of the Wicked Witch, too.