It looks overwhelmingly likely that in a few days, a huge chunk -- $85 billion -- of current federal spending will stop. Those cuts are likely to be partly restored as a result of the fall-out and public reaction as they begin to be felt, so the odds that the budget which takes effect on March 1 will remain in effect are low. But other cuts, or a combination of cuts and revenue increases, will take their place.

While this "sequester" is a moving target, and not a final result, its underlying outline tells us a great deal about what a smaller federal government -- if driven by today's deficit gawks on the right -- would look like.

It's a very ugly picture.

Begin with some federal expenditure that won't be on the chopping block -- things the taxpayers will continue to pay for. Perhaps most outrageously, $10 billion in subsidies to the oil industry -- a substantial part of which flow directly to the Treasuries of foreign countries like Saudi Arabia and Nigeria -- will continue.

These tax subsidies have no reasonable economic or environmental justification. Back in 2011, libertarian Cato Institute Scholars Jerry Taylor and Peter Van Doren awarded the president "two cheers" for proposing to dump them: "First of all, let the record show that President Obama is right and the GOP is wrong about these tax breaks. They make the economy less -- not more -- efficient and do nothing to reduce prices at the pump."

But petroleum pork is not the only dubious federal expenditure that remains untouched. So are $452 million in Obama Administration subsidies for new small "modular" nuclear reactors, the latest example of federal largesse for nuclear power plants that flunk Economics 101. Then there is $500 million a year for helping develop the dirtiest and least economic fossil fuels in the U.S. -- oil shale and tar sands.

The environmental/taxpayer alliance that prepared the annual Green Scissors Report concludes that reform of commodity support programs for big agribusiness could save $5 billion a year. And $150 million remains in the budget for one of Alaska's two infamous "Bridges to Nowhere," crossing Knik Arm. Timber companies -- particularly those engaged in logging on public lands -- will still get about $1.2 billion in subsidies.

Indeed, the Green Scissors Coalition overall identified $700 billion in wasteful and environmental destructive federal spending -- almost as much as the entire sequester!

So we can cut spending without savaging our air, water and lands -- if we want to. But the sequester doesn't.

One of the sequester's least justified cuts is $218 million slashed from the National Park System -- as if "America's Best Idea" were no longer so great. These cuts will eliminate funding to operate 100 national parks -- layered on an existing maintenance deficit of about $500 million.

Why is the Park Service -- which amounts to 1/14 of 1 percent of the total federal budget -- slated to provide 25 times its share of the budget cuts? The answer, in part, is that the sequester was designed to be a poison pill; Republicans were expected to agree to revenue increases rather than cut defense, and Democrats were intended to reform retirement and health care expenses to avoid shuttering parks. Neither political calculus worked out, but since neither side thought, or desired, the sequester to take effect, no one designed it to make rational sense as a way of cutting federal spending.

But there is a deeper perverse logic working here. One of the major goals of the reactionary right, which through the Tea Party now exercises veto control over the Republican Party, is to shrink the ability of the federal government to carry out one of its four primary functions, as laid out in the Preamble to the Constitution: "Provide for the General Welfare."

These General Welfare Functions, along with National Defense, amount to most of what we think of as "national government": medical research, national parks, food and drug safety, environmental protection, weather forecasting, education, transportation, public housing. In budget parlance, these are "discretionary domestic" expenditures, as opposed to defense, or "mandatory" programs like Social Security and Medicare, where the recipient is guaranteed benefits. The right hates General Welfare Functions precisely because they are the glue which makes the United States a "more perfect union" with a strong national government -- an outcome of the Civil War which many on the right view as a tragic defeat for their vision of a fundamental weak federated nation. Indeed, most of the General Welfare programs had their origin in the Lincoln Administration, the Teddy Roosevelt era, the Franklin Roosevelt presidencies, or Lyndon Johnson's Administration -- all anathema to the Tea Party.

General welfare expenditures have been steadily declining as a portion of our Gross National Product -- a perverse trend given that as our economy becomes more complex and interdependent, our need for government services actually increases. But $28 billion of the mandatory sequester comes from these programs -- a 5 percent cut in absolute dollars, greater when inflation is considered.

These cuts would come on top of earlier budget hits. A national coalition of groups concerned with overall federal priorities has pointed out:

".. if Congress and the president fail to act, between fiscal 2010 and 2021 NDD programs will have been cut by 20 percent overall. Such indiscriminate cuts threaten the entire range of bipartisan national priorities. For example, there will be fewer scientific and technological innovations, fewer teachers in classrooms, fewer job opportunities, fewer National Park visitor hours, fewer air traffic controllers, fewer food and drug inspectors, and fewer first responders."

The reality is worse. The Center for Budget and Policy Priorities has analyzed overall spending on these General Welfare Functions, and concluded that even without any further cuts from the sequester budget cuts already in place "will shrink non-defense discretionary spending to its lowest level on record as a share of GDP, with data going back to 1962." As the chart below shows, since Ronald Reagan's election, expenditures for domestic government services, as a portion of the economy, will already have been cut in half. 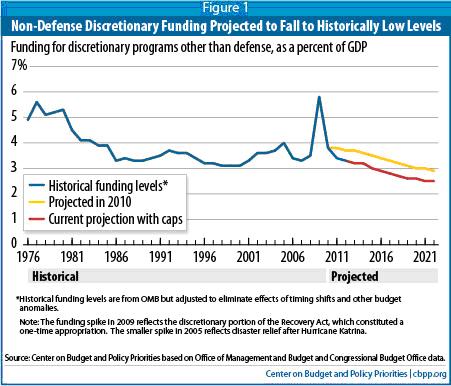 How has this happened? Political hostility to federal government services by the right has been the driving force. But this ambition has been aided by the media's unwillingness to point out an important consequence of America's aging demography:

Retirement health care and income in the United States are largely supported by federal government mechanisms -- Medicare and Social Security. So as more and more people are over 65, the percentage of our economy that flows through the federal government to retirees unavoidably gets bigger, because a larger proportion of the population is in that age bracket. This is not a sign of "bigger" or "wasteful", or even more "intrusive" government; it just means we have more retirees! We are living longer. (This is, I think, a good thing.)

But the reactionary right and the media keep focusing on the proportional size of the federal budget, saying it should not increase to more than some arbitrary number, say 20 percent of the economy. But if we keep military spending constant over time, after allowing for the wind-down of Afghanistan and Iraq, then as the retiree population grows, our investment in general welfare government services must, by this benchmark, arbitrarily decline. 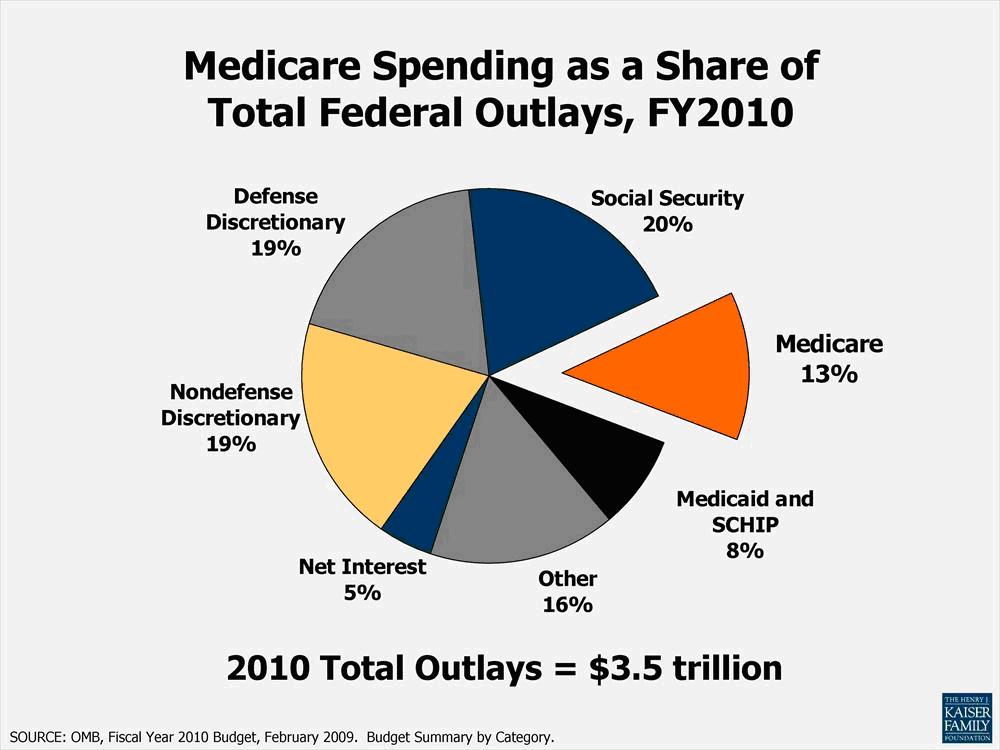 Social Security and Medicare already amount to 33 percent of federal spending; General Welfare spending to only 19 percent. Population changes alone will increase retiree spending from 33 percent to 41 percent. This, under a constant defense and constant federal share of GDP theory, would leave only 11 percent for all general government functions. These cuts go beyond severe -- they are savage. They would effectively Balkanize the United States. Critical functions now played by the federal government would of necessity fall to the states. (This, to be clear, is exactly what the Tea Party wants.) Citizens of relatively wealthy -- and largely Democratic - states could cope much better than those in poorer and ironically often Republican areas.

This is the conversation we need to be having -- not who outmaneuvered whom, or whose bonehead idea was the sequester, anyway? Are we going to be an American civilization, or a squabbling set of Balkan principalities? We may think we fought that out in 1865, but it is back again with a vengeance.