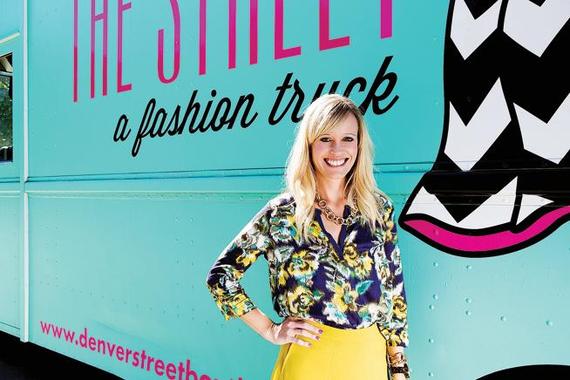 If there's one thing missing from a good food truck, it's a pair of chandelier earrings and a colorful scarf.

I enjoy a good hunk of hamburger just as much as the next mountain lion, and I know that healthy food is essential to our ability to, you know, exist. But if given the choice to splurge on food or fashion, I'm going to pick the one with staying power. The one you can use over and over again.

The food truck caravan has led to a new kind of mobile business: fashion trucks.

These boutiques on wheels began popping up around Colorado a few years ago but recently have picked up speed -- so much, in fact, that fellow truckers are expecting about 10 new fashion trucks by this summer.

One of the newest (and one of my favorites) is The Street Boutique, which claims to be the first fashion truck in the metro area to specialize exclusively in trendy, reasonably priced women's clothing and accessories.

Lindsey Trees, founder and owner, calls it a "mini Nordstrom in a truck." And, in fact, she sells some of the same brands you can find in the high-end department store, as well as a few other European lines you can't find anywhere else in the state.

Trees opened The Street Boutique in August and has focused her random and scheduled stops and private parties in Denver, but you'll see her in Boulder and Broomfield soon, she says. Keep your eyes open for her teal and pink van near area malls, or invite her to your next girly gathering and get 10 percent of the sales in credit toward your purchases.

She doesn't know of any Boulder-based fashion trucks, and findafashiontruck.com doesn't list one.

One reason people don't update their wardrobe is because they don't have time to shop. Another challenge with shopping is that department stores can feel overwhelming, or people simply don't enjoy shopping.

The fashion truck solves that by bringing a smaller, less-intimidating selection right to you.

sons for their popularity, according to Trees -- is the cost to rent retail space in desirable Colorado locations.

"Instead of fronting 100 grand to get a store up and running, we could buy a truck on Craigslist," Trees says.

Pearl Street alone has recently seen a string of high-profile closures of longtime shops, including the Boulder Army Store, whose owner cited both a decline in downtown shoppers and the price of rent among contributing factors.

In addition, Trees, a mother of two, says she needed a flexible schedule, not traditional "retail hours." She parks her van at her house and can organize inventory and steam clothes right there after her children go to bed. She can close shop any time and pick up her kids at school.

But selling in different cities does require multiple tax licenses, she says. And since the industry is new, she and the groundbreakers still are carving out the niche. Trees says she tends to make more money at organized events than pop-ups. (Although isn't the spontaneity of a fashion truck part of the allure?)

From a shopper's perspective, Boulder stylist Marian Rothschild says she believes a fashion truck would be best for accessories, such as scarves, gloves, jewelry and handbags. But be wary of making bigger purchases without being sure how the clothes look on you in a mirror with good lighting.

"Be realistic about what you're purchasing," which might very well be "fast clothes off a truck," says Rothschild, the author of the book Look Good Now and Always.

On the other hand, she adds, "It can be fun and easy, just like getting great deals from street vendors in funky neighborhoods of New York City. Who doesn't love that?"

Trees says she's glad more fashion trucks are emerging; she's not worried about competition. Some shoppers still are cautious about the idea of buying their jeans in the back of a vehicle. The trucks do the best when there's a group parked together.

"We definitely have a little mobile society going on," Trees says.