Last year, an average of 96 elephants were killed for their tusks every day to feed ever growing demand for ivory trinkets -- the new bling in Asia. If just 10 percent of Chinese families who make more than $16,000 per year buy one two-ounce ivory carving -- about the size of a piece of hotel soap -- 32,600 elephants must die. Poachers are expanding their market opportunities and are now even hacking off elephants' toenails for new "traditional" medicine cures. 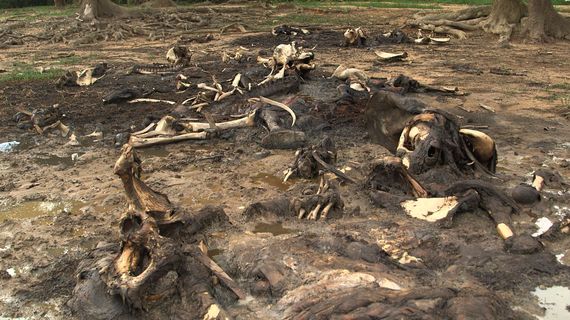 Remains of one of over two dozen African forest elephants killed at the Dzanga Bai clearing in the Central African Republic last May. Photo: © Mike Fay/WCS

Raising awareness about the plight of elephants is without doubt necessary. It has galvanized Former Secretary of State Hillary Clinton and her daughter the Vice-Chair of the Clinton Foundation to mobilize support from presidents of elephant range states to take concrete action to halt the slaughter of elephants for their ivory. It convinced President Obama to issue an Executive Order on Combating Wildlife Trafficking and establish an highly influential Advisory Council on Wildlife Trafficking. Most recently it has prodded the European Parliament to call for a moratorium on all ivory sales within the EU.

But alone it will never be sufficient to halt the slaughter.

We have credible evidence that where national park rangers and community ecoguards are out patrolling, and risking their lives doing so, elephants have a much greater chance of escaping the poacher's bullet, axe and chainsaw.

That is the good news.

But unless we tackle the trafficking networks and consumer demand, elephants will never be safe from the slaughter driven by a desire to own ivory and for the perceived prestige owned ivory confers. Enforcing the law is a start but preventing crime is better, because catching poachers with ivory does not help the elephant who died. 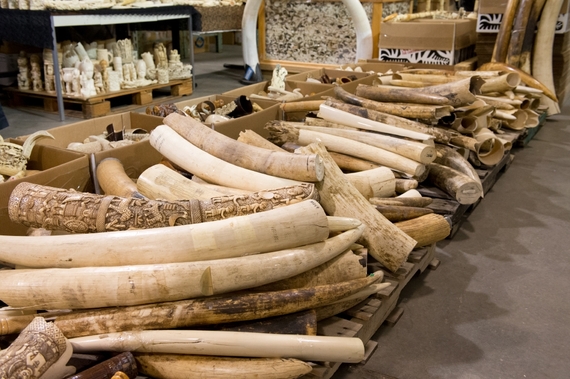 So what disincentives can we muster to curb the trade and prevent the death of the next elephant?

Great work by the conservation community is confirming our suspicion that the trade in ivory is no longer driven by poor hunters who see poaching as a quick, albeit risky, way out of poverty. It is now largely capitalized by criminal gangs - the same gangs that traffic in drugs, weapons, and human slaves. Ivory is just one more commodity in a global criminal enterprise.

So how do we take down these criminals? We could do worse than look to Eliot Ness, a late 1920s agent in the US Treasury Department's Bureau of Prohibition.

Between 1927 and 1931 Ness and his team of "Untouchables" tried to bring down Chicago gangster Al Capone by seizing illegal breweries and disrupting booze distribution routes from Canada. But what finally stopped Capone was the Treasury Department's Bureau of Internal Revenue (now the Internal Revenue Service), whose evidence resulted in the conviction of Capone for tax evasion. In other words: they followed the money.

The US has in place several very effective agencies charged with following and seizing illicit cash from individuals or groups suspected of criminal activity. As part of the United States' effort to halt international terrorism, the illegal drug trade, and human trafficking, government agencies are actively involved with their international partners in enforcing United States Code Title 18, Part 1, Chapter 95, §1956 - Laundering of monetary instruments.

Several U.S. government entities - from the Departments of Justice (Asset Forfeiture and Money Laundering Section) and Treasury (Office of Terrorism and Financial Intelligence) to Homeland Security (Project STAMP - Smuggler and Trafficker Assets, Monies and Proceeds) and US Immigration and Customs Enforcement (Trade Transparency Unit) - have the staff and experience needed to detect and seize illicit flows of ivory and other illegally traded wildlife. 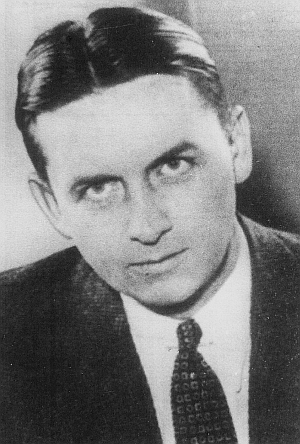 Because the criminal gangs that finance the ivory trade work in cash, they must move and "wash" millions of dollars of illicit money. Using money laundering statutes to follow the money and seize illicit funds is a potentially powerful additional way to curb wildlife trafficking.

If the US can bottle up the assets of traffickers, they will have fewer resources to finance the illegal trade. Their ability to pay the poacher, bribe the police, smuggle the ivory, and buy-off the customs officials become degraded. Over time, they may decide to get out of the ivory trafficking business because it becomes not worth the cost of forfeiting their assets.

Indeed, by taking a page from Eliot Ness elephant poachers and the thousands of other participants in the illegal wildlife trade might become just a little less untouchable.