Journalist Josh Levs has filed an EEOC charge against his employer, claiming that its parental leave policy discriminates against fathers. His public stand may help encourage needed change. Here are the details and my analysis.

Nothing fuels you to fight for what's right like the love you have for your child. - Josh Levs 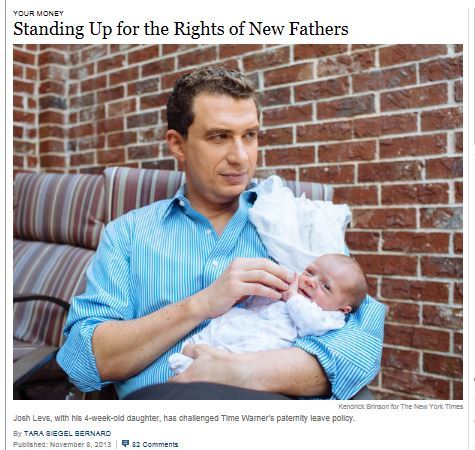 Over the past few months, I've written articles in which I encourage dads who have the financial and job security to bravely stand up so that men's family needs can be discussed and addressed at their workplaces (see here and here). While I am almost certain Josh Levs did not read my posts, he certainly has taken a bold and public stand for fathers' work-family issues.

You can read the full details on Levs' own website or in a terrific NYTimes piece on his case. However, I'll summarize the relevant facts here:

Time Warner's parental leave policy is more generous than most, especially for mothers and adoptive parents but even for new dads. According to the Society for Human Resource Management, only 15 percent of employers offer paid paternity leave. Most dads simply cobble together a week or so of accumulated time off. Further, U.S. law only provides for up to 12 weeks of unpaid leave for both moms and dads, well behind that of the rest of the developed world (in fact, we are one of four countries on Earth in which there is no mandated paid maternity leave). This despite the fact that parental leave is associated with a host of benefits for moms, dads, kids, families and society.

It is reasonable that new mothers get a somewhat more generous parental leave policy than new dads. After all, women physically give birth and sometimes have surgery. Many women are also the sole or main source of nourishment for their children. However, in the words of Levs' attorney:

...there needs to be equity between what you give a father and a mother. There can be some disparity, but the disparity here is too great. Giving a mother 10 weeks and a father two weeks is gender-based and violates Title VII. The fact that adoptive fathers, or those who have children through surrogacy, get more time doesn't help the policy -- it further erodes the legality of it. It's evidence that substantiates the irrationality of the policy.

Indeed, while it is clear to me that Levs is in the right, there is a difference between an unfair practice and illegal discrimination. For example, one could have an unfair but legal policy that employees whose last names begin with the letters "A" through "M" are eligible for leave while "N" through "Z" are not. Dads, much like folks named "N" through "Z", are not often considered a "protected class" under Title VII equal employment opportunity law.

However, it is difficult to make a fair, rational case for a 500 percent difference in the length of maternity and paternity leaves. It is clear to me that Time Warner's policy is grounded in the notion that women need time for caregiving, but men do not. This flies in the face of evidence that most families with children today are dual-income/shared-care, and that each successive generation is more egalitarian about parental roles and the division of paid and household work. From the NYTimes article:

"The organizations haven't yet caught up to the attitudinal shift among new dads," said Brad Harrington, executive director of the Boston College Center for Work and Family and a research professor in the Carroll School of Management. "Men who ask for leave time or who are more visibly active and involved in caregiving are experiencing a whole range of negative repercussions as a result of that."

Levs is bravely sticking his neck out to advance a principle. Considering that men who talk about work, make use of small amounts of available flexibility, or downshift their careers for family reasons are subject to harassment and negative career consequences (see here for details), Levs' very public legal battle will make him no friends at Time Warner. Also, considering his relatively high profile, he's probably not endearing himself to possible future employers, either. It can be hard out there for work-family pioneers.

I am not a lawyer (I did, however, talk to a few employment lawyers when working on this piece), but Levs' case has merits, but may be a hard climb. Levs has spoken out in the hopes that public pressure may help him, or at least some future dads, get access to fair and extended paternity leave. I will be watching the EEOC's decision regarding this case and will report back to you when there is news. I'll be rooting for Josh Levs and give him the final word (from his website):

I'm not giving up without a fight ... Of course this isn't easy. I'm one person, taking on a massive and powerful corporation.

But I don't want my children to grow up in a world in which people accept discrimination without a fight... especially when it isn't easy, you have to do what you know is right for the world, your family, and yourself.

I look into my daughter's beautiful new eyes and know where I need to be.

It's a feeling many other dads know. And it's heartbreaking to think that I could lose this critical bonding time with her.

This fight will probably be seen as a sign of the times and the battle for fathers' rights in general. That's fair and legit. But it's also more than that. This is about equality and fairness for everyone.

And it's about the ability of any individual to stand up to an unfair policy by a massive corporation that impacts his or her family.

Nothing fuels you to fight for what's right like the love you have for your child.

Right on, Josh. I'll be rooting for you.

What do you think about paternity leave? About Levs' case? Any experiences to share? Let's discuss in the comments section.