Santa Claus must not have received my Christmas wish list last year. Indeed, he failed to deliver the new calendar -- but not just any calendar -- that was at the top of my list.

No, last year I requested that the New Year be rung in with the adoption of the Hanke-Henry Permanent Calendar (HHPC), which my colleague, Johns Hopkins Astrophysics Prof. Richard Conn Henry, and I developed. This calendar would, among other things, create a system in which each day, each year, falls on the exact same date.

The Hanke-Henry Permanent Calendar provides a comprehensive template for revising the contemporary Gregorian calendar. It adheres to the most basic tenet of a fixed (read: permanent) calendar -- each year, each date falls on the same day of the week; in our case, every year begins on Sunday, January 1.

The year is then divided into four three-month quarters. Each month begins on the same day (and date) each year. The first two months of each quarter are made up of 30 days; the third is made up of 31 days (see the calendar below). 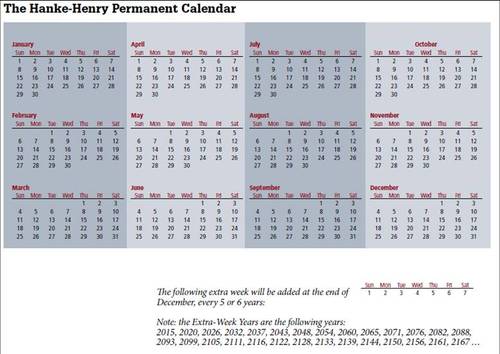 So, each quarter contains 91 days, resulting in a 364 day year that is comprised of 52 seven-day weeks. This is a vital feature of the HHPC, because, by preserving the seven-day Sabbath cycle, the HHPC avoids the major complaints from ecclesiastical quarters that have doomed all other attempts at calendar reform.

Moreover, the HHPC accounts for the disparity between the necessary length of our calendar (364 days) and the astronomical calendar (roughly 365.24 days, the duration of one full orbit of the Earth around the Sun) by simply tacking one additional full week to the end of every fifth or sixth year (specifically, 2015, 2020, 2026, 2032, 2037, 2043, 2048, and so on). This keeps the calendar in line with the seasons -- serving the same function as the leap year in the present system.

While my last Christmas wish may not have come true, 2012 did bring us a few other calendar-related events. For starters, the world did not come to an end on December 21, 2012, as the Mayan calendar had predicted. Earlier in the year, news of Iran's hyperinflation brought the solar Hijri calendar -- used throughout Iran and Afghanistan -- back into the news. And, shortly before this issue went to press, over a billion people around the world celebrated the Chinese lunar new year. Suffice to say, there are many calendars out there besides our familiar Gregorian calendar.

The multiplicity of calendars can be explained by a variety of scientific, cultural, economic, and religious factors. But, on a whole, it underscores the fact that no calendar has been able to fully address all of the issues associated with measuring and organizing the passing of time.

Indeed, there are a number of problems and inefficiencies associated with the Gregorian calendar. At present, calculating interest on bonds, mortgages, and the like with ease requires one to assume that each month consists of 30 days and each year, 360 days -- the 30/360 day count convention. This can lead to huge errors in those months that are made up of 28 or 31 days. The HHPC eliminates the need for day-count conventions altogether; the actual number of days in the HHPC 364-day-year can be used, promising worldwide benefits of as much as $130 billion annually.

Under the Gregorian calendar, the scheduling of holidays is also costlier than necessary. The HHPC would allow six existing Federal holidays to be scheduled on weekends, and it would also result in Christmas and New Years Day falling on weekends. In the U.K., one study found that eliminating eight of these national holidays could save up to 1% of U.K. GDP annually. In the U.S., that would translate to a savings of about $150 billion, or, $480 per person, per year.

The Hanke-Henry Permanent Calendar would also solve a number of calendar-generated financial problems facing businesses. For example, Apple's recent quarterly reporting fiasco would have never occurred if the HHPC was in use. Following its Q4 2012 earnings announcement, Apple (AAPL) suffered its worst one-day loss in four years, as a result of the company's failure to meet Wall Street's expectations. This was due largely to a simple calendar-generated error - most analysts failed to account for the fact that Apple's Q4 2012 was one week shorter than the same quarter the year before.

At the root of this error is the 13-week quarter problem (see R. Johnston, A. J. Leone, S. Ramnath, and Y. Yang. "14-Week Quarters," Journal of Accounting and Economics, Feb.--April 2012.). Apple, like many other companies, defines its fiscal quarters in 13-week periods. With the Gregorian calendar, this requires an adjustment (the addition of an extra week every five or six years). Apple added the extra week in 2011, and many Wall Street analysts failed to pick up on the change between 2011 and 2012.

If publicly-traded companies adopted the HHPC, quarters would be the same length, year after year, and every day would occur on the same date each year. In terms of accounting, the types of confusion and errors generated in the recent Apple case would be avoided, as all businesses would be employing the same permanent calendar and accounting conventions. There would be no need to do otherwise.

The past two thousand years have only seen a handful of cohesive efforts to standardize the modern calendar or iron out the practical kinks of those calendars already in use. Unfortunately, none have yet succeeded -- resulting in a system whose ineffectiveness has been accepted to the point of disregard. Still, there are valuable lessons to be learned from past attempts at calendar reform.

The crusade for calendar modernization found one of its most prominent champions in nineteenth-century industrialist George Eastman, the founder of the Eastman Kodak Company. Driven by a desire to create a more business-friendly calendar, he developed the "Eastman plan." One of the first cogent models of a fixed (or permanent) calendar, it was engineered to eliminate the practical and financial inefficiencies generated by the Gregorian calendar system. Under the Eastman plan, every May 1 would be a Tuesday, for example, and every holiday would fall on the same day of the week each year.

However innovative, the Eastman plan was in many respects crude, failing most crucially to account for and preserve the Sabbath. Like many past attempts at calendar reform, the Eastman plan was doomed by its failure to address religious and cultural concerns. Indeed, one of the major criticisms of such calendar reforms is that they interfered with religious days of rest, which play an integral role in the organization of economic activity, i.e. "the work week." What sets the Hanke-Henry Permanent Calendar apart is that it preserves the all-important seven-day Sabbath cycle, while also addressing numerous calendar-generated financial problems.

Unlike the failed Eastman plan, the HHPC does account for the Sabbath, and it preserves the seven-day week. In many ways, the HHPC picks up where Eastman left off. A permanent calendar is indeed the ideal model to which reform efforts must aspire; however, unless it accounts for every competing relevant force - church, commerce, politics, and the like - hopes for a successful implementation are dim.

If the timing is wrong, the introduction of policy changes can create out-sized transition costs. It's what I call "Niagara Falls Transition Troubles." When asked to describe his experience of going over Niagara Falls in a barrel, the somewhat dazed daredevil said, "Above and below the falls, it was calm, but the transition was a bitch." Yes, transitions can be difficult, especially when it comes to something as ingrained as our conception of time. That said, contrary to popular belief, when Pope Gregory XIII mandated the imposition of the Gregorian calendar over five centuries ago, the transition was not immediate.

Indeed, the story of George Washington's birthday sheds light on just how long the transition actually took. The typical American calendar has February 22 as the official birthday of the nation's first president, but the Washington family Bible points to a different date. The actual date was recorded as "ye 11th day of February 1731/32." The difference reflects the hesitant nature of the British colonies to accept the reformed calendar of Pope Gregory XIII. As a result of the decision to use the calendar system of Julius Caesar, Britain and its colonies were literally "behind the times."

However, after many years of rejection, Britain and its colonies accepted the Gregorian calendar, in 1752 -- admitting that their system needed to be changed. It was not until the 20th century that Russia and several other countries also finally abandoned the Julian calendar. This explains why the October Revolution of 1917 really took place on November 7. These historical anecdotes show that calendar systems do expire, and eventually new calendar systems are accepted. The Hanke-Henry Permanent Calendar has not been accepted yet, but this only means that there is still work to be done. It took centuries for the majority of the world to accept the Gregorian calendar after the Pope mandated it.

There is no reason why this cannot be done much more quickly today. In the past, new calendars have been mandated by emperors -- like Julius Caesar; ecclesiastical authorities - like Pope Gregory XIII; and so forth. Who knows? As the Catholic Church prepares to elect a new Pope to succeed Pope Benedict XVI, perhaps the College of Cardinals will chose another calendar reformer to take the reins at the Vatican.

But, we don't have to hold our breath for that electoral result. Today we have social media. If the Hanke-Henry Permanent Calendar goes viral, that might just do the trick, and break the grip of the world-wide consensus that embraces a second-rate calendar imposed by a Pope over 400 years ago.

This blog was originally published in the March 2013 issue of Globe Asia magazine.