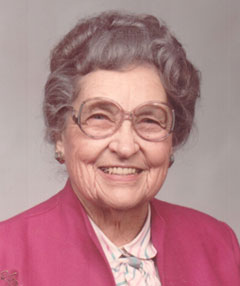 I was born into a prominent fundamentalist family in 1950 and then grew up in the midst of cultural turmoil and massive social change. My granddad was John R. Rice, famous evangelist and editor of the influential Sword of the Lord newspaper, and my grandmother was Lloys Cooke Rice.

I looked up to my granddad and loved him more than I could say, but he lived on a different plane of existence from the one I inhabited. He wasn't just my granddad; he was also smart, famous, funny, powerful and deeply respected. I was at least a little afraid of him, and his approval of me was clearly conditional on my obedience and agreement. My grandmother was different.

Gram, as I called her, had a perpetually joyful spirit. She greeted everyone she met with compassion and cheerful affection. I always knew that no matter what I did, no matter how I looked or whatever opinion I expressed, she would always be my Gram. In my heart, I knew I would always be her favorite grandchild, even though she had 28 other grandchildren who would say the same about themselves!

As a young person in the 1960s and '70s, I became active in the Southern civil rights movement and the movement against the Vietnam War. I lost the faith of my childhood. I came to think of Christianity as the religion of hypocrites, and of Christians as people deaf to racial injustice and supporters of a senseless and criminal war. I hated the evil I saw in the world, and I thought of Christians as part of the problem rather than the solution.

I was deeply estranged from my family for years, and I mourned the loss of our close ties, especially the distance between my grandmother and me. Through all my years of difficult struggle with my family, Gram displayed nothing but acceptance and uncritical regard for me. She was a key reason I returned to Murfreesboro, Tenn., every Christmas season of my life no matter where I lived or what I was up to.

For me, Gram's death in 1989 was a profound shock. I traveled to her funeral in Tennessee from my home in Seattle in a state of numb disbelief. More than a thousand people showed up at the church, and I am convinced that every one of them sincerely believed she was the best friend they had.

When I got on the plane to fly back to Seattle after the service, I began to cry, and I cried all the way home. The stewards and my fellow passengers kept looking at me with concern. They offered me tissues and glasses of water and extra packages of peanuts, and they must have been convinced I was going through a mental breakdown or profound existential crisis. When I got home I continued to cry for days, huge wracking sobs that struck me at the most embarrassing moments -- while sitting in meetings, ordering coffee or buying groceries.

When I finally calmed down and was able to reflect, I realized that my Gram was the only person in my life who had truly loved me unconditionally. She was the only one who had never condemned me, never argued with me, never judged me.

The harshest criticism I remember getting from Gram had come at Christmas time in 1977. At the time, I was a revolutionary communist working as a welder in a steel fabrication shop in Birmingham, Ala., and doing my best to overthrow the imperialist bourgeoisie. My hair was ragged, my jeans had holes in the knees, and I made a point of not shining my shoes in the belief that shoeshine was a bourgeois affectation. My grandmother gently pulled me into a private corner and said, "Andy, I hope you'll consider polishing your shoes. I'm fearful that someone who doesn't know you as well as I do might see your shoes and unfairly judge that you are not the kind, intelligent and good-hearted gentleman I know you to be." My grandmother was no one to trifle with, so I went off and shined my shoes.

As a child, I had taken Jesus into my heart. At the age of 39, after my Gram's funeral, I took my grandmother into my heart. What would my life be like if I started trying to show other people the same unconditional love she showed me? What if I acted that way toward my family members, my daughter, my friends? What if I acted that way toward fellow employees, toward neighbors, toward total strangers?

I began a series of experiments to transform my relationships with everybody in my life. The idea of God was way too big for me to consider at the time, so I set out to embody Gram's love in my life.

Quite frankly, I still find this an incredibly hard thing to do. I found that my feelings and behavior often don't match up. For example, I didn't like or love either of my parents very much after struggling with them for a quarter century. I am sure they thought I was a pretty big jerk in addition to being a world-class prodigal son. However, they were getting old themselves and soon needed a lot of help from me. Figuring out how I could treat them as if I loved them, with all the respect and affection they were due, was a hard struggle. Eventually, I began to feel that maybe I did love them after all, a little bit, and my emotions began to conform to my actions.

My grandmother lives on, loving me still, carried in my heart.

Andrew Himes is the author of the new book, 'The Sword of the Lord: The Roots of Fundamentalism in an American Family.'