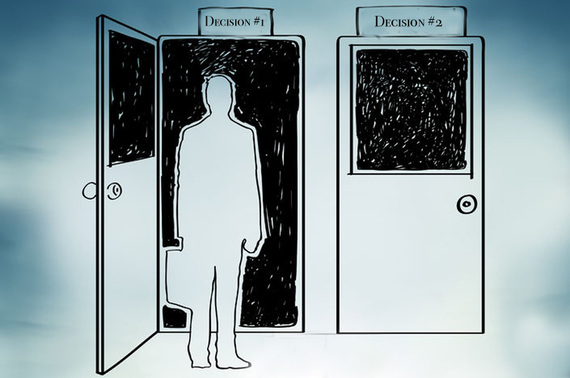 I have a theory. If each one of us took the time to consider the consequences of our actions before we said or did something, we could create a really happy life for ourselves. I came to this conclusion recently as I contemplated how to best handle a rather sticky situation with which I am currently dealing.

Quickly stated, I recently had a consultation with a doctor to whom I had been referred by the medical group in which I am enrolled. At the end of the consultation, I was a bit uncomfortable with the way he had chosen to address the matter under discussion and as a result of his subsequent actions I had decided that I did not have the trust in him to perform a surgery that I would need. But then I started to second guess myself. After all, I am not a doctor. What do I know about this procedure? But, I just could not shake the feeling that there was something wrong and that perhaps part of the hesitancy on my part was that I didn't want to confront the matter.

Then I became extremely uncomfortable about having to confront this situation but I knew in my gut that I could not just let the matter go. I knew that I did not want to create any type of a bad situation for this doctor. After all, he just wasn't the right one for me but I am sure that there are plenty of other individuals who have been very pleased with him.

I needed to find another doctor but I wasn't sure how I should do that. I considered asking my primary care physician but I had called her and asked for a recommendation before I made the appointment for the consultation and she indicated that any one of three within the group was fine. So, now I have eliminated my PCP. In addition, I don't think that I would have been comfortable walking into the same office to see either of the other two doctors that were in the same practice after "firing" their partner.

I called my second doctor back and am waiting to hear from him. As I wait for a call back, I keep running over and over in my mind how I want to explain the situation without coming off "wrong". I wake up during the night trying to figure out exactly what I want to say and then I can't go back to sleep. I am getting nervous with the anticipation. But finally this afternoon, I decided that enough is enough. I have taken into consideration all of the information with which I have to work. I have researched the names of some other doctors who meet the criteria that I need and plan to ask for a recommendation from my doctor when he calls. And if he doesn't have a recommendation, I will just have a consultation with one of the other choices and make a decision when I have met with a doctor with whom I am comfortable. After all, this is my surgery and I must first consider what is best for me and take responsibility for my choices. It doesn't really matter what another doctor may think about those choices. This is my life and I need to be comfortable and in a positive frame of mind in order to expect the best outcome. And that applies to every aspect of my life. Now I have a smile back on my face!