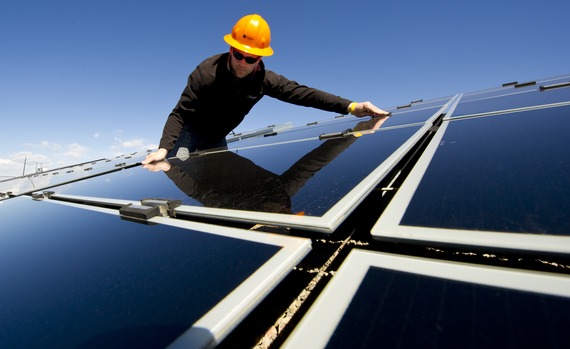 Google grabbed headlines last month with a tool that makes it easier than ever before to go solar. Project Sunroof allows its users to determine exactly how much solar power could be generated at their address, how much it would cost, and even which local companies could install the panels.

For now, the project is on trial in just three places - Boston, Fresno, and the San Francisco bay area. But by starting its endeavor in sunny California and in less sunny New England, Google illustrates an important point: with the right policies in place, going solar makes sense almost anywhere.

The states--Hawaii, Arizona, Nevada, California, New Jersey, New Mexico, Vermont, Massachusetts, North Carolina, and Colorado--all have varied amounts of sunshine, but what they share in common are programs that allow increasing numbers of homeowners, businesses, and communities to install solar panels.

All of these states--which make up 26 percent of the nation's population but 86 percent of its solar power capacity--have renewable energy requirements. Nine states have strong net metering policies allowing customers to get full credit for the excess power they provide to the electric grid.

Two very populous states with different numbers of sunny days barely missed the top 10 per capita rankings, but have strong solar markets nonetheless. New York has seen dramatic solar energy growth as a result of strong policy support from the Cuomo Administration. Texas has benefited from local solar energy policies in cities such as Austin and San Antonio.

The top 10 states, along with New York and Texas have been at the leading edge of the nation's rapid development of solar energy, which has tripled in the last three years and is adding jobs much faster than the overall economy, employing 173,000 workers across the country.

Despite the nationwide solar boom, a concerted push by utilities and their allies to weaken local clean energy laws is gaining traction, even in the nation's leading states for solar. Arizona slipped from first in 2013 to eighth in 2014 for installations of new solar energy capacity per capita, as new fees levied on solar customers in much of the state dampened demand for solar energy. Renewable energy laws are under attack in North Carolina, New Mexico, and elsewhere.

Solar power is poised to play a major role--in the top 10 states and elsewhere--in the implementation of the Obama administration's Clean Power Plan, which sets state-by-state limits on carbon pollution from coal and gas plants and was finalized last month. Our research shows that if solar power continues to grow at only a fraction of its recent rate, the pollution-free source could meet half of the pollution-reduction goals laid out in the plan.

The biggest step our country has ever taken to address climate change is possible in large part because of solar power's incredible potential. But we can't stop there. To slow global warming and ensure a healthier planet for future generations, states that follow the lead of those featured in our report can chart the course to 100 percent clean energy, with solar panels as universal as Google.