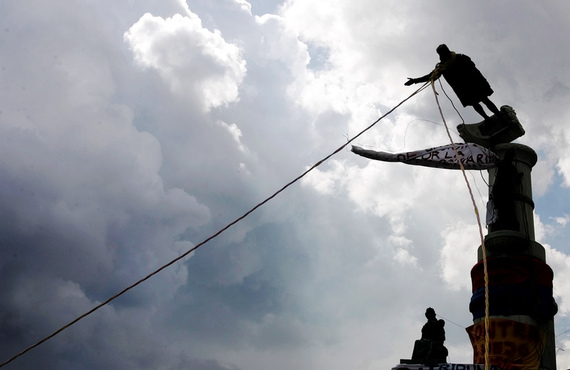 In 1934, Italian community leaders and the Knights of Columbus convinced Congress and President Franklin Delano Roosevelt to declare "Columbus Day" a federal holiday. Eighty years later, many are asking, "If we'd known then what we know now, would we still honor a desperately greedy, ruthless, genocidal, slave-trader with a federal holiday?"

About the best we can say of Christopher Columbus anymore is that he was a cheapskate. On his 1492 voyage, he promised a reward to whoever spotted land first. Hooray for sailor Rodrigo de Triana, right? Nope. Columbus claimed he had seen a "glow" the night before and gave the reward to himself.

As it turns out, the "Columbus sailed the ocean blue" song we sang as children needs a few new verses. One might be about how he murdered countless natives. Another might be how he also dealt in child prostitution, giving his sailors the perk of 9 and 10 year old girls for their amusement. His reputation was so grim that, upon the approach of any Europeans, it was not uncommon for natives to poison their own children and then commit suicide rather than face whatever torture was in store for them.

The one who many still mistakenly celebrate for "discovering" America was, in fact, a heartless slave trader who brutalized and enslaved whole islands of people in an effort to lessen the effects of his failure to find a new trade route to the Indies. Spanish historian Peter Martyr wrote at the time: "... a ship without compass, chart, or guide, but only following the trail of dead Indians who had been thrown from the ships could find its way from the Bahamas to Hispaniola."

Columbus' own contemporaries despised him. As governor of Santo Domingo on Hispaniola, he was a despot who kept all the profits for himself. A number of attempts were made on his life and at one point he was actually arrested and sent back to Spain in chains for crimes against humanity. Good thing for him he brought a lot of gold and bought off the King and Queen, who pardoned him so he could get back to work.

But Columbus was not totally without scruples. Because the Catholic church forbade enslaving of Christians, he made sure not to baptize any of the natives he was selling into slavery.

The bottom line is that what we know now about Columbus should be enough to make even the most ardent Knight of Columbus call for a rebranding of their fraternal order - and it's not PC revisionism of Columbus' reputation, either. His own journals and logs reveal a man who, even by the standards of his own day, was more opportunistic monster than heroic explorer.

From a Christian perspective, it's pointless to ask, "How did we get from Jesus to Columbus?" -- from "You shall love the Lord your God with all your heart, soul, mind and strength; and love your neighbor as yourself" to the horrors of massacres, decapitations, and child sex slavery? Easy answer: Christian history is awash in thousands of years of having been compromised by greed, violence, and the lust for power. One might try to excuse Columbus as a product of his age who practiced a kind of Christianity that was more imperialist than compassionate -- after all, nearly 1500 years of putting "conquering in Jesus' name" at the top of your priority list is a hard habit to break. It doesn't take much research to discover that, for much of its history, the only thing Jesus would recognize about Christianity is that it functions with the same modus operandi as the Roman economic, political, and military machine that led to his execution.

So what are we to do? We're left with a holiday that lifts up an unsavory tyrant who in large part used Christianity as a means toward satiating his personal greed for power and influence. Most folks don't have a clue as to the real nature of Columbus' actions and the dreary architecture of his soul; and like many holidays that involve a day off for select Americans, most people simply don't care about the origin of their three-day weekend. Plus, we've got universities, companies, networks, rivers, and whole countries named after this man. Reframing Columbus Day will be a tough sell.

But the time has come.

Any claim that one might have to Columbus having been a noble explorer worth honoring with a Federal holiday is eclipsed by the reality of the inhumanity he visited upon his fellow human beings. It's long overdue that more of us get serious about doing something different with Columbus Day. Of course, any attempt at removing it from the roster of federal holidays would literally be making a federal case out of it - and retailers would likely cry foul over a lost opportunity to offer their wares at "Blowout Columbus Day Prices!" Along with those who, despite reality, can still deny the holocaust and those who would howl over historical revisionism, there are many challenges. Accusations of anti-Italian racism, anti-Catholic bigotry, and treasonous un-American activities are sure to be heard. But how does celebrating a fabricated and corrupt idol benefit the cause of Italians, Catholics, or the integrity of Americans' shared history?

But there are signs of change: this year marks both Portland schools and the City of Seattle's decision to celebrate "Indigenous People's Day" on the same day as Columbus Day. They join the cities of Berkeley, Minneapolis, and other municipalities across the country who have either replaced Columbus Day altogether or introduced an alternative Indigenous People's Day. These trail blazers are the first step in what will likely be a prolonged effort toward redefining an observance that needs way too many asterisks and footnotes to justify why it is still celebrated.

"Columbus Day" may very well be with us for yet another eighty years and beyond, but that's not to say that, over time, it can't be transitioned into a new kind of observance, a teachable moment of repentance and wide-eyed honesty about our shared past and hope for the future.

Indigenous People's Day (formerly known as Columbus Day) is likely to be a threat to those who claim the ideology of American Exceptionalism as their doctrine and faith - but what is more exceptional than honesty, repentance, and committing to a future of treating others with the dignity and respect due every human being? America might not be grown up enough to handle it, but hopefully, before another 80 years passes, Christopher Columbus will be a footnote to Indigenous People's Day (and not the other way around).

Photo Credit: Protesters pull a Columbus statue from its pedestal in Caracas, Venezuela in 2004 (c) Reuters Used by Permission.