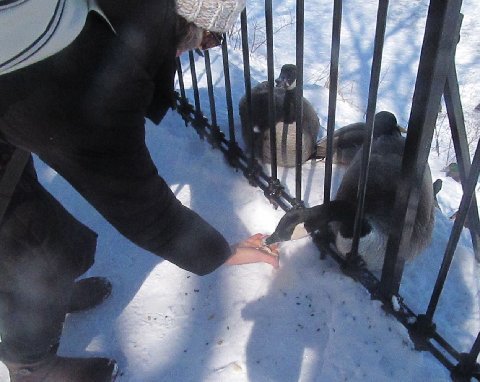 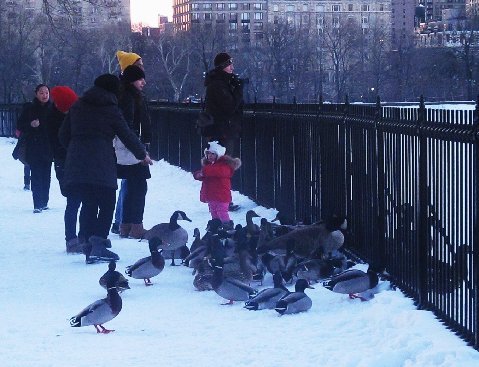 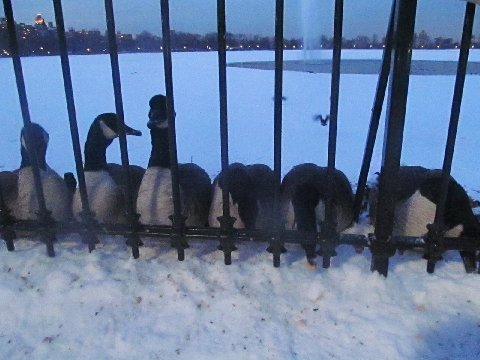 It's a perilous existence at best. The nation's swans, muskovy and mallard ducks and both resident and migratory Canada geese must contend with limited food sources in winter -- no grass or insects or vegetation of almost any kind -- and huge accumulations of snow.

The geese are used to lean times. They gorge on vegetation in summer in preparation for the months ahead. But the ducks are like farm animals. They need to be fed.

Every winter, I feed about 100 Canada geese and a dozen muskovy ducks cracked corn. Several years ago, Zo and Dad, the lead pair in my geese study group, indicated that they preferred their corn in winter just before bedding down so I'd head out every night, often in freezing temperatures with 25 pounds of grains.

One evening, I noticed geese flying in from all directions. I wondered why they were coming in at this hour. Eventually, it dawned on me. They knew there was corn here. I don't know how they knew but they knew. Word had spread ... like some regional goose hotline.

The ritual continues today. A few days ago, about 50 geese stopped here, presumably on their way to the Mississippi Flyway about 150 miles west. There was the usual territorial bickering as regional geese families balked at having to share the food with stragglers from parts unknown. I had to step in.

"We're all here to share the spoils, not argue over who gets what," I said.

I had to put out extra food for the newcomers but it was worth it to hear the sounds of delight at finding the unexpected cache ... the oohs and ahhs ... the swoons of pleasure with every bite.

It's also important that we give waterfowl foods with nutrients that replace the seeds, grains and grass for which they forage in other seasons.

"Cracked corn is everyone's favorite," says Choo Choo Love, who runs an international website, Love Canada Geese, which is filled with stories and photos. "It's nutritious and low in protein."

She also reminds us never to feed old, moldy bread.

"They can become sick because the spores cause a lung infection that can result in death," she adds.

She also recommends Mazuri Ornamental Waterfowl Maintenance food for injured geese and ducks unable to get out of the water to feed.

"The feed floats on water so it's perfect," she says.

Wild birdseed, she says, is also a good substitute.

"I like the duck pellets (from animal feed stores) because they float on the water," adds Karen Stamper, deputy treasurer for Commerce Township in Michigan, who also likes lettuce for ducks and other waterfowl.

"Romaine, turnip greens, anything but iceburg," she says.

And in locations where grains are not available?

"Pet stores around me don't sell waterfowl pellets or cracked corn," says Patty Adjamine of Manhattan. "To order online entails huge shipping costs. So I feed the ducks and geese mostly dry cat food; it floats on water and contains protein which is good for them in winter.

"I also give them bits of whole wheat bread. The geese at the (Jacqueline Kennedy Onassis) Reservoir (Central Park) come and go as I imagine they fly to lawns at night to feed. There is no grass at the Reservoir. Depending on the severity of winter, the geese at Central Park are usually the first to migrate. Usually they leave in February, but last year, they had to stay until mid-March, the winter was so brutal."

An acquaintance from New Jersey gives her geese Cherrios for treats.

When feeding, remember to spread the wealth. Never leave corn in a large pile, adds Choo Choo Love, while the others must stand by and watch. Geese are very territorial and placing the food a few feet apart allows everyone to eat in peace.

Remember that feeding ducks, geese and swans at local parks can be an exhilarating, bonding, educational experience. And in winter, there's an additional bonus: warding off starvation.