The expression "taking the oxygen out of the room" is commonly used to mean that someone is getting unwarranted attention at the expense of others. For example, in the political circus de jour, the expression is often used to describe how Donald Trump, who thinks he is really, really smart, has received disproportionate media coverage compared with the 16 other wannabes. But, whether the discussion is about immigration, Planned Parenthood, Hillary's email, or something totally really inane, clearly it is understood that no one is literally taking all the oxygen out of the room -- that would be deadly.

However, in the real world, it turns out that oxygen is being "taken out of the room" -- or in this case, the oceans. Literally, oxygen is being lost, and the reason is the upper ocean is warming.
This warming is due to climate change -- and yes, we scientists are sure that this isn't a natural cycle.

We live on a planet where the temperature of the air is the hair on the tail of the dog. The dog is the ocean. 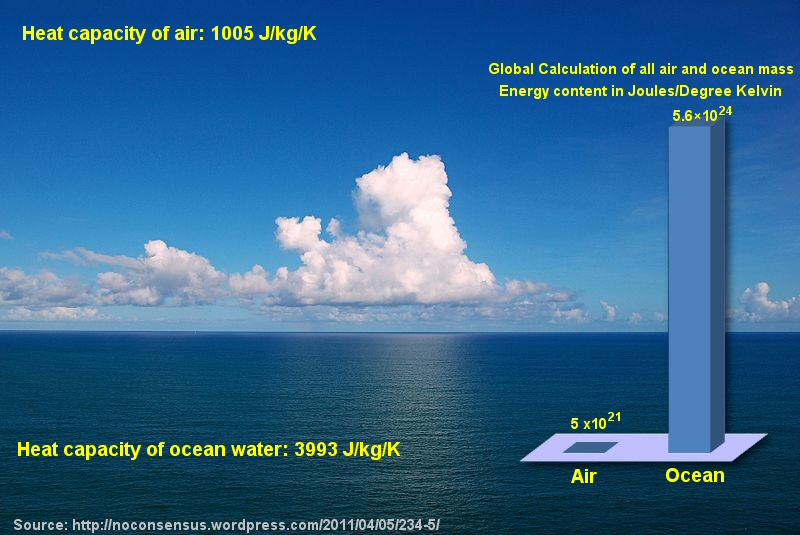 Over 90 percent of the change in the heat on Earth driven by burning fossil fuels since the Industrial Revolution isn't in the atmosphere. It is in the oceans. That is a whole lot of heat.

That is not good if you need oxygen.

The oxygen in the ocean interior gets there by being exposed to the atmosphere. Less mixing, means less exposure -- which means less oxygen gets into the oceans.

Oxygen isn't just important for fish and other animals -- it's also important for microbes. Microbes need oxygen for many processes that are critical to the core functions of the planet. One of those functions is to help make nitrogen available for phytoplankton -- the microscopic algae in the ocean that are actually generating half the oxygen we breathe.

So while the candidates for the highest office in the land are furiously discussing defunding Planned Parenthood, the oceans are slowly dying because they are becoming deoxygenated.

There are many effects of climate change that we can easily see -- the drought in California, the loss of glaciers from the Himalayas and the Andes to Greenland and Alaska, the record setting heat waves in the Middle East and southern Asia.

It is those effects that we can't see that are really critical -- the loss of oxygen in the ocean one of the most concerning to me.

In the end, nature couldn't care less who wins an election or whether or not that exalted person believes climate change is due to humans. The fact is that we are extremely efficient at finding, extract and burning. fossil fuels.

In the United States, our carbon "foot print" amounts to 110 pounds of carbon dioxide per person per day.

We just dump the gas into the atmosphere -- freely. And it freely absorbs infrared radiation from the Sun and makes this planet warm. The more we dump, the warmer the planet. That is physics. You don't get to vote on whether that is true or not. If you don't believe in physics -- try living on Venus, where the carbon dioxide levels are so high that lead will melt on the surface of the planet.
We know how to take it out of the atmosphere -- but it's expensive.

There is no such thing as a free lunch.

Unless we move much more rapidly towards building and deploying energy systems that don't emit carbon dioxide (including nuclear power), Earth will continue to slowly cook and the unintended consequences will be... well, consequential.

I don't worry about the microbes -- they will outlive us an they will go on providing their services that make this a habitable planet.

We are a fragile species -- and we don't even know it.

It would appear we aren't as smart as we think.

Whoever is running for high office should know they don't control the planet.

A little hubris may help us find solutions to our problems.