Eight months after announcing his campaign, presidential front-runner Donald Trump continues to radically shape American political discourse. He has managed to carry out a first in modern American politics by building a wildly successful presidential campaign around the Islamophobia that once lay latent in parts of America. In light of this new political reality, American Muslims and their allies are increasingly unsure how to cope with such rhetoric in a country built around ideas of liberty and justice for all.

Despite the increase in threats both perceived and real against American Muslims, I witnessed firsthand my Muslim professor, Ambassador Akbar Ahmed, the Ibn Khaldun Chair of Islamic Studies at American University in Washington, D.C., venture into the field in a Southern town rife with political tensions. But rather than facing protests or threats upon arrival in Williamsburg, Va., Ahmed was received with the sincerest of Southern hospitality. The trip also allowed me the opportunity to take the temperature of America in the time of Trump.

On Feb. 18-19, I had the honor of traveling with Amb. Ahmed to Williamsburg to participate in the College of William and Mary's Global Film Festival - a university-run festival that highlighted Ahmed's academic contributions to interfaith bridge building in an unprecedented series of three events. Williamsburg may be a bucolic college town a mere two-and-a-half hours from Washington, but it is no haven from Islamophobic rhetoric.

The main mosque in Williamsburg is surrounded with high-intensity security in response to a rash of threats, and stories remain of post-9/11 petition efforts against the university requesting it dismiss members of the Islamic Studies faculty over "teaching terrorism."

Our hosts in Williamsburg were also visibly protective of Ahmed during his visit, making sure to keep their eyes on anyone wishing to speak with him or ask questions of him during his lecture and film screening. Fear filled the air where the Revolutionary flame once burned strong.

Yet, despite the reigning tension, Ahmed's visit to Williamsburg was received with nothing short of tremendous warmth and admiration. The Global Film Festival at William and Mary, in its ninth year, features a wide array of films from around the globe, all coalescing around an annual theme. This year's theme, Film and Community, was built around both Journey into Europe (2015), Ahmed's newest acclaimed documentary film telling the story of Islam in Europe as based in fieldwork, and Ahmed's previous documentary project, Journey into America (2009), a fieldwork-based documentary exploring Islam in America and American society. If one questions whether American Muslims are being sidelined, one only needs to recognize that a Muslim filmmaker's documentary films about Islam in the West shaped the programming of an entire mainstream film festival. 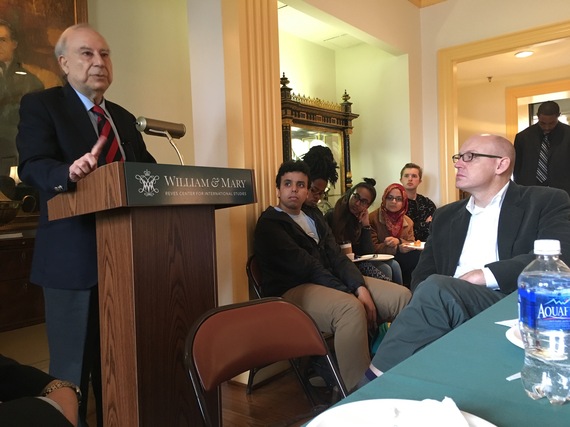 Ambassador Akbar Ahmed speaks to a full house at the College of William and Mary in Williamsburg, Va. on the increasingly urgent need for the West and the Muslim World to better understand one another for the sake of peace. The event concluded Amb. Ahmed's keynote appearances at the William and Mary Global Film Festival. Photo by Patrick Burnett.

The film screenings themselves were testimony to the mainstream celebration of Ahmed's work as an Islamic scholar. The night after a pre-festival screening of Journey into America in Colonial Williamsburg's premiere theater, the Kimball Theater, on Feb. 17, the community eagerly awaited the Virginia premiere of Journey into Europe. The red carpet was even rolled out to commemorate the film's role in opening this year's festival. Excitement filled the air. I myself was ecstatic over the film screening - Journey into Europe's most prominent to date - despite having overseen numerous screenings in D.C. and Montgomery County, Md. Not only was I seeing the film that we all have worked so hard to create and promote on the big screen in a theater built in the grand old style of American cinema, the Kimball Theater, but my own work on the film project was directly recognized by members of the Festival committee. One committee member even exclaimed his thrill in seeing my name on the big screen! Yet, beyond my own sense of pride in our project's success, my heart was warmed by the public reception of this challenging film on Islam in these trying times.

While the film screenings were massively successful on their own, the climax of our visit to Williamsburg came as Ahmed addressed a full-house of students, faculty, and community members in William and Mary's Reves Room the morning of Feb. 19. Dr. Steve Hanson, the Director of the Reves Center for International Studies at William and Mary, set the tone for the morning's lecture in naming Ahmed a true moral leader and a voice of reason in a time when we need it more than ever. And as Ahmed began speaking on the urgent need to bridge the gap between the West and Islam, it quickly became clear this would be no ordinary lecture.

Into the lecture, Ahmed suddenly began choking back tears - something neither I nor his students have ever witnessed. The sense of urgency he has spoken of for decades hit a fever pitch as he discussed the redline crossed by militants in their senseless slaughter of children around the globe.

Ahmed went on to describe how he sees not only the lives of his own children and grandchildren, but his students current and former, including Frankie Martin and myself sitting in the audience, in reflections of the 150 students senselessly slaughtered in the December 2014 Peshawar, Pakistan school massacre. Suddenly, this evil attack half a world away - one of countless across the globe - became all too real for a room filled with students, professors, and parents. In this rare show of deep emotion on stage, Ahmed transformed a tragedy in Pakistan from being just some Muslim tragedy to a true human tragedy. The issues at hand were no longer challenges in the Muslim World versus challenges in the West, but critical challenges of our collective humanity - and the entire room came together to begin confronting this reality.

In one case he argues such sentiments are exclusive to college campuses though, one can be comforted by the response Ahmed received later that same evening at the Cosmos Club in Washington, D.C. In delivering a similar lecture to a club that calls a number of Nobel Prize recipients as members, the audience - some of the senior most figures in Washington - responding with overwhelming applause and a strong commitment to not only better understanding the Muslim world, but bringing Americans closer together. Dr. Marcel Horowitz, the chair of the evening's events, in his introductions even named Ahmed "one of the most inspirational individuals I have ever encountered."

The events of this past week in Williamsburg and Washington remind us that predator America may hold the national microphone right now, but pluralist America refuses to step aside. With my very own eyes, I witnessed myriad American crowds listen to a leading Muslim voice with true sincerity over the course of 48 hours and walk away inspired to bring our fractured world together. The message from the field is clear - the power of pluralist dialogue rings at a fevered pitch in the time of Trump. 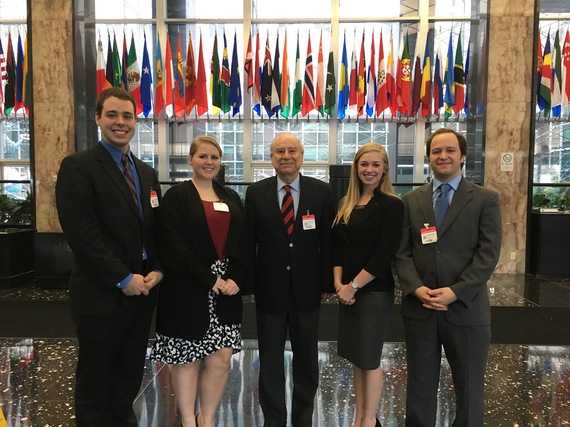 Amb. Ahmed gathers with his team, including author Patrick Burnett (far left) in the lobby of the State Department prior to presenting a preview of Journey into Europe to officials from across the agency. Photo courtesy of Patrick Burnett.