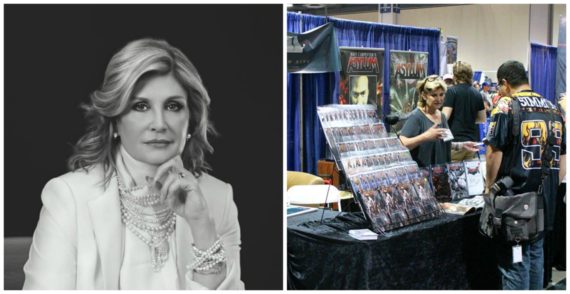 She's been involved in the production of classic films from Sixteen Candles and Rumble Fish to horror masterpieces They Live and Vampires. Her crews dubbed her with the nickname Mother Producer, and her desk is prominently adorned with a "No Whining" sign. She's Sandy King Carpenter, former Hollywood script supervisor, now producer, writer, and graphic horror novel creator: a woman of many roles and real life Scream Queen. I had the opportunity to chat with this powerhouse of a woman about her years in Hollywood and her new forays into the world of graphic novels.

You've been on set for some of the most iconic and beloved films of my generation -- from Sixteen Candles to They Live. Did you know these films would end up becoming representative of the generation in the way that they have?

Sandy King Carpenter: I don't think it works that way. You just go out there to do your job the best way you know how. Tell the tale and hope it resonates with the audience. How big that audience might be, or whether it endures from one generation to the next is not for us to know. Only time will tell that tale, as they say.

How has their ongoing success impacted you on a personal as well as professional level?

SKC: It's nice. No two ways about it. Whether you're weaving a tale around a campfire or throwing it up on a movie screen, you hope the ball keeps rolling and the story lives. You hope that you did a good enough job that those who read it, hear it, see it keep it alive. On some of the films you mention, success was a slow burn -- their later lives came up after a period of dormancy and that's pretty gratifying. Professionally, it seems to give me a bit of credibility. Sometimes. Maybe.

From your perspective what have been the more fascinating developments in the film industry during your tenure as a script developer and now producer and creator?

How have you seen the visual medias grow?

SKC: Oh my God...the candy store is wide open. We can do anything we imagine now, and beautifully! We can take audiences on such incredible journeys in the dark it's amazing. Digital compositing was first done on Memoirs of an Invisible Man, 25 years ago. Think about the digital effects that are done today on the simplest of TV shows and films. I think we're still a little stuck on not taking advantage fully of the hand-held devices and keep trying to make them mini TVs, but I really believe that they will soon change the entire texture of yet another form of entertainment medium -- something that will combine gaming and serial stories and fined entertainment. And it will be interesting to see the future of virtual reality. I think it has a chance to be more than the gimmick that 3-D always becomes in its many incarnations.

And how has it been witnessing Hollywood change over the years since the 1970s to become a more diverse arena for women and other marginalized groups?

SKC: Gratifying. Now, it's time for it to become unremarkable -- meaning the diversity in front of and behind the cameras has to get more reflective of the US as a whole. The biggest place that is happening right now -- the bravest place if you ask me -- is in commercials. Dare I say it? The mainstream corporate world is embracing diversity and pushing awareness faster than Hollywood. Who would have thought that Target would lead the pack in showing gay couples with babies picking out their nurseries and Insurance companies and General Mills would show multiracial families where we were so damn late to the party? Comics are finally getting there, but I still look for more diversity in their settings and populations -- more reflection of the real world and the real streets I walk.

Being a female leader in a male-dominated industry, and with gender and racial diversity -- or lack thereof in many cases -- making headlines of late, what advice do you have for the up-and-coming young women in visual medias?

SKC: The same as it is for anyone who wants to enter any aspect of the entertainment business -- learn it. Work hard. Don't rely on networking, social contacts and other distractions that actually keep you from the dirt work. Learn the craft and make yourself indispensable.

You've been in show business since the 1970s, going from Brat Pack films like Sixteen Candles and Rumble Fish to now almost exclusively working in horror production. Were you always a fan of the horror genre or is this something that developed after meeting your husband, Scream King John Carpenter?

SKC: I was always a fan. And it has been said that all Carpenter films are actually westerns without horses, so...maybe I just like westerns?

Seriously, I started in animation, then worked second units on Corman films and low budget horror that included such lesser known classics as Blue Sunshine and the Rick Baker showcase film The Incredible Melting Man, so my resume was pretty varied early on. I think it was actually my expertise in horrific horror that drew my husband to hire me in the first place.

And scaring people is fun. As much fun as making them laugh.

What are you thoughts on what contributed to horror going mainstream when it used to be a niche and pulp interest?

SKC: Cash. They followed the money. 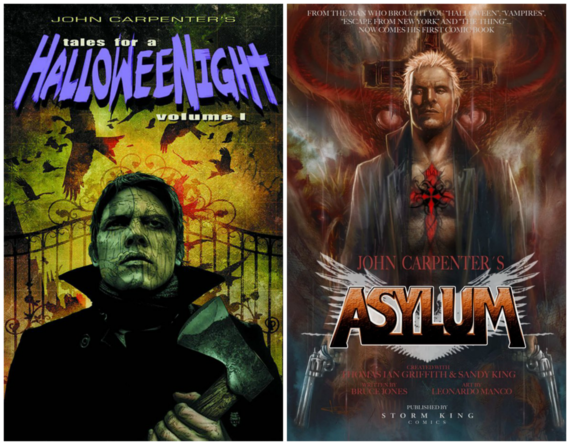 You currently have two graphic novel series out -- Tales for a HalloweeNight Vol. 1 and Asylum -- that you've co-created with your husband and a team. What prompted your foray into graphic novels?

SKC: Frustration and impatience with the current production process. It wasn't fun. In comics we can take creative risks without putting large amounts of capital in jeopardy. We can tell stories with great flights of imagination and not be marginalized by schedule and budgetary restraints. It's a freeing exercise creatively and addresses the same audience crossing over from film and video games.

What's the process in a collaborative graphic novel like your new Tales for a HalloweeNight? Are there any plans for a film or television adaptation? And when will Volume 2 be released?

SKC: Just more people invited to the party. More deadlines to be blown. Other than that, same process except that I don't work on every page other than to proof it or offer a few editorial comments. It's fun. Of course, I have an odd idea of fun...I think my next hobby will be wire walking.

No adaptation planned. These are just meant to be cool books. All the individual creators retain their IPs. The plan is to release an anthology every Halloween, and Volume 2 is in the works right now.

Your graphic novel Asylum is deeply rooted in Revelations lore, angelology, and demonology; was theology always an interest or is this something that developed through creating the book? (I have to admit that I had a hugely vivid dream about you as a demon-fighting angel badass after I finished reading the first 11 Asylum installments!)

SKC: You dreamed about me? COOL. My work here is done.

As a kid, I always thought God and the Church (as represented to me by my next door neighbor who went to Catholic school and terrified me daily with various edicts of different ways I was going to Hell) was pretty capricious. What stuck with me big time was the notion of Limbo, where unbaptized babies went when they died. That and Purgatory. Both seemed like pretty raw deals. Then one day, the Church did away with Limbo. Really? Did God agree to that? I mean, WTF? Couldn't they have talked to him earlier? And what was happening to all the kids they already sent to Limbo?

So...along comes Thomas Ian Griffith with a very cool set-up involving the Gift of Discernment -- the ability to recognize true evil and take it into yourself and dissolve it. With the added catch that while the demon/evil is inside you, you become that evil before it is dissolved. A fundamental Jekyll and Hyde. In his original idea, the priest had this ability. We split that character into two for dramatic reasons and that gave us the dynamics for the ongoing stories.

John [Carpenter] and Thomas [Ian Griffith] and I originally had thought to make Asylum as a television series, but circumstances presented themselves that seemed to make creating a comic book an interesting idea and we already had created this universe that gave us room to take off and blast through at least three arcs. It did necessitate my doing a large amount of research into Demons, Catholicism, and believe it or not, fundamentals of religions going back to pre-monotheism. In the next arc we will draw on a few things that are the basis for current Judeo-Christian beliefs and characters.

Short answer is that I really liked the idea that Beckett is the angel he had been looking for. I like the humanity inside the magical element of that. And I like the faith Duran has to come to terms with inside his very non-mystical self.

Asylum also is visually stunning and has this fantastic Constantine-eque vibe to it, and some fresh twists on the quintessential battle between good and evil -- I love the character of a defrocked priest turned demon hunter and how souls appear as doves.

SKC: Thanks. Leonardo Manco is our secret weapon. And he DID draw a great run on Hell Blazer a few years ago. The doves came about when our art director and I were talking in the front yard of the office one day and a flock of birds flew overhead silhouetted against the sun. We had been talking about how the souls would be taken from place to place and we both looked at each other and said, "Birds!" Birds have been used throughout various mythologies as carriers of the soul, so it just fit.

With the recent passing of another horror icon Wes Craven earlier this year (which broke my heart, it really did), I have to ask: what's your favorite scary movie (or a few)?

SKC: Wes was a good friend and his passing is both a personal and professional loss.

I adore old Hammer films. The Quatermass films are great and X the Unknown I can watch any time. Dario Argento's Suspiria is scary. The original Frankenstein with Boris Karloff is just beautiful.

I loved The Crawling Eye, It the Terror From Beyond Space, and both Hawks's The Thing From Another World and my husband's The Thing.

The only horror film recently that kind of got me was the Scandinavian film, Let the Right One In. A funny one out of New Zealand that totally cracks me up is What We Do In the Shadows.