Once upon a time, there was a far away kingdom, in which its inhabitants had all the luxury and commodity they could dream of. Nevertheless, despite the wealth and comfort of the realm, the old king that ruled was plunged into a terrible sadness.

The doctors said that advised to find a remedy that could take away the old king's sadness and several ministers went on a journey all over the world to find a spell or a sorcerer that could bring back the king's vital energy.

News arrived then about the existence of a white witch and a green witch that lived in the far away regions of the north. Immediately, the king ordered to bring them in front of him.

The white witch appeared after a few days in a luxurious carriage with her golden locks shining under the sun. Her beauty was so ravishing that the old king fell in love with her deeply and proposed her marriage as an exchange for anything she wanted from the kingdom. He was convinced that such a beauty would provide him the happiness that he was craving for so much.

The white witch asked for a day of meditation to think about what could she possibly want from the kingdom. Her possessions were vast and under her magic and charm, several monarchs from the world had fallen.

Her spells came from a magic energy that was inside a modern philosopher´s stone called Uranium. Although it was a powerful magic, it also had hidden lethal properties that the witch secretly knew and used for her own benefit.

The only obstacle that resisted her power was the scary green witch, owner of the valleys, mountains and rivers and protector of nature who was in her way to the palace.

The day after, the white witch went to see the king and asked as an exchange for her hand, to have the head of the green witch as a present.

The king was shocked about such an answer, but he was so in love with her beauty that, although eccentric, he accepted the requirement of the white witch and married her.

Many years later, the king realized about the difficulties of living together with the white witch. She was whimsical, temperamental and exigent and her terrible magic managed to make many of his subjects in the kingdom rich, but also had the uncertainty of causing many to die suddenly.

Since her arrival, he had heard of news about deformities in newborns, early deaths, and many other unexplainable events.

Gradually, the king realized that the unhappiness of his people and his own one had increased in number since the arrival of the terrible witch.

One day, all the fish in the sea nearby died and the crops of the fields of the kingdom began to rot. The earth became infertile and the king started to feel a terrible fear.

He went to see his greatest confidant, the prime minister, to consult him about what to do. His good friend, confessed in tears that the queen had ordered his death the following day to keep his treasures and throne.

The king panicked. He dressed up quickly in rags and, with the help of the prime minister, he started to slide down from a window of the palace to scape from the evil queen.

Unfortunately, while he was sliding down, the rope broke and he fell down and broke his neck.

Meanwhile, far away, the green witch had managed to escape from the soldiers of the king. She hid herself in between the bushes and with the help of the animals of the forest, arrived to the sea and left the shore into the ocean to hide from the king and the white witch.

Many years later, the green witch returned to the northern land of the kingdom, this time under the shape of a giant wave, that the inhabitants agreed on calling "tsunami" and she faced with fury the white witch. In their battle, many lands of the north were destroyed and the great castle of DAI-ICHI (where the energy of uranium was produced) was taken by the forces of the sea. Although thousands of people lost their lives in the struggle, the army of the sea and the green witch, finally won the war against the white witch.

The war was so fierce, that the whole world noticed about it in a few hours, and messengers ran all over the world to spread the news of the death of the white magic.

Little by little, the inhabitants of the kingdom started to wake up from the spell where they had been trapped for years. They recovered their happiness and celebrated the return of the kingdom of nature and of life.

They decided, in between all, that the battle field where the forces of the nature and the nuclear energy had fought stayed as a memory for the following generations and to honor the heroes that lost their lives in the battle by calling it "Fukushima" in honor to the kingdom of the scary white witch that had blinded the heart of the king. 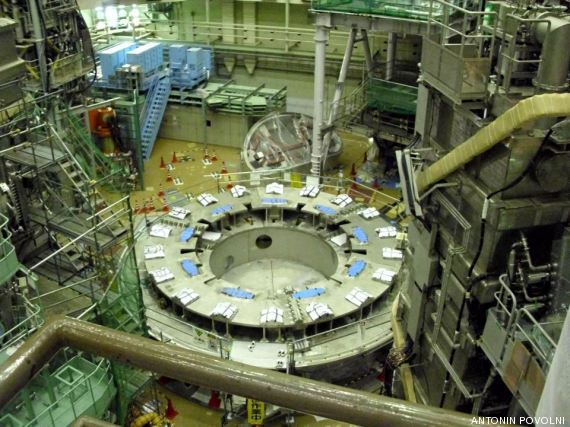 Several tales in the world saved lives throughout the history. For instance, the story of The Arabian Nights, where the princess managed to save her life thanks to the tales that she read to the king each night, or the tales of The Invisible Cities of Italo Calvino that could have been found in this territory and save many lives.

This tale is real. Or, properly speaking, it could be real. In the end, what happened in Fukushima three years ago, after the explosion of reactor number III of the nuclear plant of Fukushima DAI-ICHI is something that nobody knows if it weren't for the stories and way of looking of the journalists, the Japanese government, the volunteers or the international help groups.

The way of looking at reality and the way of telling a story is what it makes it real. Sometimes they are deformed by interests of different kinds that are even more difficult to understand than a spell.

For that reason, this tale is a look from the point of view of nature. Free of names, numbers and immediate futures. It is a claim for building a different world, in which the loss of human lives after the tragedy will not be forgotten.

The truth is that the story, as we know it, does not relate the deaths due to the tsunami to the nuclear energy. That is something that comes from the tale. It is the author´s word. It is like giving back to nature what humans have taken away from her.

Actually, nowadays, many people think that the nuclear energy of DAI-ICHI has not taken away the lives of people. Or, at least, that is what they said, before Fukushima´s first cancer hospital was opened in February 2014.

For that reason, for the lack of data, the best thing is to look with children´s eyes and instead of speaking about the inhabitants of north Japan, speak about what surrounds them. About nature and energy. Intentionally not telling.

It would be wonderful to whisper the story into the ears of people who direct countries. To the kings blinded by the beauty of economy and looking for happiness in energies that are lethal for the people (How strange that no politician has bought a house in Fukushima during the last years) and the best way to do it, has been by composing a tale, like describing an architecture. With a dimension and a comprehension of human beings that is, in the end, what defines the job of the architect. To understand people, and what they want. What they desire.

Today, Fukushima is free from development, real estate companies, or speculation and it could be said that nature has won the battle in its fields, although, maybe, in a way, it lost its value as a place to be inhabited, due to the high radiation that can be found in almost all its extension.

Today, in year 2014, this place is an orchard, an abandoned space where vegetation is higher than one meter, with wild horses, deer, hare, and wild boars that are running around the province free, and without suspecting-poor things-that nothing is due to causality.

The only visitors are the workers of TEPCO that from time to time come to the border of the province to leave gasoline and food for the 49 volunteers that still work at Fukushima DAI-ICHI reactors, one of the (still) most powerful forces of the north.

Our help group, Architecture Global Aid (AGA) has been collaborating in this area of Japan for the last three years. Through volunteering, international publications, radio interviews, t-shirt campaigns, lectures and videos, we have tried to explain the thousands of stories that we have lived here and we have built houses for the people (Origami houses project).

Nonetheless, the most important part of our work, and the main reason why we would like to raise up our carpenter´s square as architects is because of having built scaffoldings for the ideas.

Like a side-structure to support the attitude of young architects who might want to join in the recovery of damaged places through volunteering. People who might want to help to build a better world, which is in the end, a better kingdom.