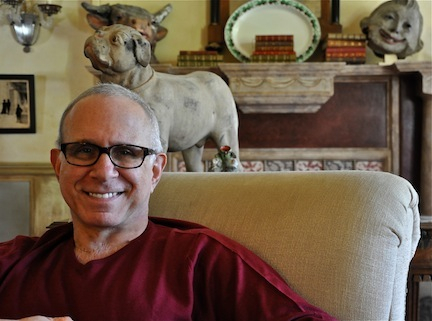 I sat down with Richard Kramer, the Emmy and multiple Peabody award-winning writer, in his North Hollywood home to talk about writing his intimate debut novel, These Things Happen.

Sixty-something Kramer is not your typical first time novelist. During his senior year in college he sent a story to The New Yorker, using it as a resume to land a job writing for their Talk of the Town column. A few months later, William Shawn, The New Yorker's legendary editor, called Richard on his dorm room phone (yes dorm rooms once had landlines) and said that The New Yorker would not be offering Kramer a writing position, but would Kramer be willing to let the magazine purchase and publish his story. An unfiltered Kramer responded, "Fuck! Are you kidding?"

After his next seven stories were rejected, Kramer spent a few decades "doing other stuff" before returning to fiction and writing These Things Happen. Here's the thing: most people would call that "other stuff" a brilliant career.

During those "in between years" as Kramer calls them, he wrote, produced, edited, and directed some groundbreaking television shows like "thirtysomething," "My So-Called Life," "Once and Again," and the "Tales of the City" miniseries. He also worked on some bad shows, because, as he put it, "You have to make a living, and at the start every show looks good."

Despite receiving awards, television writing was deemed insignificant, Kramer recalled. "No one wanted to write for television when I started. It was beneath consideration. Writer snobbism. But now, that's no longer the case as television is now culturally interesting, and culturally significant. People study TV and write about it, so now everyone wants to do it." 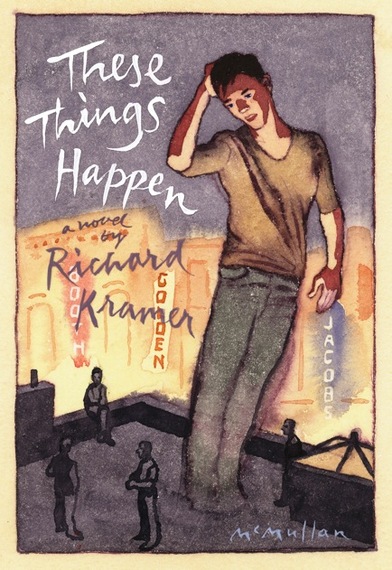 But a few years ago, Kramer says he just started writing without a plan. He filled some pages, and then more pages, with several different voices, inspired by people he had encountered over time. "I didn't know I was writing a book at first, and then I had a bunch of pages and those voices, they became more pages until finally the pages shouted at me, 'You fool! Can't you see we're a book? And could you possibly put out some snacks?'"

Eventually those pages and voices became These Things Happen, a novel set in Manhattan among a group of mostly successful, highly accomplished adults who are not even slightly self-conscious about their own self-importance. Within this group, 10th graders and long -time close friends, Wes and Theo, attempt to seek answers about their own identity.

Sharp kids that they are, they know that one can't obtain answers without asking the right questions. So Theo enlists Wesley's help in finding answers to two simple specific questions, that not only apply to every character in the book, but also to every reader: When did you know who you are? Would you choose your life?

The novel becomes a story about what happens when we are forced to address assumptions we've made about ourselves and about those close to us. The results can be disappointing and ugly, but it's the stuff that growth is made of -- it's how we find the truth about ourselves. How we become comfortable with who are.

In the novel, Wesley, has two sets of parents: his mom Lola, a book editor and her doctor husband Ben, and his father Kenny, sought after gay lawyer/activist and his partner George, a restaurant owner. These Things Happen opens with Wesley's mother Lola having sent him to live temporarily with Ken and George so that he can get to know his rather elusive dad. Lola knows that Wesley will ultimately be disappointed with his father, but she isn't seeking to put a wedge between Ken and Wes. She knows that they will have to work through the disappointment -- that it's important for Wesley to get to know his father. The alternative, attempting to shield him from disappointment, is never useful.

"Disappointment, unhappiness, they are part of life, part of living, part of participating in life. Can someone be protected?" Kramer reflected. "Lola is free to protect her son. In fact that comes out in a very unpleasant way later in the book. The novel comes from having lived and written for several decades, from having reflected on things I've seen and experienced, from a lifetime of observations."

What makes this novel stunning is the disarmingly raw manner in which the unpleasantness is dealt with and the trustworthiness of each narrative voice.

"Voice is hard to teach. It's something a reader must trust. It's the spiritual experience of reading."

I suggested that maybe Kramer's television writing made his decision to use many voices a natural choice. The process turned out to be more organic, more authentic. He said the writing took that direction on its own.

On the differences between writing a script and a novel, Kramer said, "The goal of a script is to create the least amount of anxiety for the most people. In a novel, you want to create the greatest anxiety. With a novel, you're the parent. And you're responsible for the well being. All of it . . . With a script, you're a baby sitter. You get to go home at the end of the day."

For the final third of the novel, Kramer asks the reader to shift points of view as he turns to a third person narrative. He says that this shift was unplanned, that it just seemed and allows the reader to view these final scenes unrestricted by any of the character's lenses. So, when Wesley and George are up on the roof, late at night, during the final scene, the reader can watch and listen from anywhere.

I asked Kramer if he had any advice for new writers. He said, "Don't think about it. Just write. It's not about planning. Be uncritical of yourself. That's how you find thoughts that are worthy of being captured. Don't be too conscious while you're in the process of composing a book. It gets in your way. You have to work from instinct, which is hard because it's a state of not knowing."

These Things Happen has been picked up by HBO and HARPO Films for development into a half hour comedy TV series. Richard Kramer is currently writing the pilot.

This article first appeared in FORTH Magazine on July 23, 2104.