If one examines the recent crop of new musicals it quickly becomes apparent that each of these shows was accompanied by high levels of anticipation from theatregoers.

The recent world premiere of Armistead Maupin's Tales of the City at San Francisco's American Conservatory Theatre was eagerly awaited for obvious reasons: 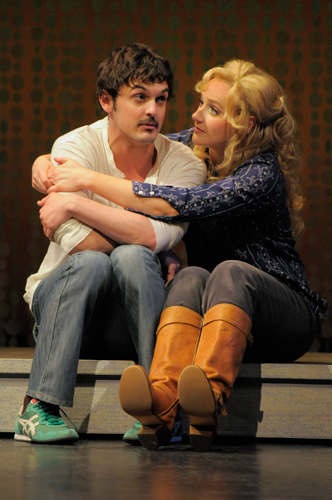 As you watch the following video clip in which set designer Douglas W. Schmidt and costume design Beaver Bauer describe their research for this new production, you'll notice something very interesting. Schmidt's eventual set design (inspired by the back stairways of so many San Francisco houses) bears an astonishing resemblance to the layout for the stage of an English Renaissance theatre (what we now think of as an "Elizabethan" or "Shakespearean" stage).

Unlike some of my friends, I chose not to rush out and re-read Tales of the City one more time prior to seeing the musical. The show's characters remain deeply etched in the imaginations of those who read Tales in serial as well as in book form. To a great extent, I think the streamlined style and strength of Maupin's writing stimulated a rare kind of emotional buy-in from his readers. I wanted to see how the musicalized version would hold the stage on the basis of its own merits.

From a technical standpoint, this is a very slickly designed show. Aided by Robert Wierzel's lighting design, Schmidt's unit set facilitates a smooth flow of rapidly changing scenes. Crisply directed by Jason Moore (with choreography by Larry Keigwin), much of Armistead Maupin's Tales of the City zips by at an astonishing pace.

From the very first beats of disco music, a parade of fond memories whisks across the stage in the form of first time bong hits, roller-skating nuns, the steam room in a gay bathhouse, and the jockey shorts contest at The EndUp (I was one of the judges at several of those contests). The very last thing I expected to experience during the performance was a pang of nostalgia at the sight of gay men dancing in high-waisted pants! Songwriters Jake Shears and John Garden have written an Act I curtain number for Mrs. Madrigal (Judy Kaye) that is the transgender equivalent of Albin's "I Am What I Am" in La Cage aux Folles. 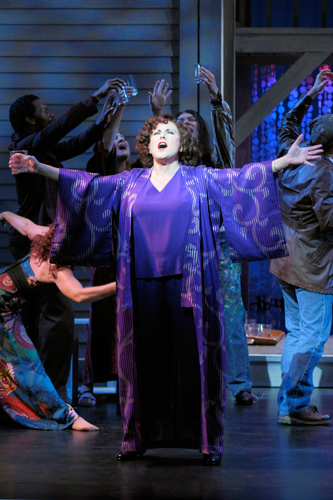 However, as the evening wears on, its weaknesses become more noticeable (I can't remember previously encountering a musical whose program did not list its musical numbers). The song written for Michael to sing when he reads his coming-out letter to his mother was so mechanical and uninspired that the moment would have had far greater dramatic impact without music.

Members of the audience who did not arrive pre-invested in Maupin's characters might find it very hard to gain traction with them or develop a sense of empathy as so many plot points go whizzing by onstage. By the time the final curtain came down I had the bizarre feeling that I had just experienced the CliffsNotes version of Tales of the City. And, as anyone who ever used them to write a paper for an English class knows, CliffsNotes may be a handy tool for understanding plot points, motivation, and the use of symbolism but they never -- ever -- create a sense of empathy for any of the characters in a novel. 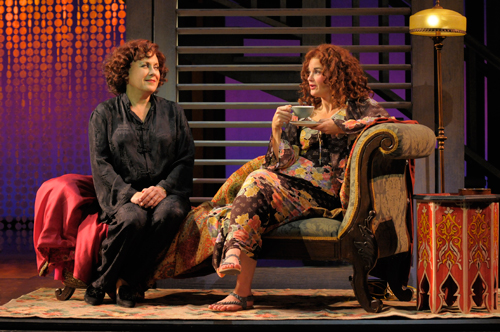 While the libretto by Jeff Whitty is extremely faithful to the source, after some surprisingly nostalgic moments in the first act I found myself responding to Armistead Maupin's Tales of the City as if it was an industrial show. Certain characters like Beauchamp Day (Andrew Samonsky), his lonely wife, DeDe Halcyon-Day (Kathleen Elizabeth Monteleone), Brian Hawkins (Patrick Lane), and Mona Ramsey (Mary Birdsong) were all present and accounted for. As in the original, one of the most sympathetic characters was Edgar Halcyon (Richard Poe).

Whereas, for many people, the emotional heart of Tales of the City was more easily found in the romantic misadventures of Michael "Mouse" Tolliver (Wesley Taylor) than the ongoing embarrassments of Mary Ann Singleton (Betsy Wolfe), in the musical version Michael and his handsome gynecologist, Jon Fielding (Josh Breckenridge), almost seem like characters who are merely peripheral to the back story of Anna Madrigal's gender identity. In Act II, when the salty Mother Mucca (the superb Diane J. Findlay) brings down the house, the show receives a sudden -- and startling -- burst of energy. 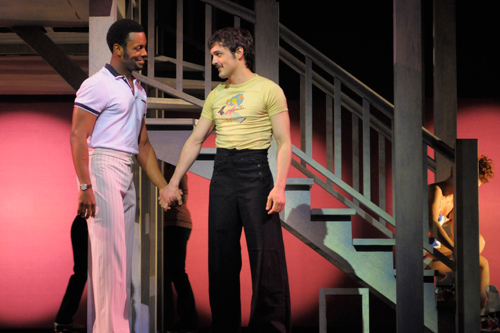 In many ways, these problems lie not so much with Armistead Maupin's Tales of the City as with the audience's changing level of awareness. While this show is definitely a period piece, it's not as much of a period piece as something like The Boy Friend (Sandy Wilson's delicious send-up of the Roaring Twenties).

As a result, there is an element of watching Armistead Maupin's Tales of the City that becomes like watching a PowerPoint presentation created from a series of family picture albums. As beloved as Tales of the City may be to Bay area audiences (and Maupin's devoted readers), I'm not sure this show can survive a Broadway transfer any more than Steve Silver's Beach Blanket Babylon. A great deal of my doubt stems from the fact that Maupin's characters -- who came to life so beautifully on the printed page and in the television miniseries -- don't have the same magnetic grip on the audience in this new musical comedy version.

As the old saying goes "Opinions are like assholes -- everybody's got one!" The above opinion is strictly my own. Due to the heavy demand for tickets, the run of Armistead Maupin's Tales of the City has been extended through July 24.