There's a new campaign to fight back against a series of anti-Muslim subway ads in New York City.

Akiva Freidlin has launched a project, currently raising funds on indiegogo, to buy subway ad space that will counter those of Pamela Geller.

Geller, New York City's most dedicated Islamophobe, is responsible for the following ads:

The ads are paid for by American Freedom Defense Initiative, the umbrella organization for the Stop Islamization of America, which has been designated by the Southern Poverty Law Center as a hate group.

Freidlin, like many other New Yorkers, wasn't too keen on Geller's latest ad, which features a photo of the World Trade Center exploding in flames next to a quote from the Quran that reads, “Soon shall We cast terror into the hearts of the Unbelievers.”

He writes on his indiegogo page:

These ads attack our most basic communal values: they try to exploit the city’s grief and anger over 9/11, and they demonize and intimidate members of a particular religious group.

That's not how we roll. Everyone has a right to feel at home in this city, and that includes our Muslim neighbors.

Freidlin, who describes himself as a "thirty-year-old white guy who lives in Manhattan," says he's the "grandchild of Holocaust survivors who came to the United States looking for freedom, tolerance, and prosperity—and found it in New York."

The "Talk Back To Hate" campaign hopes to raise $7,500 to design and buy 10 subway ads. Contributors are invited to submit ideas for the ads, and will be able to vote on the message. 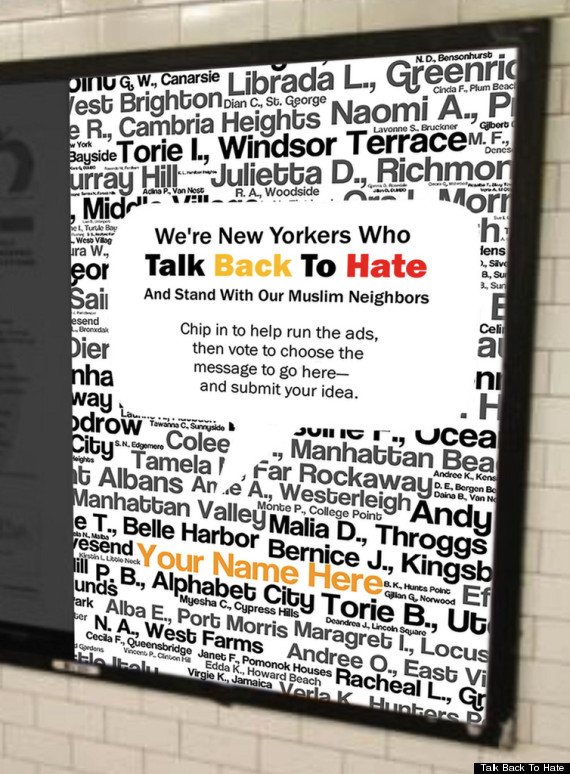 [VIA The Village Voice]