Radio Unnameable, Paul Lovelace and Jessica Wolfson's documentary about Bob Fass--the Ur albeit soft spoken radio shock jock, the precursor to Howard Stern, the postscript to Lenny Bruce and the inspiration for the last vestiges of free thinking that may be found on rogue public radio stations--is currently playing in selected theaters around the country. NPR and PRI have a template in which First Amendment dirty laundry is washed and bleached in a strong detergent of political correctness. 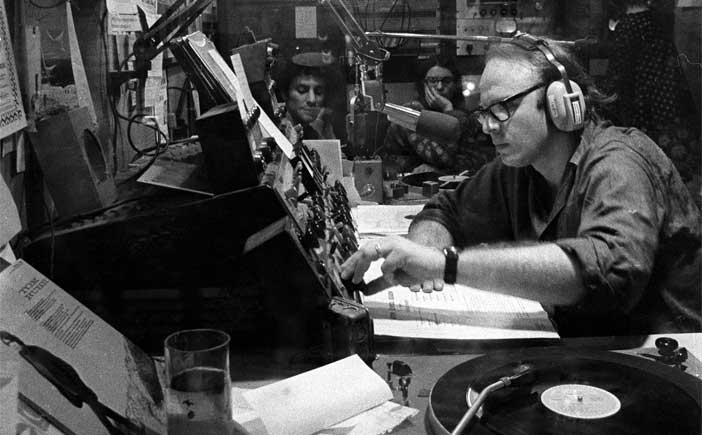 Fass, who is still broadcasting, pioneered what he called "free form" radio, which occurred in the wee hours of the morning. In fact, the clips of the era in which Fass had his heyday look like outtakes from Taxi Driver and some of the call-ins could have been part of the script. But "Alice's Restaurant" and "Mr. Bojangles," Joni Mitchell, Jose Felciano and Bob Dylan all found their way to the WBAI studios where Fass worked along with the likes of Ed Sanders, Judith Malina, Julius Lester, Abby Hoffman and Paul Krassner. One of the most joyous of the events that Fass created on the air was a party at the international terminal of JFK called the Fly-in, but there was also the Yip in (in which the hands were removed from the clock above the information booth in Grand Central Station), the Be-in and ultimately the march to the Hilton in Chicago in protest of the Democratic Convention, culminating in the trial of the Chicago 7. The intellectual horsepower that Fass was able to summon makes one painfully aware of what Occupy Wall Street lacks. If Fass didn't change the world, he certainly saved one life. One night someone named Kenny, who'd intentionally overdosed, called in and Fass kept him on the air so the call could be traced, which it was. Curiously Radio Unnameable had its Manhattan premiere at Film Forum which is right across the street from one of the homes of the old Grove Press, whose Evergreen Review published some of Fass's guests. Right down the street from the old Grove Press, at 220 West Houston is an AA clubhouse, housing a meeting called Midnight, that in Fass's heyday was an afterhours club catering to pre-op transsexuals. How times do change!

{This was originally posted to The Screaming Pope, Francis Levy's blog of rants and reactions to contemporary politics, art and culture,http://www.screamingpope.com/2012/10/radio-unnameable.html}