We give too much to our children. We do it out of love, I know, but that doesn't mean it's a good thing in the long run. We stop spoon-feeding kids at a certain point, right? So why just keep on giving them everything they want all the time?

Studies show that most parents would rather talk to their kids about drugs and sex than finance, because those are things that parents actually understand. This is a huge concern. When we give, a kid learns how to receive. The problem is that some lessons get lost in giving, key lessons such as appreciation and merit. And let's face it, a milkshake tastes a lot better after a hard workout than after a long movie.

Sometimes I wonder what ever happened to tough love. I know a man born into fabulous wealth and privilege, one of those upbringings. He had it all: servants, luxury, anything he wanted. No one ever said no to him, because he was the scion of power and money, destined to inherit everything. His education was the best that could be offered, and he worked for many years as a high-level civil servant, with broad executive powers. He was wooed into the private sector, which paid him staggering amounts of money to manage things his way. Eventually, when he hit midlife, he divorced his wife of many years and took up with a much younger woman, retired early, and hit the golden road, propped up by his pampered, charmed existence.

But the money started to drain away, slowly and irresponsibly. He and his new wife spent without a shred of conscience, as he had never denied himself anything. There was a currency crash, an asset freeze, all sorts of changes that made him have to look at his finances. Even he couldn't believe what was going out the window, now that his fortune was finite, but he didn't know how to stop. His unhappiness came to a head when he asked his ex to take him back. He admitted he needed to be cared for, and that debt, never even a word he understood, now scared him. She'd grown up without a penny, earned everything that had come her way, and told him that now maybe he'd begin learning something. Oh yeah, she didn't take him back. I wonder whether, had he learned the right lessons as a kid, things might have turned out differently.

After all, we really do give too much to our kids. They seem to get most anything they want, and don't get a sense of value, or cost. It's just I need this, I need that. A lot of it is peer pressure too.

Delayed gratification isn't something we push, probably because we naturally want to indulge our children and make them feel better. And probably because they see us acting in the same way. We not only keep up with the Joneses, we have trouble keeping up with ourselves.

My three children certainly have had a different experience than I did when it comes to learning about the value of things. This is why it's most important to have an open discussion with them about money. Straight talk about where money comes from.

The catalyst to having the conversation occurs whenever there is a request to spend. Apps on iTunes alone provide my wife and me with three or four opportunities a week to explain the value of money!

I've met people who have lots of riches and lots of stuff, but who don't seem to be happy. I've personally seen people go through it in my family, and every time the experience has made me want to change my ways. 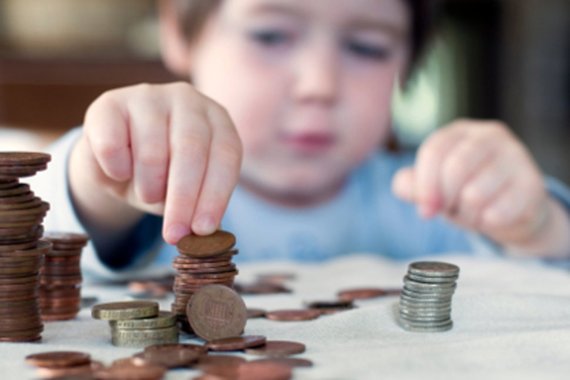