Embattled by criticism that Silicon Valley is short on diversity, tech industry giants like Google, Twitter, and Ebay have vowed to expand the ranks of their minority and female employees.

Bringing diversity to the innovation movement has been central to our work for many years. One lesson that we have learned is the importance of the words we use to inspire the people we work with. Words can polarize or attract.

Hillary Clinton is learning this lesson in her campaign, with advisors coaching her to use terms such as "count me in" and "working really hard." The idea is to build her appeal among African American and middle class voters who are critical to her success.

In the tech sector, we should be just as thoughtful about messages designed to bring diverse innovators to the job.

At the top of our list of terms that the innovation community should use more discriminately one of its classics: "Fail early, fail fast." It is intended to be a rallying cry. It fact, its use may well inhibit efforts to attract the diverse talent pool that yields the best possible innovation.

The phrase "Fail early, fail fast" (or close relatives like "Fail better" or "Fail forward") was popularized by Silicon Valley entrepreneurs with proven track records of creating market-changing products. The mantra is pithy and memorable. And it's also counter-intuitive, bucking 18 years of traditional American education that teaches us to dread failure.

Clearly the phrase reverberates for some - perhaps liberating them from fear of failure. Yet we wonder if it also alienates others. Why? The concept of "failure" is amorphous. To one person, failing can mean miscalculating the tolerance on a part for manufacture and setting back production by a week. To another person, failing can mean losing one's life savings, making it impossible to put food on the table, pay for textbooks, and cover bus fare to work.

Failure is a privilege to those of us who know we have the financial and social support to recover quickly from failure. As upper middle class innovators, if our start-ups go bust, it will be painful, but we have family and friends who will help us get back on our feet. We can take more risks, because we can see the safety net is not far below. 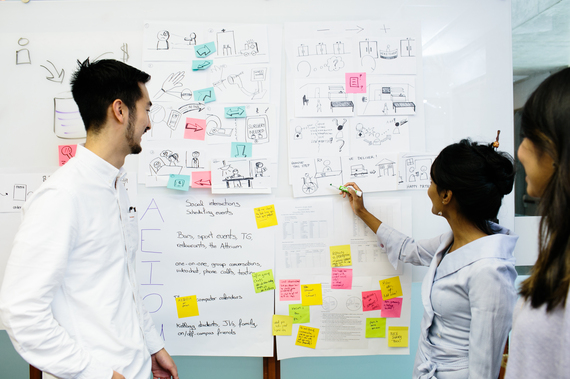 For many others, however, the safety net is frayed, and the landing may hurt significantly more. Particularly for novices, it seems disingenuous to ask them to "embrace failure" in one part of the life when "failure" in a math class or "failure" to pay rent may mean they lose their scholarship or get kicked out of their apartment.

Over the past seven years at Design For America at Northwestern University and the Maker Education Initiative, we've worked with thousands of innovators from ages 5 to 99. They include engineers working on everything from increasing response time to emergency disaster and health educators addressing obesity issues and more. During this time, we've become sensitive to how language affects participation, and we've experimented with new ways of advising innovators of the importance of learning from iteration.

Based on these experiences, we offer two alternatives to "Fail early, fail often."

1. Learn early, learn often. Remember that the goal is to be constantly learning by doing. Learning happens when we try things and get feedback. Based on 20 years working with Silicon Valley innovators, University of California- Berkeley business school professor Sara Beckman likens the innovation process to learning. Innovators learn best when they try to do something they haven't done before, get feedback on their work, and reflect on what they have learned.

2. Experiment every day. Experimentation tests assumptions. By testing assumptions every day, you are less likely to hold onto incorrect beliefs that result in costly re-designs later in the development process. Harvard Business School Professor Stephen Thomke finds that companies with cultures of experimentation are more profitable than companies with long product development process and isolated testing. In a year and half long study of innovation at a Silicon Valley high tech firm, our own research found that regular experimentation with low-fidelity ideas led to a perceived sense of progress and reduced anxiety about the experiments that did not succeed. While experimentation takes time and resources throughout a project's early stages, the tactic pays off during the final weeks of development.

To be sure, these phrases are not as simple or as counter-intuitive as "fail early, fail often." But they are inclusive, fostering the diverse culture that promotes the best solutions to complex problems.

For some, failure is a privilege. But by adopting messages that reinforce the virtues of experimentation, learning, and small wins, we believe Silicon Valley leaders can greatly improve the composition and quality of their teams and the ideas they produce.

Liz Gerber is Associate Professor of Design, the Faculty Founder of Design for America, at Northwestern University, and Public Voices Thought Leadership alum. She is an expert on how organization and technology supports/impedes innovation.

AnnMarie Thomas is Associate Professor in the Schools of Engineering, Entrepreneurship, and Business at the University of St. Thomas. She was the founding executive director of the Maker Education Initiative, and is the author of Making Makers: Kids, Tools, and the Future of Innovation.