There comes an uneasy moment in the life of a longtime, anti-establishment agitator when one realizes that she's viewed as ... the establishment. While there's no "Question Authority" T-shirt under my blazer, I still question and push back on (and sometimes get arrested by) the authorities. Still, when younger Americans look at my generation and how we've fallen short on important issues of opportunity, equality and justice, I find myself on an unfamiliar side of a generational divide.

Who can blame younger Americans -- millennials, in particular? They're the most educated generation to date, but they're drowning in student debt. Many entered the workforce during the Great Recession and its long hangover -- and economists say they, as a group, may never fully recover. No wonder they're anxious and angry -- this generation may be the first in recent history to do worse than their parents. It's now about freelancing and the sharing economy -- not home ownership and job security. No wonder only eight percent of millennials have much confidence in Congress -- type "do-nothing" and "Congress" into a Google search, and you'll get 51 million hits. 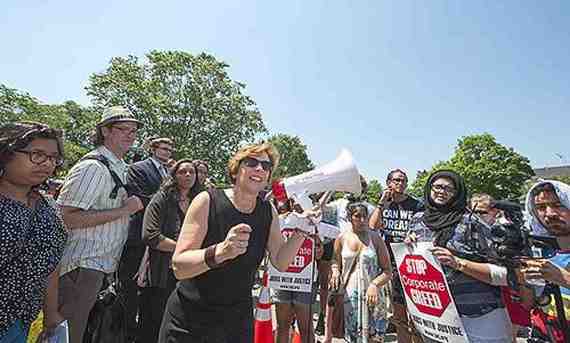 Randi Weingarten at rally to reduce student debtWeingarten and fellow activists outside a 2013 Sallie Mae shareholders' meeting, where they called on executives to meet with students about college debt. Photo by Michael C. Campbell

That number may rise after last week, when congressional Republicans and Republican presidential candidates put politics above principle and laced their "condolences" upon Justice Antonin Scalia's death with defiant refusals to consider any candidate President Obama would nominate to fill the vacancy on the Supreme Court. How ironic for so-called strict constructionists to decide that, in an election year, they can flout Article II of the Constitution, which requires the president to nominate and the Senate to confirm Supreme Court justices.

It's a reminder that for progressives' fights against injustice and intentional polarization to be effective, they must transcend generations. Take the civil rights movement, which at the height of its strength was a cross-generational movement. Ministers and rabbinical students, the Student Nonviolent Coordinating Committee and the Brotherhood of Sleeping Car Porters -- young and old, of many races and backgrounds, pushed toward justice.

America's labor unions wage these fights. Millennials understand that -- a strong majority of people aged 18 to 29 surveyed by the Pew Research Center holds a favorable view of labor unions. Rightly so -- union members earn better wages and benefits than nonunion workers. Unions allow workers to have a say in the workplace. And, where union membership is higher, children are better off.

Millennials are helping to shape the AFT, and the AFT is working to give this generation a leg up. The AFT has the longest-established graduate teaching and research assistant local unions in the country, and the leaders of those locals are among the youngest elected leaders of unions in the United States today. The AFT has an array of teacher leader programs, including the Florida Education Association's FYRE (Florida's Young Remarkable Educators) program, which taps promising young educators and provides them with opportunities for mentoring and leadership roles in the union, and to connect with others interested in driving change in the profession.

The AFT also is working to make college more affordable. Some AFT affiliates are using tools developed by Jobs with Justice to offer online guidance and workshops to help people pay off student debt, which grows by an estimated $2,726.27 every second, according to MarketWatch. One workshop participant cut $600 from her monthly loan payment.

Both Democratic candidates for president also have proposals to address college affordability. We favor Hillary Clinton's New College Compact, which translates the value of affordable college to a sustainable plan that allows students to attend a four-year public college without taking out loans for tuition or to attend a community college tuition-free, encourages states to invest in higher education, and reduces interest rates for people with student loans.

Bridging generational divides takes giving people voice and listening to things that might be hard to hear. My generation hasn't left the world in such great shape, though not for lack of trying. So I'm asking my fellow baby boomer idealists to understand millennials' frustration, to tap into their incredible energy and to recognize their passion and altruism. Maybe if we work across generations, together we can create a better America that ensures opportunity, equality and justice for all.