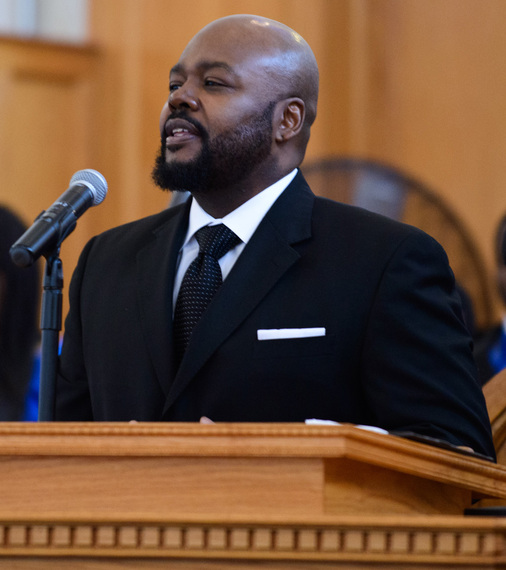 John Fountain, who frequently gives inspirational talks to inner-city youths, often tells them that using proper English is not uncool but a necessary tool for success.

CHICAGO--It was a strange and unexpected voicemail message left on my office telephone at the Washington Post, where I worked at the time as a staff writer--a blast from the past, the voice of a childhood friend.

"Wassup, John?" the message went. "You've changed," he said, chuckling. "You sound like a white boy talking on your voicemail message."

A white boy? Hmmm, I thought to myself, though understanding full well what my old friend meant. He was referring to my clear diction, the inflection and spoken-English perfection, the absence of any detectable Ebonics and ghetto slang.

I had heard it before. Still do. People sometimes marvel that I can speak "so well" having been raised in the 'hood. My mama always expected and demanded nothing less.

Mastering the King's English is no more a betrayal of one's roots
than choosing a mode of transportation to get you to a destination.

Clearly, in my friend's eyes, my transition from ghetto America to mainstream corporate America had cost me a piece of my soul as evidenced by my apparent speech betrayal. But I have long been bilingual--a son of one world, a migrant son in another that requires that I understand and also that I can be understood.

I have come to understand that your speech does indeed betray you. For one's enunciation and command of the English language can be as revealing about our roots as a buttered southern drawl. But in my mind, mastering the King's English is no more a betrayal of one's roots than choosing a mode of transportation to get you to a destination. The point in either case is access.

For me, there was no greater vehicle for changing my status from ghetto black boy to successful American black man like learning to communicate effectively--in the spoken and written word. Both were at the core of my education and extrication.

And I believe they remain important bedrocks for future generations of boys and girls--especially black and brown--who, like I once did, find themselves today drifting far from the shores of the American dream, dwelling in hyper-segregated communities, separated by that great divide: language and ideas.

This is exacerbated by the perpetuation of this idea that for black folks to use proper English is to "talk white."

This is a foolish notion--as foolish as the reality that for far too many young black men, to be smart, to excel in the classroom, and to love books and knowledge is still perceived by many of their peers as an effeminate, nerdy or otherwise most undesirable trait--one that too often sets them up for public ridicule or bullying.

I remember years ago how at one school in Southeast Washington, D.C.--a neighborhood much like K-Town, where I grew up--it was the practice of some young men at honors assemblies to duck their heads or cower in their seats when their names were called to avoid being publicly singled out for being smart.

I am all too familiar with a culture that shuns schoolboys and embraces athletes and thugs--aware that families can somehow always seem to scrounge up the funds for bail, for "all white" prison-send-off parties and prison-return parties for wayward sons, but offer little support for books and supplies to young men seeking higher learning and to walk the good path.

I am aware that some things still haven't changed; that being smart or a schoolboy still ain't cool; that rude boys and gangsters still get the girl; and that the groveling, often hard-to-understand ghetto talk still embraced by one world can cripple a child in another.

When speaking to young people across the country, I often retell the voicemail story.

"...What was I supposed to record as my voicemail message at the Washington Post?" I ask them. "Yo, wassup, this is John, leave them digits and I'll holla back, peace."

The kids crack up laughing. So do I.