Two years ago this month, I stepped onto what most would consider a proverbial third rail in politics: I opened up about my personal sexual health. To be specific, I announced to the world that I take a daily pill called Truvada or PrEP (pre-exposure prophylaxis), which if taken consistently reduces the risk of HIV transmission by nearly 100%. PrEP has the potential to wipe out new HIV infections, which is critically important as we continue to see 50,000 new HIV infections annually in the United States and two million around the world.

Many friends advised me against making this disclosure, since who knew what would happen politically if, as an elected official, I were to open up about my sexual health. Yet, my gut told me to talk about it, since PrEP was struggling to take hold among gay, bi, and trans men for lack of awareness, lack of access due to cost, and the incredible stigma that still surrounds talking about our sexual health. Just ask the woman who was slut-shamed by Rush Limbaugh for stating that she was on the birth control pill.

I would not be deterred. I made the announcement and braced for the worst. Could I lose my career? Would I be attacked in the press? How would people react to a politician admitting that he actually has sex, and in so doing remind the world that men continue to have sex with men? Much to my pleasant surprise, the worst didn't come about. Quite the opposite, the reaction to my disclosure was overwhelmingly positive - from LGBT people, from straight people, from parents, from public health advocates, from just about everyone.

A mother from the Midwest told me she'd never heard of PrEP and was going to talk to her gay son about it. When I think about that awkward yet awesome conversation happening - an open and honest discussion about sexual health between a mother and her gay son - I am filled with awe about how far we have come as a community and a country.

Various gay men told me they were on PrEP, but had kept it a secret due to shame. With my disclosure, they now felt comfortable talking about it. Talking about PrEP with one's social network is incredibly important. Stigma around PrEP - with lots of sexual judgment - is particularly intense in some quarters, including those who claim that PrEP reduces condom use and who falsely refer to the medication as a "party drug." Of course, it doesn't take a PrEP pill for people to avoid condoms. Before the advent of PrEP, five out of six gay men were not using condoms regularly. Condoms reduce HIV risk by 70%, whereas PrEP reduces risk by about 99%. Condoms and PrEP, together, basically obliterate risk.

And, let's face it: people don't like condoms - a provocative, yet accurate, truth to acknowledge. For a long time, if you were gay, condoms literally saved your life. Condoms still play an important role in sexual health, yet a lot has changed in recent years. We need to be open and honest about the realities of how people have sex rather than stick our heads in the sand and think we can badger people into having sex a certain way. Sexual health is about meeting people - all kinds of people - where they are, and not shaming them into being where we might want them to be.

Other gay men told me my disclosure motivated them to talk to their doctors about whether PrEP made sense for them. Some hadn't even known that PrEP existed, while others had simply never considered whether PrEP was right for them. These responses show just how much work remains to build awareness around this powerful HIV prevention tool. If my revelation helped just one of these individuals take steps to protect himself from being infected with HIV, then speaking out was worth it.

But, despite the successes we are seeing around PrEP, we still have enormous work to do.

Lack of affordability is a major problem. Way too many people who could benefit from PrEP simply can't afford it, either because they don't have insurance or have insurance with high co-pays. Too many medical providers either don't know much about PrEP, dismissively tell patients just to use condoms and not to bother with PrEP, or respond to patients with sex shaming. And, too many people don't think about whether PrEP makes sense for them or don't even know what it is.

Here in San Francisco, our Department of Public Health has launched a fantastic public information campaign to increase awareness around PrEP. We are also funding programs to increase access to PrEP. 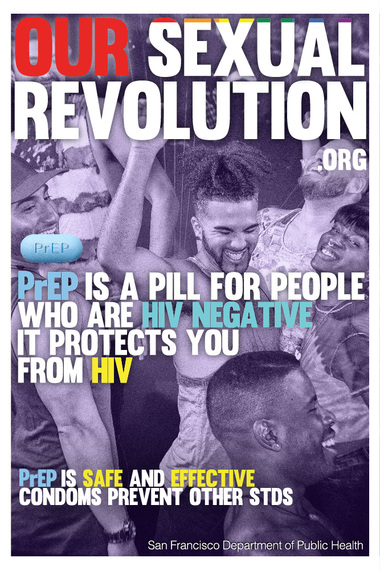 These are great steps, but we are just one city. Other cities and states need to join this movement in promoting awareness and access to this life-saving medication, as New York did.

I'm glad that the public discussion of my own use of PrEP played a small role in moving this conversation forward. As individuals and a community, if we can talk more openly about sexual health - and stop treating it like a taboo subject - we will be healthier. More people will access PrEP and remain HIV negative. More women will access birth control and receive the HPV vaccine. By being open and honest - and by supporting each other as did the many people who supported me after my disclosure - we can move this conversation forward together.

Scott Wiener is a member of the San Francisco Board of Supervisors and a longtime LGBT and health advocate.

Member, San Francisco Board of Supervisors