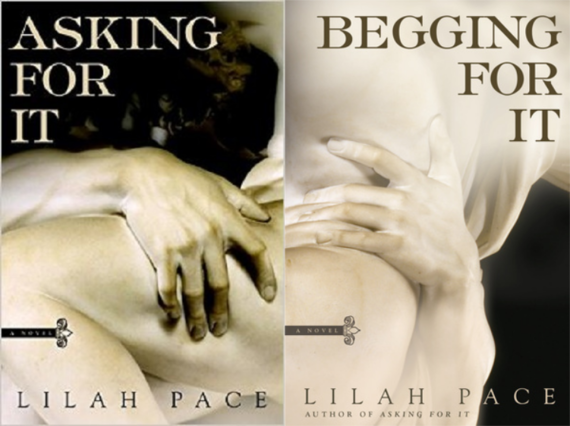 Lilah Pace is a pseudonym for a New York Times-bestselling author, who has lived everywhere from Italy to the United Kingdom before putting down roots in the American South. She recently ventured into the erotica market with her debut novel, Asking For It and the follow up, Begging For It. Instead of dipping her feet into the water, Pace took the plunge and wrote a controversial tale of consensual fantasy play. I was lucky enough to ask her a few questions about her work.

MW: Are the titles to the Asking For It series subversive? When I first saw the name of the book, I'll admit I was hesitant to read. Then after getting into it, I realized the title wasn't as transparent as it seemed.

LP: The titles were meant to undercut that phrase, to twist it so that it truly is about Vivienne asking for what she wants for her sex life and getting it, on her own terms. I also hoped they'd also serve as trigger warnings of a sort, because I never, ever wanted anyone who would be damaged by this kind of material to pick up the book, even accidentally. The title ASKING FOR IT would be enough to make sure that any person in this situation would be warned and steer clear.

MW: In a society where the term "rape culture" constantly stirs up heated debate, how did you prepare yourself to defend your vision? For me, it was a powerful statement to see the traditional roles of victim and perpetrator deconstructed into an extremely intimate and affirming exchange.

LP: In all honesty, I've been lucky. When we were bringing these books to publication, I anticipated much more pushback than actually resulted. Most people who have read the duology seem to understand what I was going for, whether or not it personally worked for them. But I thought there was something sexy and wonderful in a woman breaking through her shame and fear, and finding a man who's working through his own personal demons. Together they create a space where they can live out a seemingly brutal fantasy safely and consensually, and that process requires so much intimacy and trust that the rest of the relationship can be built on that bedrock.

MW: Although the Asking For It Series revolves around this super sensitive and controversial sexual fantasy, you manage to make the story about Jonah and Vivienne and not about their mutual sexual fantasy. The books are neither pedantic or preachy by any stretch of the imagination. How did you mitigate the topic and deliver a tender love story despite the heavy subject matter? Is this where the role of Vivienne's therapist, Doreen comes into play?

LP: It's so good to hear that the relationship really worked for you. The romances I've loved best have always been the ones where you feel that these two people are unique individuals who complete each other in a deeply fulfilling way. So I tried to delve into their lives beyond the context of their relationship. When you see their interests and quirks, and get a sense of how they live day-to-day, hopefully it becomes clear that Vivienne and Jonah are good for each other--even totally apart from their shared kink.

Doreen is a part of that, for Vivienne, because I thought it was important that the readers know Vivienne doesn't see herself as a victim. She went through something traumatic and painful, and but she's not willing to let that define her. She's working through it. She takes responsibility for her own healing. And Doreen is able to say some of the important things that needed to be said about rape fantasy--that it's common, that it has no one cause, etc.--without coming across as preachy. It's Doreen's job to talk about this stuff.

MW: Where do you go from here? Is evoking the controversial and taboo part of your artistic criteria for writing erotica? Can we expect more themes that push the envelope and challenge the reader when it comes to the standard definition of romance?

LP: I think I'm supposed to answer "yes" to this, but in all honesty, I hope not. Don't get me wrong: I intend to write whatever erotic scenarios I feel are compelling and sensual, regardless of whether or not they're considered "controversial." But fundamentally, the story has to be about the people. It has to center on their unique relationship. To me, nothing is as sexy or romantic as the feeling that two specific individuals have found something together they'd never have had on their own. The intensity of their need to be together has to be as emotional as it is physical. Sometimes that may involve a more extreme sexual scenario, but sometimes it won't. If I ever catch myself writing a book where I'm trying harder to work in a specific kink or taboo than I am to delve into the characters, I'll know I'm getting it wrong.

Lilah's books can be purchased at all major retailers and you can find out more about her work at lilahpace.com