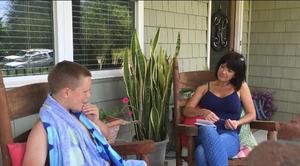 Three years ago, my brother Will died from a prescription drug overdose. Six weeks later, I ended up in rehab for alcoholism. At the time, my oldest nephew, Gavin (the son of my older brother and not Will), was 8 years old. After spending 28 days in rehab and learning a little about the disease of addiction, I sat down with him when I got back to explain where I had been for the past month. He was old enough to have questions about how his Uncle Will had died and why I went away and, as a family, we had decided that we would be open and honest about Will's death with everyone.

I had come to the conclusion that I would do the same when it came to my struggles and recent recovery. When my mom called me about halfway through my rehab stay and said people were starting to ask where I was, I told her without hesitation to let anyone who asked know that I was in rehab. I was so tired of lying; I didn't care who knew. Everyone knew I had a problem. And in some way, I thought it was the right thing to do by my brother. I had been such a hypocrite, telling everyone that offered me condolences that I only wished Will hadn't been too ashamed to ask for help, but there I was too ashamed of my own addiction to ask for help. Will's death expedited my entrance to rehab. I am not sure when or even if I would have ever gotten sober if he hadn't died, so I felt I owed it to him to be honest with everyone and show them I was no different than him.

Gavin is now 11 years old. I haven't formally sat down with him since I got back from rehab but I let him know then that he could always come to me and ask me anything and I would be honest with him about whatever he wanted to know. Luckily, my older brother and his wife share the same open and honest policy and they use any opportunity to educate and bring awareness to Gavin and his two younger brothers when it comes to alcohol, drugs or addiction.

I recently sat down with Gavin to ask him a few questions and what turned out to be a seemingly simple conversation about a not-so-simple subject with an 11-year-old blew me away.

Allison: What does it mean if someone is an alcoholic?

Gavin: When they drink, they have a problem. Like some people can drink one and stop but I guess alcoholics just keep drinking -- like they can't stop. They keep drinking. If they drink one then they have to drink 10. You... basically you drink until you pass out.

Allison: Who do you think needs to go to rehab?

Gavin: Probably alcoholics and drug addicts because they need help. They need help before it gets to the point of, like, Will.

Allison: What do you think the difference between me and your dad (who's not an alcoholic) is when it comes to drinking?

Gavin: Like what I said... he can drink one and stop but you and alcoholics... if you drink one, then you have to keep drinking.

Allison: Why do you think people drink?

Allison: What do you think an alcoholic looks like? Do you think they look a certain way?

Gavin: No. They can be anybody. You don't look abnormal -- you're normal (pointing to me). Anybody can be one. It's not the way you look.

Allison: What do you think it means to "drink responsibly"?

Allison: Can you tell a difference in me from when I used to drink compared to now?

Gavin: Yeah. You are happier, I think. And you spend more time with us. Like, you used to not come around as much but you do a lot now.

Allison: When you are 21 and can drink a beer legally, what do you want your relationship with alcohol to be like?

Gavin: I don't want to have one because I know that it's in my genes to be an alcoholic so I mean, really, honestly, I know it's okay to drink responsibly but I honestly don't even want to drink because the fact there are two [alcoholics in my family] and maybe more so I know it's a possibility.

Allison: What does it mean to be in recovery?

Gavin: You are trying to get off your bad habits. Like, when you get hurt and you are recovering, you are getting better and when you are an alcoholic or drug addict then you are going to recovery places like rehab to get better and get off drugs and alcohol.

Allison: Do you have friends with parents who drink too much?

Allison: Do they talk about it?

Gavin: No. The kids are embarrassed.

Allison: Why do you think people don't ask for help who need it?

Allison: Why do you think I got sober?

Gavin: Because of Will, I think. You saw what could happen and I think you figured out it was more powerful than you thought at that point. I don't know if you were scared or whatever, but...

Allison: Do you think it's just bad people who are alcoholics and addicts?

Allison: What would you tell someone who needs to help another person who drinks too much?

Gavin: I'd probably tell them the story about my uncle and my aunt. Not to scare them but what it has the power to do.