Locke may just be one of the best films of 2014. Superbly written and directed by Steven Knight and featuring a dazzling performance by Tom Hardy, Locke is a must-see for anyone who believes that human character is still the most compelling subject of the cinema. I saw Locke earlier this year when it played to rave reviews at Sundance, and spoke with Knight about his innovative and deeply personal film which is expanding this week to theaters nationwide.

In the film, Tom Hardy plays construction engineer Ivan Locke, a man who takes as much pride in the firm foundations of his buildings as he does in his unshakeable code of personal responsibility. One night, Locke leaves a construction job to drive from Birmingham to London to fulfill a mysterious promise. Along the way, he makes and receives a series of wrenching phone calls that bring his sense of personal duty into conflict with everyone and everything he loves.

I'm a big fan of films that use new digital tools to experiment with the traditional structure of the movies. Beautifully shot and crafted, Locke succeeds at being both formally inventive and emotionally gripping. The entire movie, with the brief exception of the opening and closing shots, takes place in the interior of a car and features only one actor on-screen, Tom Hardy. At the Sundance premiere of Locke, director Steven Knight told me that he and his talented team used Red digital cameras to shoot the film continuously from beginning to end each night, like a stage play.

Stripped down to the bare essentials as a result, Locke focuses on what matters most: character, emotion, and story. The film proves that even in the contemporary cinema, with its obsession with surface visual effects, movies can still delve below the surface and capture something essential about human nature in much the same way literature can.

In Locke this is largely done through the power of the close-up. In the best movies, the close-up serves to bring emotional transparency to a film, whereby the candor of an actor and the attentiveness of a director work together to draw out the inner life of a character onto the big screen. And it's there on the big screen that the human face takes on mythic qualities, elevating specific human experiences into universal truths. On the big screen there's no place to hide as an actor -- but if one is as talented as Tom Hardy, one doesn't need to. Hardy sensitively pulls off Ivan Locke's volatile and heartbreaking mixture of machismo, passion, humor, anger, and doubt -- depicting Locke like a bear trapped in a cage of his own making. 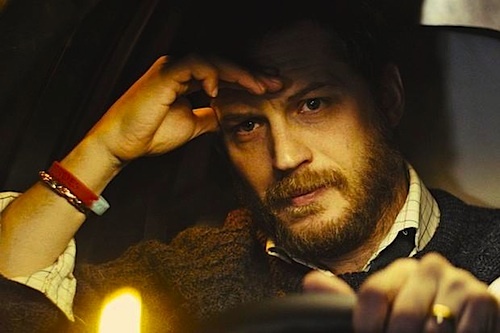 I spoke with Steven Knight (Academy Award-nominated screenwriter for Dirty Pretty Things) at the Sundance premiere of Locke and asked him how he pulled off such a technically complicated and emotionally wrenching film. The interview has been edited for length.

I'd like to ask you about the innovative way you made the film. Why did you choose to do such a tight character study and film it in these continuous takes? Tell me about your process.

I just finished making a film with Jason Statham the conventional way [2013's Redemption]. And two things occurred. One was: anything we shot from the car at night was beautiful, and I thought the thing to do would be to make an installation of that -- make it as a piece of art with just the moving traffic patterns.

And then, I also asked the question of myself: the basic task here is to get a lot of people into a room, turn the lights off, and get them to look at a screen for 90 minutes. That's the basic job you're doing. [But] are there other ways of doing it? So I thought that maybe that beautiful frame of the moving road could be the theater. And ... it would need to be one man, and if you're going to get one man, it better be Tom Hardy. So I approached him and I said I want you to do a play, effectively. I want to shoot it as a play, but in the environment of a car. He was really keen, read the script and the next weekend we were shooting it. The whole point all the way through was to shoot it in sequence so that it's an actor's performance. Don't split it up, don't turn it into a conventional way of shooting it. And I think the rewards are immense, because the actors feel like they are in control of their own performances.

Did you shoot it all in one take, or did you break it up into segments?

We shot the whole film every night, sometimes twice, so we sometimes had two versions of the movie in a night. Then when the process was finished, we got all the different takes and then edited together what we thought was the best.

What's the longest, uninterrupted take in the film?

And how did you prepare with Tom Hardy? Was there a very long rehearsal period? Did you rehearse it like a stage play?

We got Tom and the rest of the cast together -- an amazing cast of people who agreed to take part because they were invested in the project, they liked it -- and we sat around a table for five days and we read through it as you would a play. I gave my directions during those five days, so that when we shot it, I wouldn't need to do that. So everybody had their say and everybody talked about what their character was, and then we went on.

I find it very interesting that there's been this trend recently of having these long, continuous takes in films. We had a trend for a while with digital editing creating shorter shots, fragmenting our experience of the movies -- now people seem to want to counteract this. Alfonso Cuarón with Gravity had very long shots, now you have very long shots, was this something that was a conscious thought in your mind?

It's not so much that... it appears to me in a lot of film [today] the imagination is done for the audience. All the special effects and explosions and all of that stuff is basically the filmmaker saying to the audience "do nothing, just watch." Whereas with something like this we're saying "90% of the characters you don't see" [on screen] and yet, one of the great comments Locke's been getting is that people forget they haven't seen the other characters. They think they know what they've been looking at, because they're doing the special effects for themselves [in their own minds]. We were sort of going back to basics with the theater, but the digital element, in a way, helps us to do this because the beauty of the digital shot in the night-time gives us the theater [space], and then the play can take place in it.

So the digital shooting allowed you to catch a lot more detail at night because with film you wouldn't be able to do that.

To stay in the moment.

What camera did you shoot on?

What do you think about movies like Russian Ark or similar films that have had very long continuous takes?

I'm not a great film-goer, and I never have been.

It's sort of deliberate. I often find in the film world, that it's very self-referring. If you talk to someone about films, they talk about them in terms of other films - rather than as something that happened to them in their life. And I'm really keen to get back to film as a reference to real things, not necessarily to other films. So I actually didn't know that those films were doing long takes, but no matter what you do people say -- "oh, that's like ..." (laughs). I'll have to think of a concept so weird that nobody ... But yeah, I didn't feel that it was part of a trend, but then probably no one ever does because trends happen for a reason -- for reasons of society.

That's true. So, you want to capture direct experience?

Another criticism of the digital age is that because we have so many movies available to us now, and so much more media that we're saturated with (SK: "Yeah.") than people in the Golden Age of cinema, that our films now are very self-referential, copies of copies of copies.

A funny thing about film is that it's the only medium where people say there are really rules that you have to stick to. Nobody says to the writer -- in a film you've got to have three acts -- there's a character arc you have to do -- there's no reason that's true. That's not true in life. Life doesn't have three acts -- you know what I mean? You just go back to what's really out there. It's much more interesting than the template of what a film should be ...

So, is there a beginning, middle, and end to this film nonetheless?

It's literally a journey. You get into the beginning, middle, and end of the journey, that's taken care of by the structure of the nature of the thing.

So it's like a stream of consciousness, lived experience kind of story. The great editor Walter Murch always asks "why does editing work?" and he says it's because of the blinking of an eye (SK: "Yeah yeah, I've heard of that."). Reality is a continuous stream, but it is interrupted by the blink of an eye, and that's the experience of reality.

Yeah, it's like: the whole technical reason for not crossing the line, you know. No one knows what that rule is, but if you break that rule... [people notice it], so it's really fascinating. I love it when there's a thing that you can't actually disobey [in film]. There's that one thing that you can't disobey, which is that one principle.

Very true. Any final thoughts on the film and how you enjoyed making it?

I've really enjoyed the response because everywhere we've shown it, absolutely without exception, when the lights go on, the most enlightened people have tears in their eyes. People are very much finding something in their own lives that relates to this. I had a great comment from someone who said, "that's the journey my Dad never made, and I'd never asked him about that." This is something they deeply feel that resonates with them, which I'm really pleased by.