Yesterday morning, I told Roozle about the marathon bombing. Here in Boston, it isn't so much about should we? it's a whole lot more of when and how. This time, it's too close. This is our home. Roozle was just in that neighborhood on an adventure to visit Make Way For Ducklings a few weeks ago. MCB is there almost daily for work. Everyone is talking about it. She had to know. She had to find out from us. Thankfully, the kids in Boston have this week off. We had time. So I waited. I waited until I stopped feeling nauseous. I waited until my eyes stopped burning. I waited until my voice stopped cracking. I waited. And I told her.

My plan was to start with what she knows. She knows nothing about what happened as she's had no exposure to the media and we've been quiet around her. She doesn't know what a bomb is. She still doesn't even know what a gun is. But here, people are talking. Bags are being searched. There are police and ATF and SWAT teams everywhere. I tried to think about what other preschoolers might say about it. That they would likely use the term bad guys, so I should too. I needed to meet her where she was at and make it as simple as possible.

She interrupted. She asked me to see a picture of it.

I tried to tell her no, that it was big and I didn't want it to scare her, but she insisted. So I hid my phone and quickly found a photo that was appropriate, if there is such a thing. Together, we looked at the photo. We talked about the police officers and all the people you can see running towards the explosion. How they were all running to go help the people who were hurt.

I told her that a bad guy made the explosion happen and that it can make us feel scared that sometimes people can make such bad decisions to hurt so many people. We talked about how it's okay to be scared and to talk about feeling scared when something happens that we don't like. We also talked about how there are these bad guys, but how there are always so many more people who are there for helping.

She listened and went back to the LEGO house she was building. When she finished the house, she put her big hat over the house. She said that it would protect the house from the bad guy. A few moments later, she announced that the bad guys got into the hat! They were going to hurt the people! Let's call the workers to come help! We both smiled as we pretended that a long line of workers came to help. Teachers, doctors, parents, and police officers.

Here in Boston, if you're looking for the helpers, they're easy to find. Around here, the helpers are everywhere. And that, though this is impossibly hard, does make it all a bit easier. 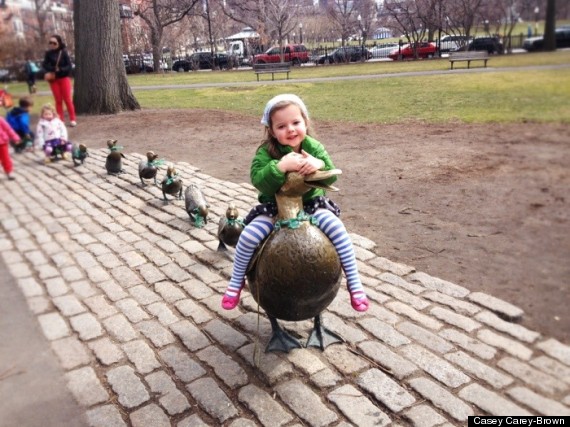 This piece originally appeared on Life With Roozle.

Read more responses from parents about how they're talking to kids about the bombings here.

More:
boston bombingsparents-toddlersParentsBoston Marathon Bombingspreschoolers
Newsletter Sign Up
Raise the kind of person you'd like to know
Subscribe to our parenting newsletter.
Successfully Subscribed!
Realness delivered to your inbox