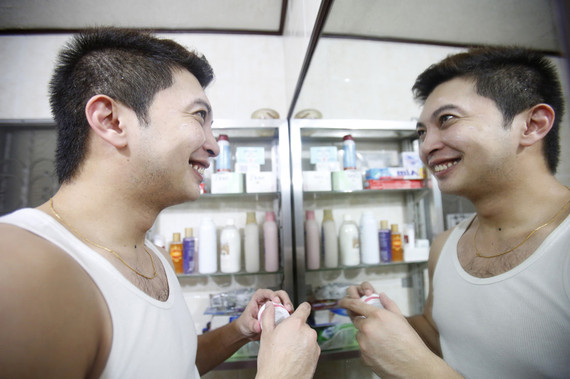 A growing number of young Asian men are using a plethora of whitening products. Cheryl Ravelo/Reuters

Jose, 19, is a college student in Puerto Princesa City, Philippines.

On a regular school day, after he wakes up, he takes a shower, scrubbing his body using soap made of papaya (Carica papaya), a fruit that's said to have skin-whitening properties. Afterwards, he applies a facial whitening lotion, and before finally going to school he uses SPF 30 sunscreen, again with whitening properties, on his face and arms.

Jose was one of many young people I met in my ethnographic work as part of the Chemical Youth Project, a research programme that sought to document and make sense of the different chemicals that young people use in their everyday lives, from cosmetics to cigarettes.

Skin whitening among women has long been commonplace in the Philippines and other parts of Asia and the world but, while working on this project, I was struck by the fact that young men too, are using a plethora of whitening products. And that these products have proliferated in various retail outlets, from shopping malls to small sari-sari, or neighbourhood, stores.

But this development is not unique to the Philippines either. A 2015 study found that the prevalence of skin-whitening product use among male university students in 26 low and middle-income countries was 16.7%. The figure was higher in many Asian countries: 17.4% in India, 25.4% in the Philippines, and 69.5% in Thailand.

In the Asia-Pacific region alone, the male cosmetics industry was estimated at $2.1 billion in 2016. Whiteners are likely to be a significant component of this figure; a 2010 study reported that 61% of all cosmetics in India had a whitening effect.

How do we make sense of this phenomenon? First, it must be pointed that the preference for white skin, even among men, has existed in many parts of Asia since ancient times.

In Heian Japan (794 to 1185 AD) and Ming China (1368-1644), handsome men were described as having white or pale skin. In one undated Philippine epic, the hero covers his face with a shield so that the sun's rays will not "lessen his handsome looks".

Researchers have suggested that, in many societies, fair skin was a mark of class distinction. In her 2012 book Living Color, American anthropologist Nina Jablonski explains:

Untanned skin was a symbol of the privileged class that was spared from outdoor labor ... Dark-skinned people were deprecated because they were of the labouring class that worked out in the sun.

Others have suggested that the association of whiteness with purity became conflated with the idea that white skin signifies spiritual and physical superiority.

Arguably, the colonial encounter lent another meaning to white skin, making it a marker of racial - not just class - distinction. Filipinos, for instance, were commonly referred to by the Americans as their "little brown brothers", signifying an unequal fraternity based on height and skin colour.

But some scholars have also pointed out that many Asian people don't necessarily aspire for a "Caucasian whiteness", but a "cosmopolitan whiteness" that transcends race and signifies mobility across national borders.

Like the emergence of the "metrosexual" (urban men who enjoy interests traditionally associated with women and homosexual men), the rise of male-specific whitening products may be explained by the demographic and social changes that have given rise to the view of the body as, in the words of UK sociologist Chris Shilling, "a project that should be worked at and accomplished as part of an individual's self-identity."

It can also be attributed to changing notions of masculinity that are no longer incompatible with the use of cosmetics or beauty products.

Promises with side effects

In South Korea, K-pop superstars promote homegrown brands such as The Face Shop and Etude House, and serve as ambassadors of a Korean male aesthetic: slim, youthful-looking, and fair-skinned.

While it is insightful to look at these historical and global trends, it's also important to look at the individual users themselves, and the role whitening products play in their lives.

In my fieldwork, I met many young men who were motivated by perceived social and economic gain: 20-year-old call centre agent Edwin wanted to be more attractive to girls.

Jose, for his part, wanted to someday be a flight attendant. He told me, "If you're fair-skinned, you're noticeable, and that gives you a advantage."

Their assumptions find empirical support in studies that suggest men with lighter skin are more likely to get higher paying jobs. In environments where young people only have their bodies as "capital", resorting to modification is understandable.

But from a public health perspective, the proliferation of whitening products raises questions of efficacy and safety, particularly in Asian countries without strong regulation.

For all their promised effects, there's actually no proof that many products actually work, and many of them have potentially grave side effects. Mercury, for instance, is a known toxin but it's still found in skin whitening products in India, even when it has long been banned in many other countries.

Alongside these health concerns, the moral debate continues. By shaping the way people people view their skin - and that of others - will its colour, which is determined by genes, occupation and lifestyle, become another layer of inequality?

And as with any other social issue, there has been dissent. Across Asia, a growing number of voices challenging the "colourism" they have to live with. Blogger Aswasthi Thomas, for instance, recently declared:

But what these campaigns sometimes forget is that the quest for distinction through physical appearance is probably as old as humanity itself. And it's unlikely to go away, especially when it is useful for people in their everyday lives.

Even so, as desires for dermatological perfection become increasingly commodified - and as skin becomes subjected to a host of chemicals - the point about restraint and reflection is well taken.

Indeed, as more and more men and women embrace the idea that "fair is handsome", we need a deeper conversation about the motivations that underwrite the phenomenon of skin whitening, and the meaning of (un)fair skin.