Much of the conversation around having a family and a career is simply whether or not to try and juggle both. You’re in or you’re out -- and likely struggling with your choice either way.

But for many moms who return to work, the process isn’t simple, and you can't necessarily jump back into your career right where you left it. It’s complicated for all involved: your spouse, your children and your career. Nowhere has that process been chronicled as it has been in Montreal filmmaker Tally Abecassis’ podcast, "First Day Back," through which she tracks her journey back to work after what she terms “the longest maternity leave ever.”

“I couldn’t figure out how to balance being a new mom and leaving the kids all day to get back into my career. My head was not there,” she says in the first episode. Abecassis, a documentarian by trade, stopped working after the birth of her first child to stay at home. She had reached a point of feeling like she wanted to reclaim an identity beyond being someone’s mom.

"First Day Back" is a serialized podcast, meaning the episodes are meant to be listened in order. When the podcast starts, Abecassis has been out of the workforce for six years and is now a mom of two who is feeling ready to jump back into her creative career. “My career is feeling too far away, and I’m losing track of that other part of myself,” she says in the first episode. “I’ve read all the mom blogs, and the mom books. And they make me feel less alone, but they don’t make it easier to know what to do, and how to do it."

The series of episodes serves as part audio diary, part interview series. Listeners follow along as Abecassis anxiously refreshes her email for a grant notice. We understand her disappointment at learning the film-funding game is harder today than when she left. We smile at hearing from her young sons, who introduce themselves on the series as, naturally, robots. 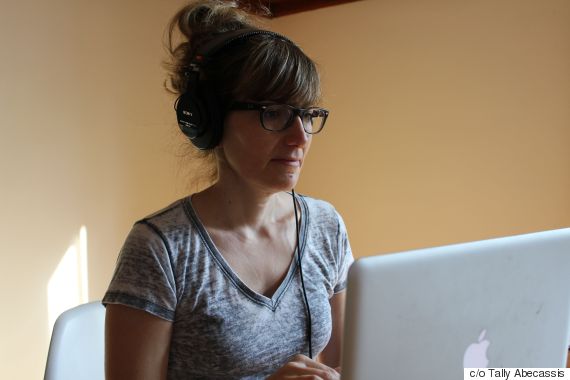 It’s a common narrative in media to question whether parents, women especially, can “have it all”: a thriving career, strong bonds with their kids, a spotless home. Abecassis’ podcast puts a zoom-in lens on this issue, her confessional storytelling taking the work/life balance question out of think pieces and into a real-life setting. “It’s been a bit of a wake-up call to feel like 'oh, no, something’s got to give,'” she said in an interview with The Huffington Post. “Part of the ‘having it all’ equation for me was that I would have kids and be unchanged… I don’t feel like the same person. I hadn’t really banked on that.”

“I don’t know: do I want to work the crazy hours? If my filmmaker career was going crazy well, I wouldn’t be around to be with my kids. Then would I have it all?” Abecassis continued in the interview.

While the nature of having a career that’s both creative and freelance poses its own unique problems, the doubts that accompany any mom’s return to the workforce are universal. “The more people I talk to, the more people seem to relate in all kinds of fields. People relate with the sense of feeling divided inside,” she told HuffPost.

“I just started to think about it and I was feeling very conflicted about where I was in life. And I thought, well, that’s kind of a story,” Abecassis said to us. “Then the film project started.” Abecassis ultimately found the project that would put her back in the workforce -- and the podcast’s narrative arc -- in the Falla, a project in Montreal in which students spend weeks creating an elaborate sculpture, only to burn it down later on. And while the specifics of this film project -- something non-filmmakers rarely have behind-the-scenes access to -- are compelling, the real emotional weight of the podcast comes in Abecassis’ concerns around her identity and family. And putting this out for public consumption has shown her just how widespread certain aspects of her journey are. 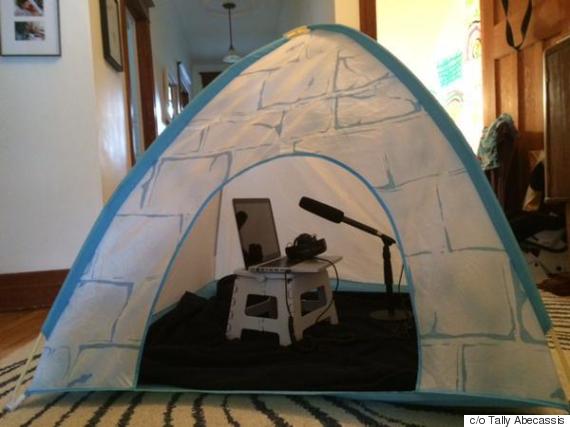 “It’s so validating for me when people tell me, ‘I related to what you’re saying,’ especially if they’re in a different field,” she said in our interview, recalling a friend that had recently introduced her to someone who was a fan. “You could jump right into a really meaningful conversation,” Abecassis said. “She had taken time off and she was figuring out how to get back in, and she’s a powerhouse business person.” Everyone has trouble with their first days back, whether their professional weapon of choice is a camera or a BlackBerry. “I felt like it just connects me… I’m not crazy. It’s not just me.” It’s a feeling many parents experience, notably in the isolation of early parenthood. Podcasts like that of Abecassis can be a lifeline, a quiet voice during middle-of-the-night breastfeeding or in the car after dropping your kid off for her first day of daycare that you’re not the only one to go through this.

Jumping back into work has led to some surprises, too. For one, her older son is interested in her job. “To me, that’s been huge… I didn’t think they were going to care at all,” she told HuffPost. While this change in her kids’ attitude may be because of Abecassis’ interesting career, she doesn’t think the revelation is for her alone. “Just the idea that kids can see you differently is important," she said. “For so many adults, when you speak to them, it doesn’t matter what their moms did. They often say, ‘I’m really proud of my mom because I saw how hard she worked.’”

Listen to Abecassis’ podcast, First Day Back, on iTunes or via the podcast website.


1
On Being
iTunes
In her podcast On Being, Krista Tippett explores life's most meaningful questions through interviews with a variety of scientists, theologians, artists and teachers. Posted every Thursday, these hour-long segments are bound to teach you something new about your existence as an individual in this world.
2
Strangers
iTunes
Described as an "empathy shot in the arm," Strangers is a weekly podcast that shares the true stories of people we meet, how we connect with them, what it's like to lose them, and the power of kindness. In listening to host Lea Thau, you just might begin to question the person you really are as well -- no matter how disquieting that might be.
3
TED Radio Hour by NPR
iTunes
From the adored video speaker series TED Talks comes TED Radio Hour, a podcast that inspires us to think and create in new ways. Based off of the show's best speakers and hosted by Guy Raz, the podcast gives listeners an hour each week to think about the progress of the past and fresh ways to address problems and ideas in the future.
4
Benjamen Walker's Theory of Everything
iTunes
With a balanced blend of humor and seriousness, Benjamen Walker's Theory of Everything podcast challenges you to really think about what's going on in the world and the role you ultimately play in it. His narrative journey works through the topics of art, culture, media and technology, connecting all the dots in between along the way.
5
Bulletproof Radio
iTunes
Tech entrepreneur Dave Asprey is the man behind Bulletproof Radio, a podcast all about streamlining your life and becoming the best version of yourself physically, mentally and emotionally. Each week he brings you the knowledge of doctors, biochemists, nutritionists and meditation experts to help you find this "bulletproof" state within yourself.
6
Stuff To Blow Your Mind
iTunes
From the makers of popular podcast How Stuff Works comes Stuff To Blow Your Mind, a conversational show about the sciences designed for those who don't necessarily have expertise in those areas but are curious to learn more. Co-hosts Robert and Julie answer some of the most curious questions each week, like "How does greed work?" and "Can money buy happiness?"
7
Mindset Zone
iTunes
The Mindset Zone is all about leaving fixed views of the world behind and cultivating what host Ana Melikian, PhD calls a "growth mindset" in their place. Her weekly podcast challenges listeners to stretch their minds, explore the realm of possibilities in their behavior, and consider who they are as individuals.
8
Here Be Monsters
iTunes
Here Be Monsters is a narrative podcast sharing the real-life stories of artists, scientists, philosopher and journalists with a unique, cerebral twist. Through each episode, which is substantially different than the next, narrator Jeff Entman exposes listeners to how life is full of opportunities and why we shouldn't place limitations on ourselves.
9
The Daily Boost
iTunes
For those who need a little extra motivation, self-help podcast The Daily Boost delivers just what it promises. Host Scott Smith sets out with each show to help you find what makes you happy, reduce your overall stress, find new inspiration and develop skills that help you balance your life.
10
The Partially Examined Life
iTunes
For the deep thinkers without a philosophy degree, there's The Partially Examined Life, a philosophy podcast that explores a new question or concept each week and encourages amateurs to jump right in. Balancing insight with levity, the narrators pick a short text and chat about it in a way that everyone can follow as well as enjoy.
11
All Together from HuffPost Religion
iTunes
Hosted by HuffPost Religion's Executive Editor Rev. Paul Brandeis Raushenbush, All Together is a podcast that explores the roles religious ideas and spiritual beliefs play in shaping our personal lives, our communities and our world. Each half-hour session tackles a current issue in the religious world that will leave you with quite a few new things to think about after listening in.
12
Meditation Oasis
iTunes
Meditation can be one of the best ways to cultivate a sense of mindfulness, and Meditation Oasis is a great place to begin if you want to give it a try in podcast form. Co-hosts Mary and Richard Maddux help listeners relax, be more present and find their flow within life through guided meditations with or without music, as well as instructions for practicing meditation solo.
13
The Greater Good Podcast
iTunes
From UC Berkeley's Greater Good Science Center comes The Greater Good Podcast, an audio show all about the science of a meaningful life. Hosted by Michael Bergeisen, the half-hour podcasts share interviews with top researchers and thinkers discussing the roots of compassion, happiness and morality.
14
A Quiet Mind
iTunes
A Quiet Mind is designed for those looking for an inner sense of happiness, peace and wholeness. Host Robert Jackson shares lessons that are relaxing to listen to and carry wisdom for the ages for anyone hoping to improve the quality of their own life.
15
Invisibilia by NPR
iTunes
This new addition from NPR is one to look for on the mindfulness front. Latin for "all the invisible things," Invisibilia addresses the invisible forces in life that affect human behavior through narrative storytelling and scientific research. Co-hosted by Lulu Miller and Alex Spiegel, the podcast launched Dec. 18 with its 4-minute preview, and posts will be 60 minutes long in the future.
More:
Working MomsParentsvoicesworking parentsfirst day back