When Israeli photographer and mom Tamar Shugert saw 52Frames' "Make A Statement" photo challenge, she knew exactly which topic she wanted to cover for her entry: respect for breastfeeding mothers.

The mom-of-two (and soon-to-be three) told The Huffington Post that although she's never experienced disrespect several friends of hers have been asked to relocate to the bathroom when breastfeeding in public places.

Shugert submitted a side-by-side photo collage -- in one photo, she pretends to breastfeed in her bathroom, and in the other, her husband poses eating spaghetti in the same bathroom. The caption reads in part, "If you are not willing to eat your lunch in the bathroom, then don't expect me to feed my kid there!" 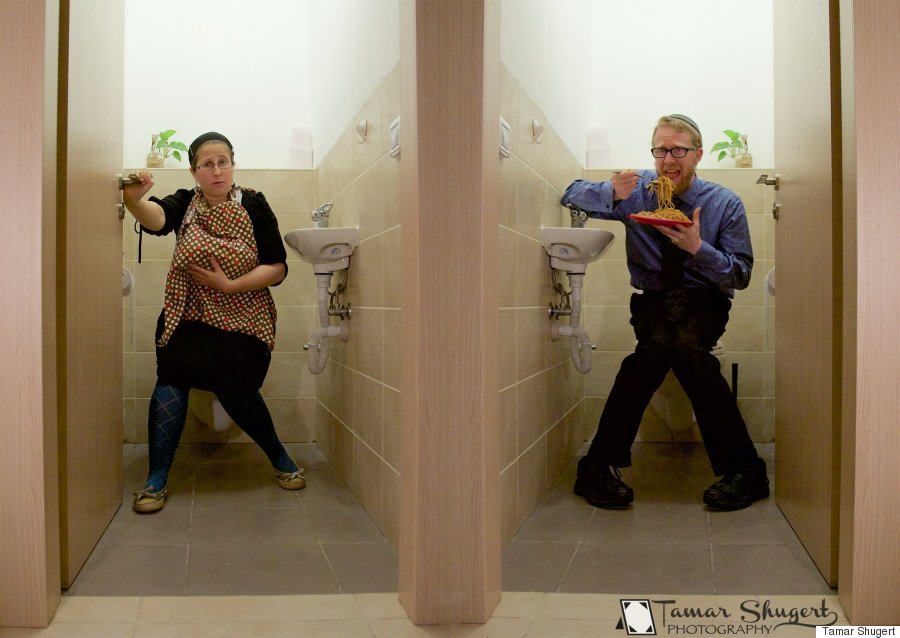 Because Israel is a fairly religious country, Shugert explained that many women do not nurse their babies uncovered outside the home. But, she added that opinions on the matter range considerably from the more modern, secular Tel Aviv to the more traditional areas of the country.

Shugert's photo, which ultimately won the Audience Award, has over 1,000 likes and shares on the 52Frames Facebook page. The mom told The Huffington Post that she's proud to have received so much positive feedback for a cause she strongly supports, but was disappointed to see some commenters criticize the fact that she wears a cover in the photo. The photographer explained that, "coming from a religious community where modesty is important," she does not feel comfortable breastfeeding in public without a cover and stands by her personal choice. But, she added, "everyone has their opinion."

Still, the mom hopes viewers can agree with the photo's main message. "Women should not be asked to go feed their children in bathrooms," she said, adding. "Nobody wants to be eating in bathroom. I wouldn't breastfeed in a bathroom even if I was asked to."