In the disability community, it is well-known that calling a person with a disability an inspiration simply based on their appearance is condescending and offensive. However, it should be recognized that some individuals with disabilities are inspirational -- not simply because they live life with a disability, but because they have overcome such obstacles and used their situations to educate and motivate. Tamara Mena is one of these amazing individuals. At the age of 19, Tamara was in a car accident that killed her boyfriend and left her with a spinal cord injury. Her injuries also included collapsed lungs, which temporarily took away her voice. In a recent conversation, I asked Tamara how she motivated herself to acclimate to life after her injury, how she deals with the assumptions often assigned to her appearance as a woman in a wheelchair, and about her work as both an activist and a model. 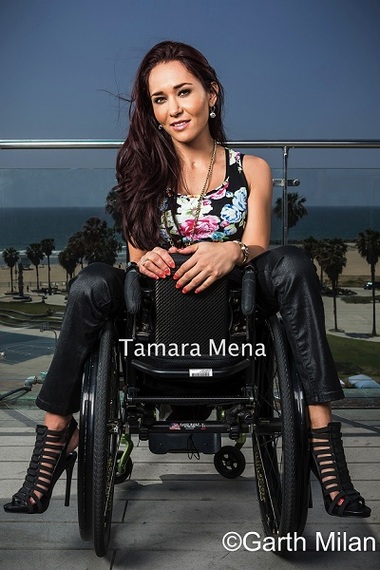 On stereotypes and assumptions: When I asked Tamara about the most challenging parts of interacting with others who did not understand her wheelchair use, she cited the limitations that others put upon her. "People don't think you can do a lot of things when you're in a wheelchair," she stated, and went on to describe how others immediately assume that she is less independent than people who don't use wheelchairs. Even seemingly flattering statements like "you're too pretty to be in a wheelchair" operate under the assumption that wheelchair users are somehow "less" than others. Tamara is often offended by this statement because "spinal cord injuries do not discriminate." Tamara takes every opportunity to engage in dialogue about wheelchair users to educate others on how to interact with them. She is also a cofounder of the Limit-Less Campaign, which seeks to educate the media and the public at large to eliminate the phrase "confined/bound to a wheelchair" from their vocabulary, as it reinforces stereotypes. "I like to create a warm environment and make people feel comfortable. When a child asks why I'm in a wheelchair, I use it as an opportunity to educate in a kind way." Her greatest piece of advice? "Don't just assume that a wheelchair user needs help."

On the challenges of her recovery: Tamara has been extremely successful as a motivational speaker and model, but the path to her success was riddled with challenges. Her approach to overcoming these challenges was a sense of positivity and inner strength. "I thought maybe one day it would hit me that I couldn't walk and that I'd be majorly depressed, but I was just never shocked by that. Things only got better with time." Her support network was a vital part of motivating her, especially Dr. Suzy Kim, who is a wheelchair user herself, and her mother, who supports her unconditionally. When she got home, she faced the challenge of getting back on track with her schoolwork. "I was usually ahead of the game in school, but now I had a two-year setback. It was frustrating seeing my friends graduate. I just had to constantly remind myself that I would get there, that I was not going to give up, and that I was not going to let the wheelchair stop me from pursuing my dreams." Despite ending up in the ICU twice due to infections that traveled to her blood, she graduated summa cum laude and served as the commencement speaker for her graduating class. Additionally, out of all graduates she was selected to receive California State University Stanislaus's most prestigious award, the J. Burton Vasche Award. "It was an amazing day. I was the first commencement speaker in a wheelchair and spoke in front of ten thousand people, my largest crowd until this day. I was prouder to get my degree in my chair, and that I didn't 'walk' the stage. It was a mark of what I went through to graduate and it meant more. I wouldn't change it."

On her work as a model: Prior to her accident, Tamara was set on becoming a fitness model. Her paralysis changed the course of her modeling: "I was in my best shape before the accident, especially my legs and abs. And ironically that's what I lost after the injury as a T-3 paraplegic. That was hard." However, she remained positive, accepted it and went further to embrace her new self, her new body and image, and the wheelchair. She even went back to modeling, now in her wheelchair. "I don't like to be referred as a 'disabled model' because I feel that discredits me as a model. Yes, I have a 'disability,' but don't disable me." While she has noticed some continued negativity towards diversity in the industry, Tamara notes that there is certainly progress as well, citing a fashion show, Modelle Rotelle by Vertical Fondazione in Rome, in which she participated that contained both standing and sitting models. "It wasn't just a 'disability' fashion show. It showed diversity and high fashion with the statement that fashion is for all."

However, her biggest moment came this past year when she modeled in Mercedes Benz Fashion Week for FTL Moda Loving You and Vertical Fondazione. It was the first time MBFW has seen an integrative runway with models with different abilities, including wheelchair users, amputees and models with various mobility devices. Of the nine wheelchair models, Tamara was the only model from the U.S. and the only Latina. She reflected on the progress that has been made, saying that "modeling isn't superficial to me. It's a vehicle to break barriers which is what I always want to do." She also said she took a moment backstage to think about the times she had been rejected and was thankful and proud she did not let other people's negativity or insecurities limit her or stop her from pursuing her dreams as a model. Tamara plans to continue to break these barriers by entering the entertainment industry, continuing to challenge others to dispel the stereotypes of wheelchair users. "We aren't oppressed or 'confined to a wheelchair ' It's good for people to see us simply as we are and just as competent as others." 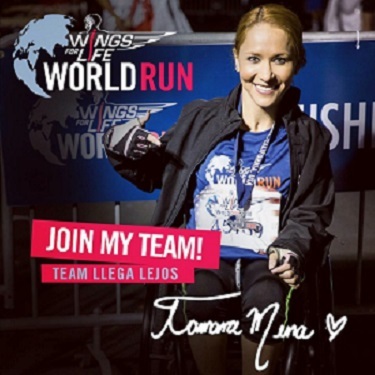 On her activism: Because activism is so vital to spreading awareness of sensitivity toward wheelchair users and knowledge of spinal cord injuries, Tamara is proud of using her voice to speak up for her cause, and for a special reason: she lost her voice. "I know what it was like to be hooked to a ventilator, frustrated and confused about the accident. I couldn't communicate when communication was vital to trying to make sense of what had happened." After she regained her voice, she became determined to use it for good and in honor of her boyfriend Patrick, who did not survive the accident. Tamara likes to use her voice for things with a greater purpose and represents different organizations, such as Ekso Bionics, and causes including the Wings for Life World Run. All of the proceeds from the run benefit Wings for Life, a non-profit organization dedicated to finding a cure for spinal cord injuries.

Tamara became involved as an Ambassador for the Run due to her fluency in Spanish and background in communication. "I was grateful that something of such a large magnitude was being done for spinal cord injuries. People have to see and hear stories about people with spinal cord injuries for it to make sense. Nobody is exempt from disability. We have to do something as a society to find a cure." She feels honored to be one if the ambassadors and grateful she gets to use her voice to spread this message in both English and Spanish. She concluded, " I'm doing everything I can to help, so I invite everyone to help too by joining the WFLWR, an amazing event worldwide. I will be running, pushing my wheelchair in Santa Clarita, California, hoping to surpass my last year's goal (5K). It would be an honor if you run, roll, push, walk, whatever with me. Join me in running for those who can't, because with your help, I hope one day I will!"

The following is a video of Tamara's involvement as an Ambassador for the Wings for Life World Run.