Called the Tamu Massif, the enormous mound dwarfs the previous record holder, Hawaii's Mauna Loa, and is only 25 percent smaller than Olympus Mons on Mars, the biggest volcano in Earth's solar system, said William Sager, lead study author and a geologist at the University of Houston.

"We think this is a class of volcano that hasn't been recognized before," Sager said. "The slopes are very shallow. If you were standing on this thing, you would have a difficult time telling which way was downhill."

Tamu is 400 miles (650 kilometers) wide but only about 2.5 miles (4 km) tall. It erupted for a few million years during the early Cretaceous period, about 144 million years ago, and has been extinct since then, the researchers report. [50 Amazing Volcano Facts] 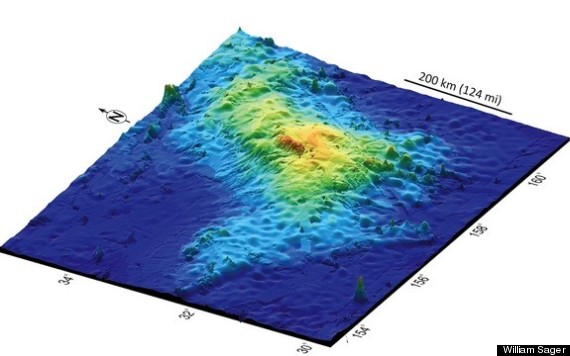 Like other massive volcanoes, Tamu Massif seems to have a central cone that spewed lava down its broad, gentle slopes. The evidence comes from seismic surveys and lava samples painstakingly collected over several years of surveys by research ships. The seismic waves show lava flows dipping away from the summit of the volcano. There appears to be a series of calderas at the summit, similar in shape to the elongated and merged craters atop Mauna Loa, Sager said.

Until now, geologists thought Tamu Massif was simply part of an oceanic plateau called Shatsky Rise in the northwest Pacific Ocean. Oceanic plateaus are massive piles of lava whose origins are still a matter of active scientific debate. Some researchers think plumes of magma from deep in the mantle punch through the crust, flooding the surface with lava. Others suggest pre-existing weaknesses in the crust, such as tectonic-plate boundaries, provide passageways for magma from the mantle, the layer beneath the crust. Shatsky Rise formed atop a triple junction, where three plates pulled apart. 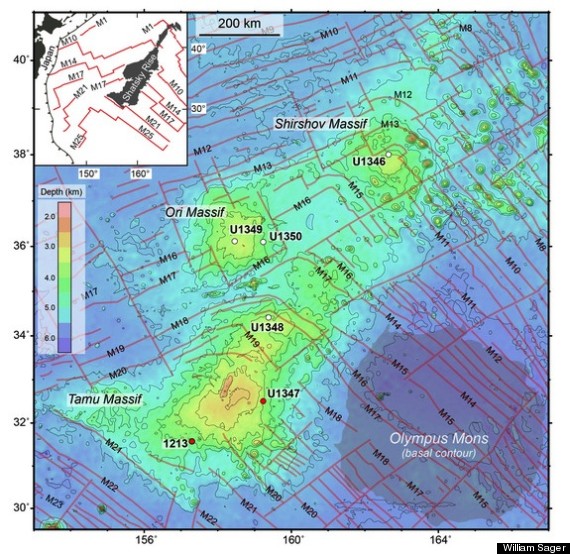 Tamu Massif on Shatsky Rise in the northwest Pacific Ocean, compared in size to Olympus Mons on Mars. (Click image for larger version.)

Tamu Massif's new status as a single volcano could help constrain models of how oceanic plateaus form, Sager said. "For anyone who wants to explain oceanic plateaus, we have new constraints," he told LiveScience. "They have to be able to explain this volcano forming in one spot and deliver this kind of magma supply in a short time."

Geochemist David Peate of the University of Iowa, who was not involved in the study, said he looks forward to new models explaining the pulses of magma that built Shatsky Rise. Tamu Massif is the biggest and oldest volcano, and the cones grow smaller and younger to the northeast of Tamu. Sager and his colleagues suggest that pulses of magma created the volcanic trail.

"It seems that in many oceanic plateaus the melting is continuous, but here you have a big shield volcano," Peate told LiveScience. "Understanding the source of the volume of that magma, the rate of production of the magma and the time interval between those pulses will help give better constraints to feed into those models," he said.

Sager said other, bigger volcanoes could be awaiting discovery at other oceanic plateaus, such as Ontong Java Plateau, located north of the Solomon Islands in the southwest Pacific Ocean. "Structures that are under the ocean are really hard to study," he said.

Oceanic plateaus are the biggest piles of lava on Earth. The outpourings have been linked to mass extinctions and climate change. The volume of Tamu Massif alone is about 600,000 cubic miles (2.5 million cubic km). The entire volcano is bigger than the British Isles or New Mexico.

Despite Tamu's huge size, the ship surveys showed little evidence the volcano's top ever poked above the sea. The world's biggest volcano has been hidden because it sits on thin oceanic crust (or lithosphere), which can't support its weight. Its top is about 6,500 feet (1,980 meters) below the ocean surface today.

"In the case of Shatsky Rise, it formed on virtually zero thickness lithosphere, so it's in isostatic balance," Sager said. "It's basically floating all the time, so the bulk of Tamu Massif is down in the mantle. The Hawaiian volcanoes erupted onto thick lithosphere, so it's like they have a raft to hold on to. They get up on top and push it down. And with Olympus Mons, it's like it formed on a two-by-four."

Sager and his colleagues have studied Shatsky Rise for decades, seeking to solve the puzzle of oceanic plateaus. About 20 years ago, they named Tamu Massif after Texas A&M University, Sager's former employer, he said.