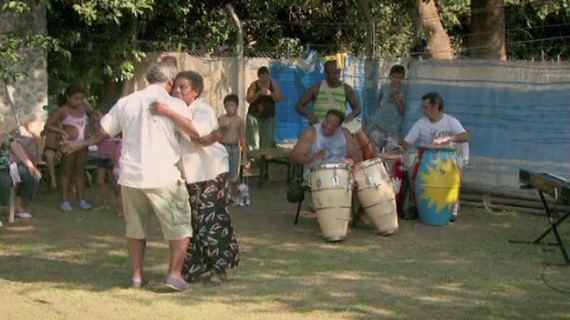 Ever wonder about the history of Tango?

It's not really the dance craze that defines our generation. We tend to think of it as one of those "exotic" dances that we may see featured on Dancing With The Stars. However, there is a real history to tango that can be linked back to the days of slavery.

The new documentary, Tango Negro: The African Roots of Tango, not only explores the African roots of this dance but also delves into the history of black people around La Plata River, which separates Argentina and Uruguay. What starts out as a simple discussion between two scholars turns into a history lesson about the connection between modern Tango and traditional African dance. This documentary also serves as a great resource that answers the question on many people's minds: what happened to all the African descendants in Argentina?

Tango Negro, directed by Dom Pedro, does such a great job of explaining the history of tango, which has a heavy sub-Saharan African influence and was born along The Rio Plata. This compilation of musical history becomes the most intriguing with the exploration of similarities among other forms of music like candombe, habenera, and milongo. While much of this doesn't sound exciting for those who are not music history buffs, the pure historical context of the social life and cultural significance of black people in Buenos Aires is fascinating.

The contextual information highlighting the slave trade, as well as the white washing of this musical form, makes Tango Negro very relevant in modern times. The idea of a musical genre being appropriated by another group of people isn't a new thing but back in 19th century, European approval give tango a legitimacy that lasts to this day.

Tango Negro is a foreign film with subtitles but do not let that fool you. I found myself engrossed in every word said, every song played, and every fact stated. This is a must-see documentary for those searching for information about the history of Afro-Latinos in Latin America.

Tango Negro: The African Roots of Tango is playing in New York City at Mist in Harlem from August 14th-20th. It also has a theatrical run in Chicago on 8/14 and will screen in Washington D.C. on 8/23.