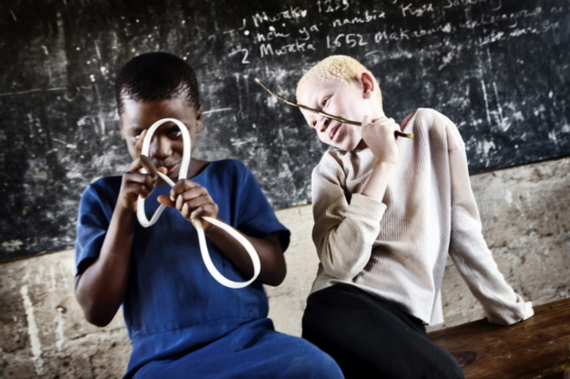 There is no doubt that educational access worldwide has improved in the past two decades. This has been driven by the launch in 1990 of the United Nations' Education for All global initiative. By 2011 there were more than 136 million children enrolled in schools compared with just 82 million in 1999.

The picture is far less rosy in sub-Saharan Africa. The region is home to half of the world's children who ought to be in school but are not enrolled.

This is not for lack of hard work and political will. Take Tanzania, for instance. Immediately after its independence from Britain in 1961, the country declared total war against three enemies of development: ignorance, disease and poverty. It introduced a Universal Primary Education program which managed, to some extent, to address several educational challenges. The program made schools far more accessible to and safer for most Tanzanian children.

Albinism is much more prevalent in sub-Saharan Africa than in other parts of the world. Estimates suggest that as many as one in 1400 people in Tanzania are affected. The prevalence is as high as one in 1000 in selected Zimbabwean and other southern African ethnic groups.

In fact, people with albinism merely suffer from a genetic pigmentation deficiency that means their hair, eyes and skin have little or no colour.

Data collected by the advocacy group Under the Same Sun shows that Tanzania is by far the most dangerous country to be an albino. It also warns that such attacks, mutilations, rapes and murders are likely to be under-reported.

It's not common for perpetrators to be arrested, tried and convicted. This might be attributed to the fact that even politicians are thought to be complicit in the murders of people with albinism. Some politicians have been accused of buying albino body parts as lucky charms to help them during elections.

This badly tarnishes Tanzania's image and contributes to the perception that the plight of people with albinism is not taken very seriously by the country's leaders. The country has made some attempts to curb the killings. In 2015 witch doctors, who are central to the trade of body parts, were banned. Sadly, the attacks continue.

In the past ten years a worrying new trend has emerged: children with albinism are often the victims of the brutal attacks described above. This is likely because children are more vulnerable and - since they are expected to be at school every day - easier to find in the same place and at the same time.

Many Tanzanian children walk long distances to and from school. They also play outside unsupervised and, being young and smaller than adults, will not always have the physical strength to resist attackers.

How can this scourge be tackled?

Poverty is at the core of attacks on people with albinism. Those who are battling to survive are often lured by syndicates which offer a lot of money for the body parts or entire body of a person with albinism. In some cases, people can earn as much as USD $75,000 on the black market for this grisly trade.

Tanzania's authorities will need to take a varied approach towards ending the plight of people and particularly children with albinism. Special attention will have to be paid to children who come from poor families and are more likely to leave school out of fear for their safety during long walks or time spent alone. It is important that they be given the support to stay in school and get the same education as their peers who do not have albinism.

In addition, local community leaders and religious leaders need to be involved in advocacy and education. Through these measures perhaps people will learn to live together peacefully, and Tanzanian children with albinism will no longer have to hide in their own homes.