It's strange that big and beautiful Lake Kivu, which sits on the border of Rwanda and the Democratic Republic of Congo, is largely unknown outside of Africa -- because it's a very special lake indeed. Positioned atop Africa's longest volcanic rift, its waters are supersaturated with potentially volatile gases that could one day explode violently and kill thousands. But what if there were a way to tap into the lake, extract the explosive gases, and burn them to create energy?

That's the idea behind a multi-million dollar project owned by the U.S.-based energy company ContourGlobal. This heady mix of geology, alternative energy, geopolitics, and social engineering gives us plenty to be hopeful about...and perhaps a few things to worry about as well.

The story begins deep underwater, where approximately two trillion cubic feet of dissolved biogas, mostly methane and carbon dioxide, exists at a depth of about 1,000 feet. Fifty years ago, a brewery was the first operation to tap into the gas to power its boilers. More recently, the Rwandan government has been looking for global partners such as ContourGlobal to help it produce burnable methane on a large scale. Local partner KivuWatt shares in the challenge.

Extracting the methane is a big deal because as the methane levels continue to rise in the lake, it could one day experience a so-called "limnic eruption," which happens when the pressure of the gases exceeds the water pressure holding them down, and kaboom! (Think of what happens when you shake a soda can.) Limnic explosions have happened twice in recent history on a small scale in Cameroon, but Lake Kivu is 1,054 square miles, and such an explosion could put two million people at risk from asphyxiation from a toxic gas cloud 300 feet high. 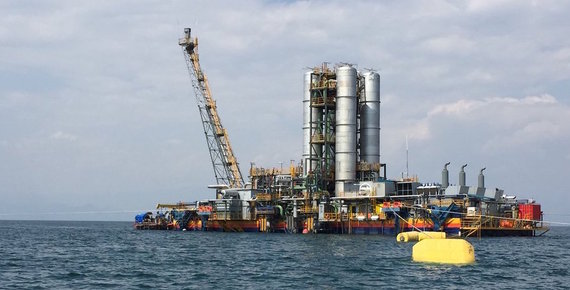 Then again, it can be tricky to mess with the fragile layers of fresh and saline water that create stable stratifications below the surface...for now. Start stirring the pot, and who knows what might happen?

Nevertheless, KivuWatt barges are under construction and destined to be anchored several miles offshore, where pipes will suck up water from 1,000 feet down. When the water comes up, the gases will separate out, and 80 percent of the methane and 40 percent of the carbon dioxide will be captured. The water will then be pumped back down, and the gases "washed" with additional water until the final result; a gas that's 85 percent methane and sent to shore for burning in a power plant. (Check out ContourGlobal's explanatory video.) The goal for stage one: 25 megawatts of generating capacity. The ultimate goal: 100 megawatts. The agreement with the Rwandan government stipulates that the power will be sold at about 15 cents per kilowatt hour, or less than half the cost of power generated by imported fossil fuels. (By comparison, U.S. consumers pay about seven cents.)

If everything goes as planned, Rwanda, with its current capacity of just 156 megawatts, could be transformed. Today, only about 20 percent of the country's 12 million citizens are connected to the power grid. In the Democratic Republic of Congo, only about half of its 2,400-megawatt capacity -- which comes mainly from hydropower -- is routinely available to its 77 million citizens.

Could an abundance of electricity and the economic improvements it brings serve as a peacemaker, especially in the eastern DRC, which borders the lake? That's a prevailing theory, but it will require international cooperation and good stewardship of the lake to make it all work politically, economically, and environmentally.

You can learn much more about Lake Kivu, its potential, and its risks from journalist Jonathan W. Rosen, whose fascinating in-depth tour of Lake Kivu for the MIT Technology Review includes an informative video.