“The only thing we need is more company. We don’t need your sympathy, we need your company," Tar Sands Action leader Bill McKibben said from jail, according to Jamie Henn of 350.org.

An estimated 45 additional arrests were made on Sunday as thousands of protestors continued their efforts to fight the Keystone XL pipeline. Over the course of two weeks, people for Tar Sands Action plan to continue a sit-in at the White House as an act of civil disobedience to urge President Obama to reject the requested Keystone XL pipeline permit.

According to Henn, up to 100 people were expected to attend a training on Sunday night to prepare for Monday's sit-ins, including a group of Nebraska farmers and a ranchers. Jane Kleeb, Director of Bold Nebraska, said:

Back home we are fighting to protect our land and water. We decided to bring that fight to the President’s doorstep because our families’ legacies, those that homesteaded the very land now threatened by a foreign oil company, are too important for us sit on the sidelines. We are acting on our values and expect our President to act as well.

The Canadian Press reports that by the end of the year, Obama will decide whether or not to permit the pipeline to be built. Despite much opposition, advocates argue that the pipeline would create many jobs and decrease U.S. reliance on foreign oil.

A CBS/AP report suggests that President Obama's decision could influence environmentalists who once voted for him:

Holding a sign that read "Obama, will you stand up to big oil?", protesters lingered outside the White House even after police announced they would be arrested if they did not move.

One by one, police called protesters out of the crowd, placed them under arrest and led them into a police vehicle.

All photos and captions courtesy of Tar Sands Action. 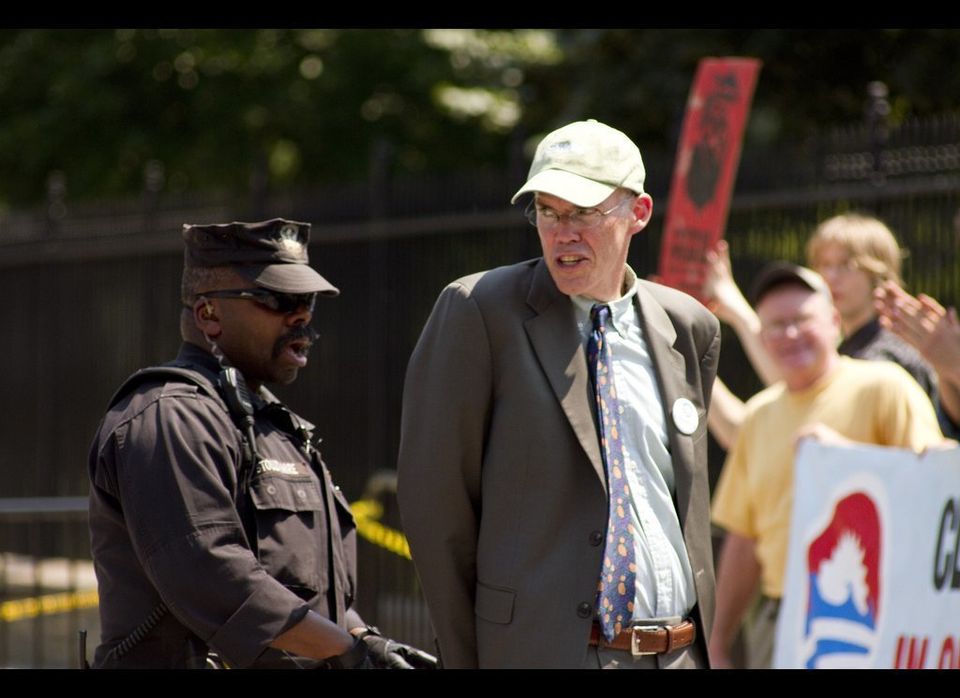 1 / 19
Bill Mckibben Arrested in Front of the White House
WASHINGTON, DC-- Bill Mckibben, Author and Co-Founder of 350.org, participated in Civil Disobedience on August 20th, 2011. He was arrested along with 64 other participants in the action who are all being held overnight.
Shadia Fayne Wood