While record numbers of protesters were chaining themselves to construction equipment earlier this week along the Oklahoma segment of the Keystone XL pipeline, the proposed plan to ferry Canadian tar sands to refineries on the U.S. Gulf Coast, another group of activists camped out at 8,000 feet on an Eastern Utah plateau. Their target: a lesser-known tar sands project here at home.

A Canadian company named U.S Oil Sands is poised to launch the nation's first tar sands mining operation at PR Springs, not far from Arches and Canyonlands National Parks. Tapping the energy resource, supporters say, will be a boon for Utah's local economy and the country's energy security, while posing few negative consequences, given the remoteness of the operation. Opponents, however, fear real impacts on local wildlife and tourism, as well as downstream effects on already polluted air and the continually dwindling supplies of clean water upon which millions of people in the West rely.

"We don't need to do this," said Celeste Bradford, 10, standing at the U.S. Oil Sands site with other kids, a few picking at rocks coated in tar. She suggested that if people raised solar panels instead, "we wouldn't have to be polluted anymore."

U.S. Oil Sands has all the permits to begin the nation’s first tar sands mining operation in Utah. (Emerson Urry)

"It's amazing how smart children are and what they do realize," said Raphael Cordray, who brought two nieces and a nephew on the trip to PR Springs, an area already dotted with oil and gas wells and nearby experiments in another unconventional fossil fuel, oil shale.

Cordray had known about Keystone XL. But when she realized that the tar sands issue was also, as she said, "something personal to Utah," she took action. She now leads an activist group, Utah Tar Sands Resistance, from Salt Lake City.

The Wasatch Front, the metropolitan corridor in which Salt Lake City and other populous Utah towns are located, already has some of the worst air in the country during the winter, due in part to oil refineries and the pollution-trapping topography of the mountain valley. Adding tar sands development, with its attendant diesel trucks and local refining, will exacerbate the problem, opponents argue.

"This stuff is the bottom of the barrel," said Cordray, noting the heavy oil requires more refining in a process that releases more pollutants into the air than that for conventional oil. "We could catch up with China. That's not even a joke."

While standing on an aspen-filled ridge near the mining site, she described to The Huffington Post the wild scene around her: roaming deer and wild turkeys, grazing cows and birds flying through blue skies.

"But just over the hill, you can see it," she said, referring to the U.S. Oil Sands' land. "They've done a lot of clearing, and are widening the road down here."

The mining operation has yet to begin, although the local government appears to be literally paving the way. U.S. Oil Sands has approximately 32,000 acres under lease, with initial permits to mine 213 of those acres, and the county is spending public money to widen and pave a road needed to access the company's site.

"Now is the time to get everyone to look at Canada," added Cordray. She said she hopes that awareness of the reported damage associated with tar sands mining in Alberta will incite further resistance in Utah, and ultimately stop U.S. Oil Sands before it gets started.

"There's no question that this is bad for air, for water, for animals," she said.

Less than a mile away from the U.S. Oil Sands' test pits -- one previously used as a trial mine, others dug to harvest donations of gravel for the county road -- lies an abandoned tar sands experiment from the 1980s, according to Emerson Urry, editor-in-chief of EnviroNews USA. He filmed at the site as his reporter tried in vain to rescue a chipmunk stuck in tar sands. 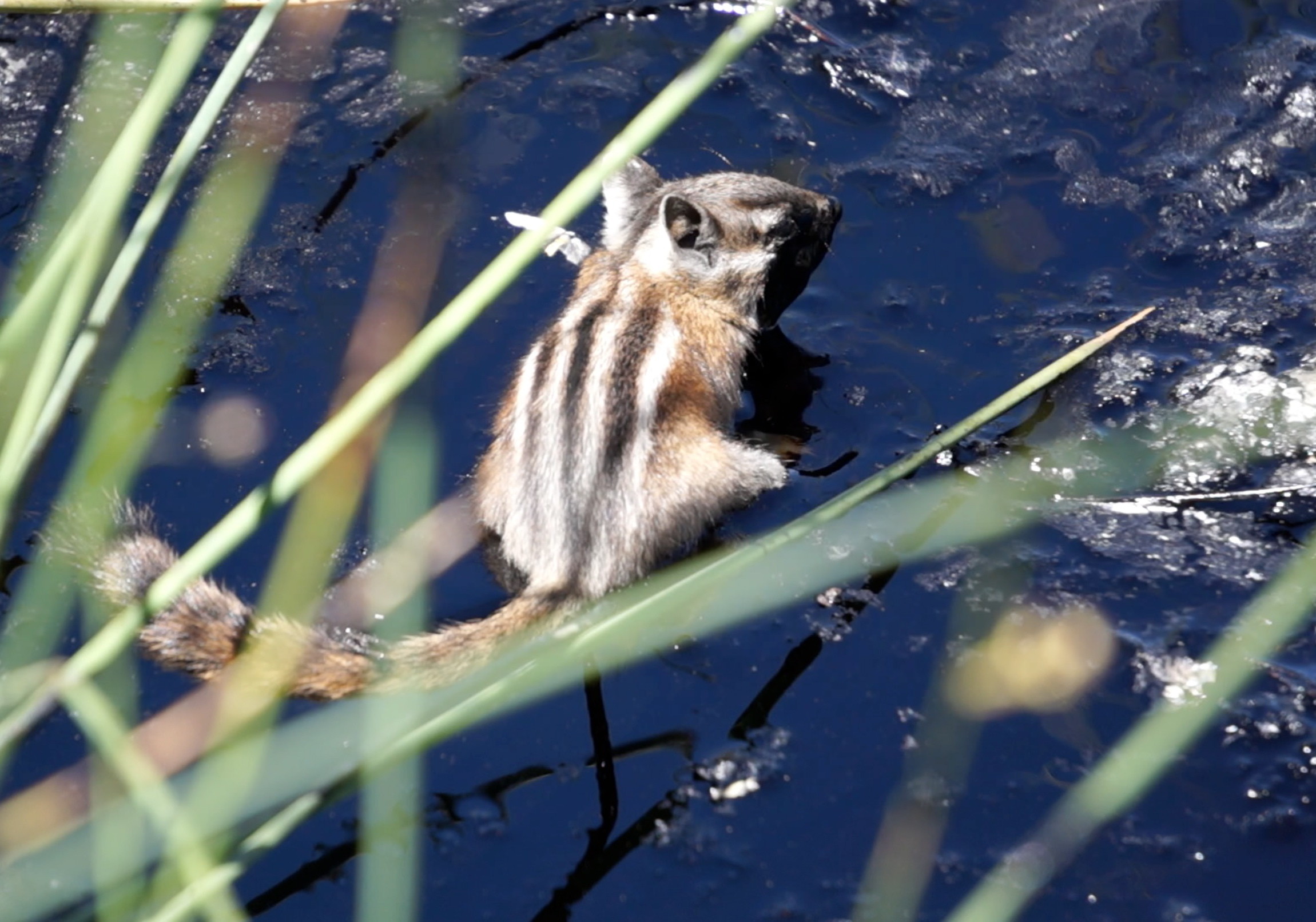 A chipmunk is stuck in tar at an abandoned mining operation near the U.S. Oil Sands site at PR Springs. (Emerson Urry)

The molasses-like substance, also known as oil sands, is a mix of bitumen oil, sand, clay and water. The film crew documented numerous animals that succumbed to the gooey sludge leftover from the failed mine.

"We're at the infancy stage of what the potential is in the state," said Tim Wagner, a Utah organizer with the Sierra Club. "If they get a hold there and get investors and make this process economically viable, it's Katy, bar the door."

Todd also emphasized the benefits for the state, including revenue for public education and nearly 100 jobs during construction and roughly the same number on a permanent basis for the first mine.

"There will probably be expansions," he said. "The current expectation is that we will be there for a long time."

Much of the opposition to the project stems from the fact that the West already faces critical environmental challenges that are worsening with climate change. Of particular concern is the parched Colorado River and its tributaries, which supply irrigation and drinking water to nearly 40 million Americans.

"The Colorado doesn't have anything to give. The reservoirs are half full. If it drops another 24 percent, hydroelectricity will no longer be available," said Weisheit, noting that tar sands mining is extremely water-intensive. "I can't believe this is happening. It is ludicrous."

Weisheit suggested that the operation poses both water quantity and quality issues.

Todd disagreed. He noted that U.S. Oil Sands would draw water from 2,000 or more feet below the surface. "It's so deep that it doesn't conflict with any other uses in the region," he said. "And it's well below recharge levels for the water table and rivers."

That argument would be in line with U.S. clean water policy, which assumes that water deep underground will never be used and can therefore be intentionally polluted. Yet, as ProPublica reported in January, there's precedent for that to change: Mexico City now has plans to draw drinking water from a mile deep to deal with its own water woes.

Tests conducted at the PR Springs site suggest there is no shallower groundwater to contaminate, according to Todd. "Even if there were groundwater, the process is benign and wouldn't have any negative impact," he said. "The only chemical involved is biodegradable and nontoxic: a solvent from citrus."

Utah state regulators awarded the permit based in part on that assertion. But William Johnson, a professor of geology and geophysics at The University of Utah, said he remains "skeptical" on multiple counts.

"Fact is, the groundwater system isn't well studied. There are springs in the area -- some are intermittent, some are perennial," he said. U.S. Geological Survey researchers confirmed that knowledge of the hydrology around PR Springs simply doesn't yet exist.

And while a citrus-based solvent may be generally innocuous on its own, Johnson explained how it could unleash compounds naturally trapped in the tar sands and make the end product toxic should it contact water.

"I'm not inherently against development of the tar sands," added Johnson. "But some basic tests weren't done."

Also, little understood is the extent of uranium contamination in the area. In the 1940s, USGS identified deposits of the radioactive heavy metal at PR Springs.

"I'm concerned with extreme fossil fuel extraction everywhere. But in our backyard, I'm particularly concerned," he said. "There are multiple layers of health impacts, especially for children."

Kids were the focus of the camp-out at PR Springs. They learned about the region's ecology, collected water samples and even held protest signs while chanting "Stop tar sands!" in front of a trailer occupied by a U.S. Oil Sands worker.

Back at a company test pit, Celeste Bradford watched as another kid bent down to pick up a tar-covered rock.

"Don't touch it!" she cautioned. "It's gonna be really hard to get off."