She is (what we call) a non-technical founder, rather than a whiz at writing code. In fact, she does not write code at all--does not even know how.

Yet she managed to build the top art-collecting app in the US, and to launch and scale it into a cash-flowing business--that is not only winning thousands of new customers a year, but also dozens of startup funding competitions, for investment, grants, etc.

What she has done would have been impressive for anyone.

The reason she was asked to give a Ted Talk about building apps without code (see her Ted Talk here) has nothing to do with misplaced pattern-matching. If you listen to her recount her story (video interview below), you will notice that her secret ingredient seems to simply have been willpower. She believed that it could be done, and once she drank that Kool-Aid, there was no convincing her to stop.

That is how anything incredible happens, and it is also how this happened.

Why I decided to interview Tara about building apps without code?

It seems like Tara was one of the very first people to ever to really do this robustly...

I originally wrote about that interview in this blog post, but I am including it for you below to inspire you like I was.

The Story Begins With An Accident

As Tara tells it, "I got into tech on accident." While still in college, she applied for an internship at Google that, honestly, she never expected to get. But she got it--even before she got her college degree. That was her first taste of tech. 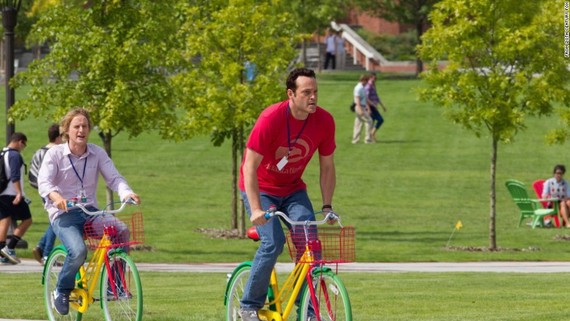 Think of this as Tara's real-life Vince Vaughn story.

After Google, Tara went to work for Foursquare in New York, and that was the first time she really got to work with the "full stack" of a startup. Whereas at Google--a massive enterprise company--her small team was rather isolated from other teams at the huge company, at Foursquare, she was able to work fairly intimately with most of the vital parts of the company: developers, marketers, etc.

Yet she was struck at how segregated even (relatively) smaller tech companies like Foursquare were based on the particular function a person was serving. "Marketers sat over here; engineers sat over there; and maybe...maybe they would talk to each other." The other thing that struck her was that engineers seemed to drive almost all decisions--even marketing decisions.

The Primary Concern Was Not Customer

Reflecting on her two tech jobs until that point, Tara observed that the primary concern seemed not to be the customer, but rather, the product--which, in the context of looking back at how Tara got started building apps without code, might be have been one of her more formative observations. I know this based on side conversations I have had before with Tara (and actually, this will be the subject of next week's video interview, "mistakes we have made while building apps without code").

Nowadays Tara is a vocal proponent of not delegating ownership of the product too soon. But in her view, this is precisely because the product is how you serve the customer that is (or should be) your primary focus. The founder should maintain intimate control of the entire product until the entire startup knows exactly what it is doing and has proven its ability to repeat this in rhythm. As she will discuss next week, delegating away too soon this product ownership is one of the more common mistakes she has seen founders make, and it is one she admits she made herself.

Kollecto Began While Tara Was Working At Microsoft

Tara left Foursquare to take a job in Seattle at Microsoft but soon started to get, what she describes as, an itch.

"I found that experience to be really unfulfilling because it was a super large team--I had been working on smaller teams previously--so I started to get this itch to be able to have autonomy over building my own thing again, or at least be able to roll up my sleeves and dig really deep into a problem."

One day, Tara looked around her apartment at the bare walls and decided she needed some art. That was her first thought, but I think her second thought evidences what kind of mind Tara had despite not being able to write code. Her second thought was about the rapid growth of recommendations for just about everything--music, movies, fashion, food--which resulted in her light bulb moment. If she wanted art, she still had to physically go into these "old-school, brick-and-mortar galleries to find art that was cool for my home."

"Wouldn't it be cool," Tara thought, "if I built something that matches people with art work, based on their tastes?"

"I Never Intended To Build An App"

Tara originally imagined Kollecto as a service to connect art advisors with young professionals looking for guidance on buying art commensurate with their particular tastes. But as we now know, Tara ended up building one of the most successful "without code" apps ever. And in this interview, Tara recounts how exactly that happened.