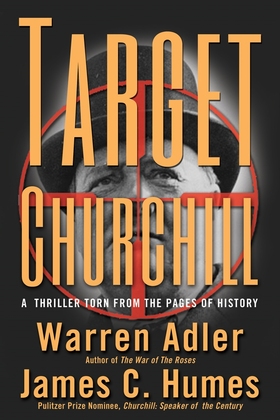 I am a member of the Lotos Club in Manhattan, a literary club celebrated for having Mark Twain as its most famous member. Apparently he had spent many happy hours with fellow members there in his declining years. A few years ago at a Lotos event, we were regaled by James Humes, a distinguished professor, historian, Pulitzer Prize nominated author, and a Winston Churchill specialist. With a startling physical resemblance to Winston Churchill, Humes has traveled the world impersonating the great British wartime leader.

Humes knew that I was a novelist, and he was seated next to me at the event. After his performance, he informed me that he had written a novel. Although Humes had previously published numerous non-fiction books, he asked if I would collaborate with him on a novel, as he had never attempted a work of fiction before. I politely declined. I do not collaborate on my novels. I do my own research, and every novel for me is a solo performance. It has been my way of life for more than half a century. The process has sustained me through over forty novels, short stories, plays, and essays.

I am truly a fan of Winston Churchill. I have indelible memories of his speeches, particularly the "Blood, Toil, Sweat and Tears" speech that I heard sitting in my grandparents' back porch in 1940 after the British retreat on the mainland of Europe. I also remember listening to the Iron Curtain Speech he made in Missouri in 1946. These speeches were an inspiration and moved me immensely. I will never forget them. Winston Churchill is a hero of mine. And just like Churchill, Humes too never surrendered. He sent me his manuscript and called me relentlessly.

After putting his manuscript aside for months, I finally decided to be fair to his noble efforts and read it. It was what I had expected, a non-fiction writer's honest and most excellent effort written without the skill of a fiction writer. The story was a fictional account of an imagined assassination attempt on Churchill's life as he made his 1946 Iron Curtain speech in Westminster College in Fulton Missouri.

I became hooked by Humes' idea and felt the stirrings of inspiration, which could fashion an exciting thriller. His research was impeccable, and I saw it as the foundation of a terrific story. After all, it was about an era that I had lived through and about a man who I revere. Humes' manuscript blasted open the door of my imagination, and I looked forward to fleshing out the story with various plot points.

I agreed to redo the novel based on Humes' brilliant core idea. My only proviso, as I insist for all of my novels, was that my work was to not be edited and accepted as is. We would share all publishing proceeds and the author byline. Thankfully he agreed. Indeed, I have enormous respect for James Humes' insight and judgment. These qualities have been carefully preserved in our collaboration.

I spent months reading memoirs, accounts of the events leading up to the Iron Curtain speech; composing his speech in the British embassy in Washington; facts about Soviet spies who had penetrated the embassy during the war; the relationship between Churchill and Walter H. Thompson, and his lone bodyguard; details of the Soviet advance into Berlin; events surrounding Truman's invitation to Churchill to speak at Westminster College in Missouri; the marvelous, true events about the famous poker game on the Presidential train en route to Missouri; and the Churchill family history at the time. It was all grist for the novelist's mill. My research led to new characters and sub-plots. It was all so rich and intriguing that I could have spent a lifetime on the topic.

As a pioneer in digital publishing, I released Target Churchill through my own publishing company, Stonehouse Productions, which has so far published thirteen of my novels and more to come. Target Churchill hit the Kindle bestseller list for Historical Fiction upon its release and this espionage thriller is now one of a slate of my novels in development as movies with Grey Eagle Films and The Solution Entertainment Group. Both James C. Humes and I occasionally lecture on Target Churchill, on how the novel was conceived and the historical background that gave birth to the idea.

Every novelist is asked where they get their ideas. I have spent many years reflecting on that mystery with most of my work. Target Churchill is an exception. It came via a person, a persistent messenger who, like Winston Churchill, never surrendered.

In celebration of the novel's anniversary, We are offering a limited time promotion on Target Churchill, at $2.99 exclusively for Kindle readers.

This Article Was Originally Published on www.Warrenadler.com

Warren Adler is best known for The War of the Roses, his masterpiece fictionalization of a macabre divorce turned into the Golden Globe and BAFTA nominated dark comedy hit starring Michael Douglas, Kathleen Turner and Danny DeVito. Adler's international hit stage adaptation of the novel will premiere on Broadway in 2015-2016. Adler has also optioned and sold film rights for a number of his works including Random Hearts (starring Harrison Ford and Kristen Scott Thomas) and The Sunset Gang (produced by Linda Lavin for PBS' American Playhouse series starring Jerry Stiller, Uta Hagen, Harold Gould and Doris Roberts). In recent development are the Broadway Production of The War of the Roses, to be produced by Jay and Cindy Gutterman, The War of the Roses - The Children (Grey Eagle Films and Permut Presentations), a feature film adaptation of the sequel to Adler's iconic divorce story, Target Churchill (Grey Eagle Films and Solution Entertainment),Mourning Glory, to be adapted by Karen Leigh Hopkins, and Capitol Crimes (Grey Eagle Films and Sennet Entertainment), a television series based on his Fiona Fitzgerald mystery series. Warren Adler's newest thriller, Treadmill, is officially available.