Target uses theoretical scenarios to teach its supervisors how to deal with, for example, workers who are scared of Muslims, or Latino employees who blame supervisor criticism on racism, and many other situations related to diversity and discrimination that may come up in the workplace, The Huffington Post has learned.

A 49-page internal document obtained by HuffPost entitled “Diversity Scripts for Stores” sheds light on how the company is supposed to deal with potentially inflammatory workplace issues as it faces a discrimination lawsuit filed by three former employees earlier this month.

The scripts present a long list of possible scenarios in which managers and employees discuss race, gender, sexual orientation, religion, age, disabilities and other topics. “The Diversity Scripts empower leaders to address difficult and real-life diversity situations,” the document says. “Some scenarios are overt, others are subtle, but all provide a model of how to initiate coaching and follow-up conversations.”

Each script, with titles like "'Terrorized’ Team Member," "It's Just an Expression" and "No Hablo Español," is made up of three parts: a set-up, a conversation and a debrief. The scripts are not meant to be referenced “word-for-word,” but are offered as models for managers to talk to workers in these types of situations, the document says.

Molly Snyder, a spokeswoman for Target, said the company recognizes that these sorts of conversations can be “deeply personal.”

“Because of that, this resource was created to help ensure our team continues to handle diversity conversation in the most sensitive way possible,” she said. “This was one element of a larger program designed to foster open, honest, respectful conversations.”

Jim Beard, a human resources expert and a professor of management at the University of Arkansas-Fort Smith, said these sorts of training methods are often used by corporations to “cover their rear ends.”

Since each scenario laid out in the document is so specific, the scripts are probably based on real problems that Target has had to deal with in the past. Still, since many of the scripts traffic in certain clichés, the company may be “exacerbating some of these stereotypes rather than mitigating them,” Beard said.

“In real corporate life, you’re going to be surprised,” he said. “When these stereotypes don’t hold, that’s what will really throw managers a loop.”

Despite efforts to curb discriminatory behavior, another Target training document ran into just that problem.

The three former warehouse workers who are currently suing the retailer in California's Yolo County cited in their complaint a document distributed to warehouse managers that addressed Hispanic stereotypes. The document, called “Organization Effectiveness, Employee and Labor Relations Multi-Cultural Tips,” noted that not all Hispanics eat tacos and burritos, dance to salsa or wear sombreros.

According to their complaint, the workers took offense to the generalizations and claimed that their supervisors, who were nearly all Caucasian, frequently used racial slurs when talking to Hispanic employees.

Target acknowledged the existence of the document, and said it was only used at one warehouse without approval from the corporate office. The company apologized for its contents.

The "Diversity Scripts," on the other hand, are corporate-approved and are distributed to Target stores. Read some of them below.

In this scenario, one of the executive team leaders tells his workers that they're not allowed to speak Spanish, and a co-worker confronts him about it: 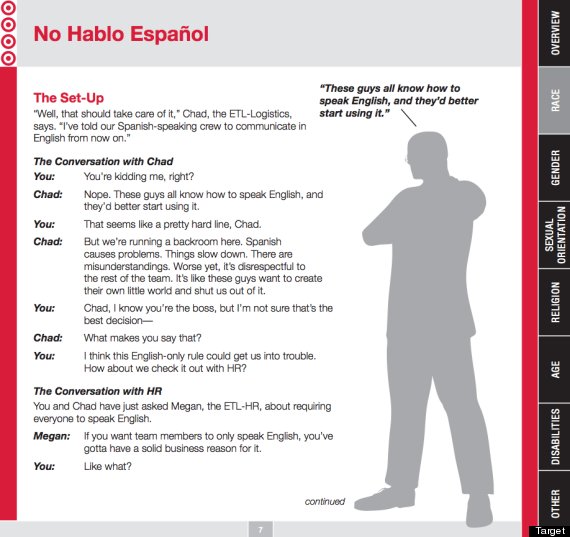 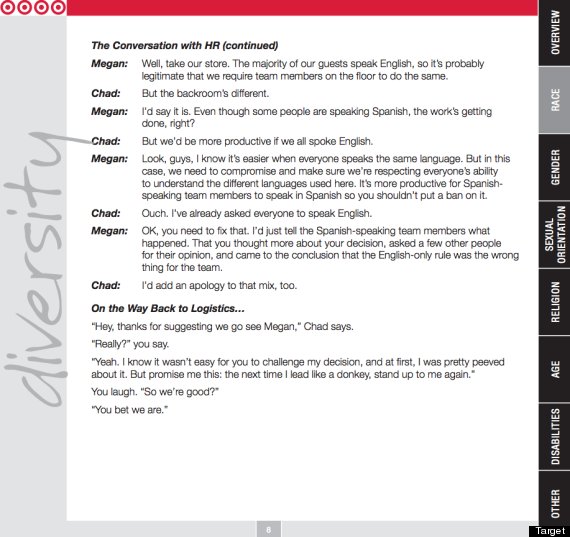 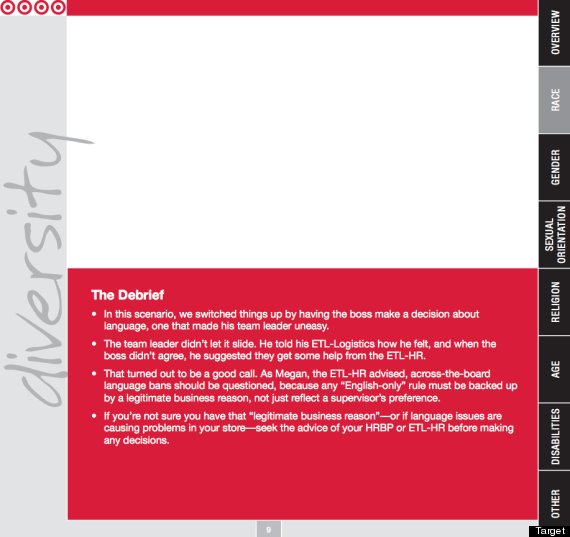 "Late Again" involves a Hispanic employee who's constantly late for work but blames his boss's criticisms on discrimination: 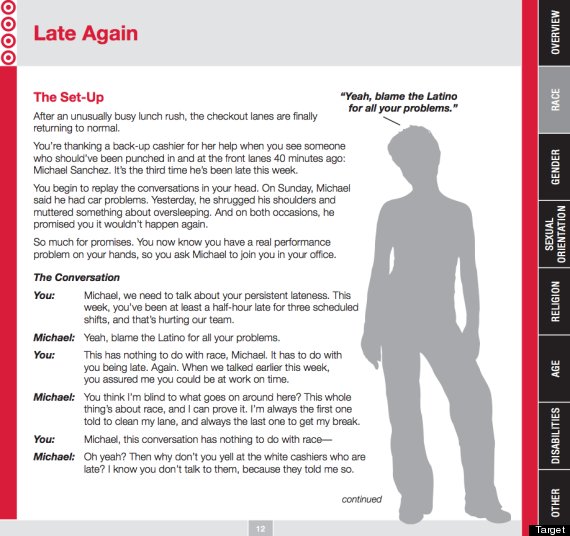 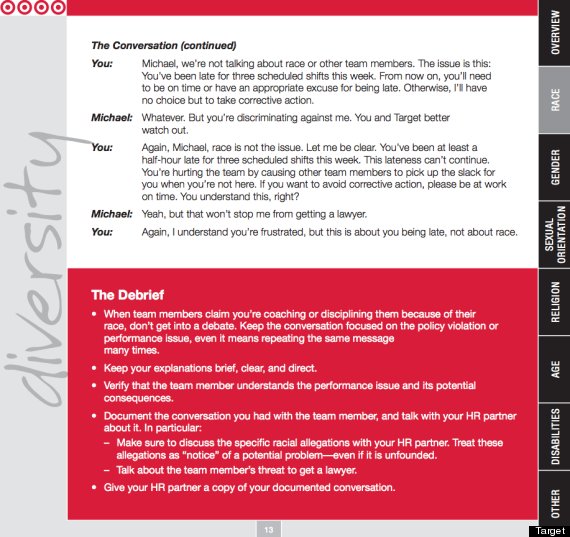 This scenario presents what to do with a "terrorized" worker who claims to be scared of Muslims: 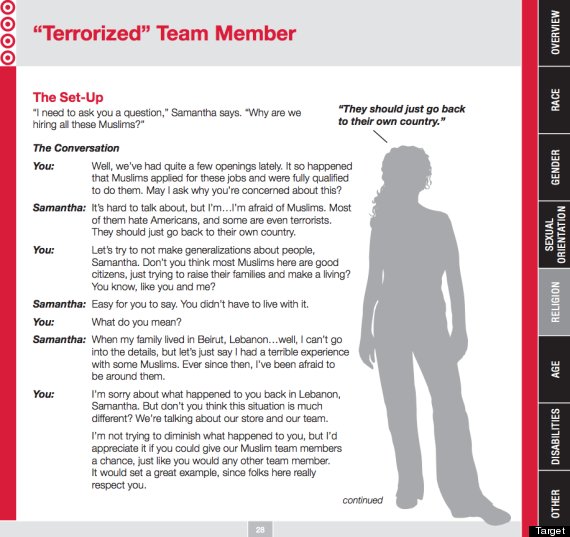 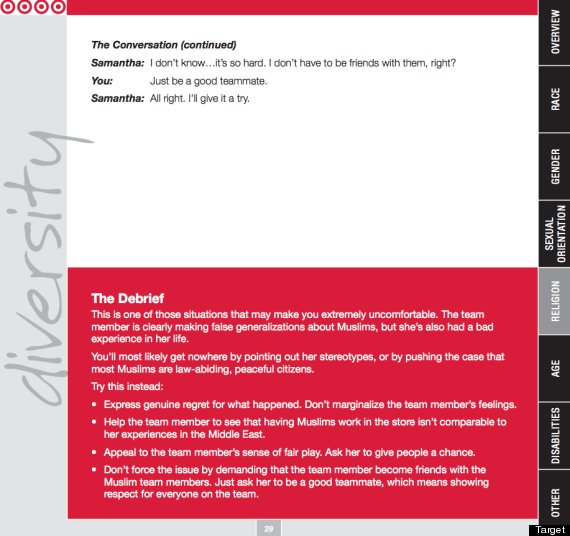 Under the disabilities section, Target addresses the usage of the word "retarded": 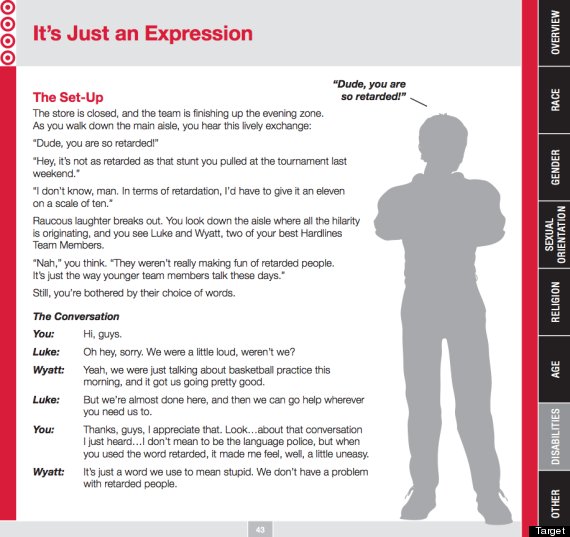 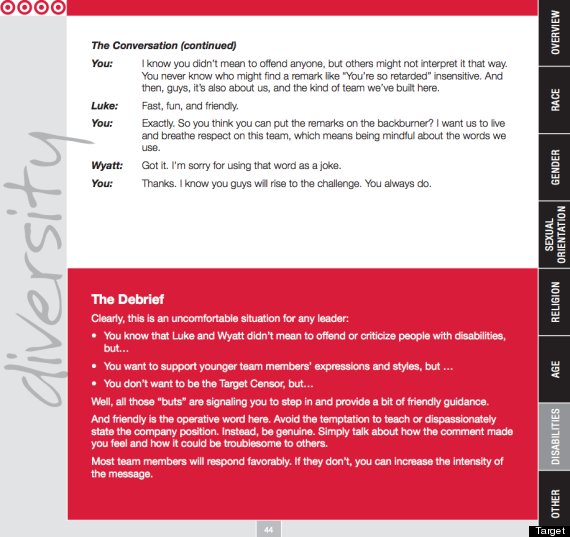 And in one of the longer sections, the manual presents a situation where a worker accuses African Americans of laziness: 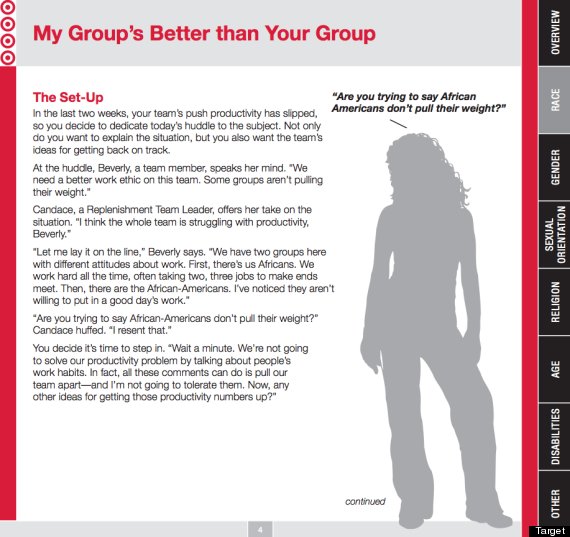 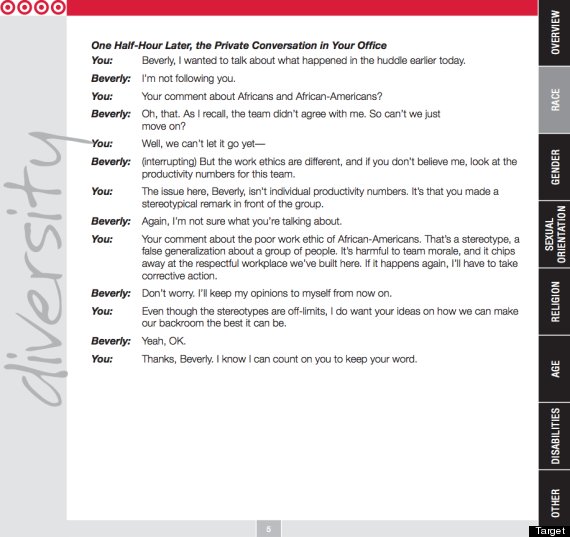 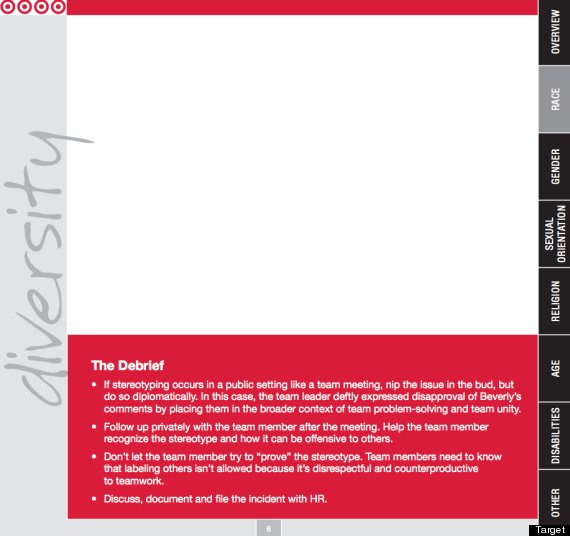