The great mystery of why Target is refrigerating bags of Doritos has been solved.

Over the last two weeks, shoppers have posted images on Twitter and Instagram of bags of Doritos stored in Target refrigerator units alongside sour cream, cheese and raw ground meat. The store confirmed to The Huffington Post Tuesday that it's promoting a recipe called the “walking taco," which calls for a diner to crush up the nachos, add taco toppings and eat the mixture out of the bag with a spoon.

Doritos are sold cold at Target in Waukesha County. I knew there was a reason the people out here vote differently. pic.twitter.com/GoxWRgBWU8

Target spokeswoman Jessica Stevens wrote in an email to HuffPost that the placement was for the "walking taco."

“Target will often display products together to give our guests ideas on how to use the items and create a more convenient shopping experience,” Stevens said in a statement. 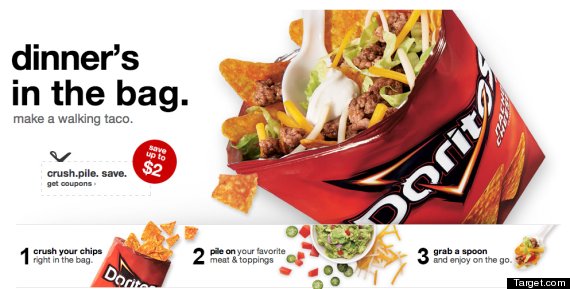 But while this mystery has been solved, the reason behind why some Target stores have been spotted storing the chips and Cheetos in locked video game cases remains unclear. The Consumerist published a photo on Tuesday showing Target showcasing its cheesy, $4 snacks in the same locked cases it keeps $60 copies of “Call of Duty.” Can't be too careful! 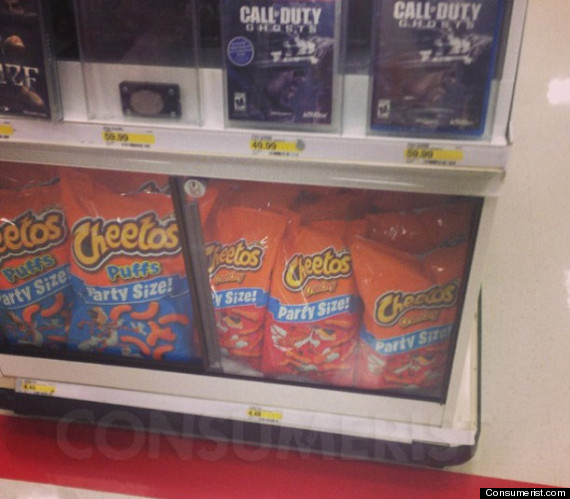 And as far back as November 2012, customers posted photos on Twitter and Instagram of Doritos stored the same way.

Microsoft has made Doritos so in-demand at my Target that they are actually BEHIND GLASS in the electronics section http://t.co/kT1SbQEcyt

Gotta keep the Doritos secure. I see you target. pic.twitter.com/Tm3qdeO0qY

Target, which is dealing with the fallout of its chief executive resigning on Monday over a massive data breach last year, did not immediately respond to urgent questions from HuffPost asking why the snacks were locked in cases.