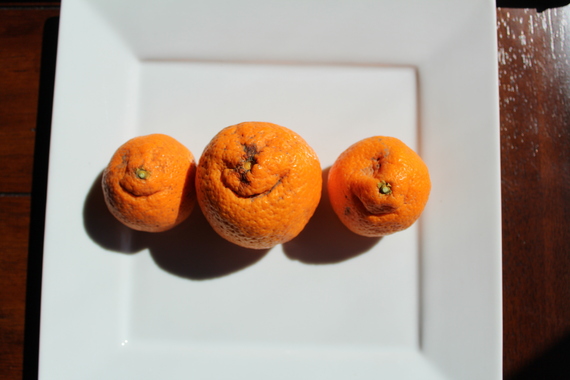 The power of our collective action has convinced Whole Foods Market and Walmart to start selling ugly produce. #UglyReallyIsBeautiful is now more than a mo-ment, it is officially a move-ment to get all grocers in the U.S. selling (not rejecting) ugly produce. Let's keep it going and work together to now encourage Target to combat food waste and increase fresh produce access by sourcing, selling and marketing ugly produce! You can do that right now at www.Change.org/TargetGetUgly.

In March, Culinary Nutritionist Stefanie Sacks and I were successful in petitioning Whole Foods Market to sell ugly produce. And in July, the delivery of our Change.org#WhatTheFork Walmart petition, resulted in Walmart announcing two ugly produce efforts. As one of the largest retailers in the U.S. with about 1,800 stores, Target's slogan is "Expect More, Pay Less." And, the retailer says it listens to its customers. Let's now give Target a clear message that we want it to do something simple, effective and good for the retailers' and customers' bottom line.

Target has been working on ways to attract and retain more shoppers with less packaged and processed food and more produce. Target already offers lower prices on "regular" produce at its stores and we applaud its efforts on fruit and vegetable prescriptions (FVRx) in Los Angeles and beyond. However, Target has had its struggles in the grocery sector and now it's time to get ugly (produce).

In the U.S. studies show that almost 90% of people are not eating enough fresh fruits and vegetables, the recommended five servings a day. Many American families simply can't afford enough fresh produce. Yet, we throw away about 25% of all produce before it even reaches the grocery store due mostly to cosmetic standards from large grocers.

If produce fails to make the grade for size, shape, or color, retailers deem it "ugly" and refuse to sell it in their stores. Billions of pounds of good, healthy produce is wasted because it's not pretty! The U.S.-based ReFED report shows that 20 billion pounds of produce, consisting mostly of perfectly nutritious and delicious fruits and vegetables that look less than "perfect," is wasted, before stores in the U.S., every 12 months!

But this food is perfectly edible. Studies confirm that the "uglies" are equally as nutritious as any produce you get in the store, and, in fact, ugly and smaller produce can actually have more taste and nutrition! And ugly produce programs are starting to take off in the U.S. after seeing success in Europe.

Some may say there is a lack of ugly produce supply. Don't believe them. I have connected with hundreds of farmers over the last year and you know what they say? They say "thank you for doing what you do, I hate wasting good food. But because of these cosmetic restrictions, I have to waste a lot of produce." Farmers would love to harvest and donate everything that isn't purchased; but most already do all they can (without going broke) and there is just too much that gets rejected by large grocers. In reality, the supply of "ugly" produce is there, buyers (grocers) just have to work for it and help farmers out.

Work for it as the recently expanded programs with Hungry Harvest, Imperfect Produce, Giant Eagle, and Whole Foods Market have and will continue to do. Even further, we now have the citizen demand for ugly produce programs everywhere in the U.S. to back it up. People will buy ugly produce, with a little education and a discount. The almost 300,000 signatures on three petitions that myself and Stefanie Sacks have started, to Walmart, Whole Foods and now Target shows that loud and clear.

Target has shown interest in innovating to prevent food waste with its "aging" produce markdown pilot. However, that is for "less than fresh" produce and "ugly" produce is of much higher quality and freshness, representing an even bigger bargain for its current customers and potential new customers.

We recently contacted Target to see if "ugly" produce is something they're working on, or at least looking into, and unfortunately they are not. So join the #UglyReallyIsBeautiful movement as we raise awareness and ask Target to be part of the solution, not the problem. Tell them to add an ugly produce program to their store aisles so you can save money, fight produce deficiency and help the planet all in one.