As you may have heard, mega-retailer Target has come under fire recently for contributing to a political action committee called MN Forward, which supports the gubernatorial ambitions of Tom Emmer, a candidate whose hostility toward the LGBT community begins with opposition to same-sex marriage and runs through to wholesale denial of equal rights and alliances with organizations whose takes on the gay community neatly align with those Ugandan madmen.

It took a long while for the Human Rights Campaign -- which had previously bequeathed to Target a pristine 100-percent rating on its Corporate Equality Index -- to get off the mat and take up this matter with the retailer. They've since applied pressure to both Target and Best Buy. For their trouble, they've earned an apology from Target CEO Greg Steinhafel, along with a nebulous promise that Target will institute a "review process for future political donations."

Abe Sauer, who has put a bullseye of his own on this story, returns to The Awl today with as rich an exploration of both new and old angles to this story as you're likely to find anywhere. From Sauer's report, it seems like any "review process" Target institutes for the benefit of maintaining a good relationship with the LGBT community has got a long period of reflecting on past actions to look forward to:

The truth is not that Target and its leadership have suddenly turned on their commitment to gay rights. It's more that it never really existed to begin with. Further research shows that Target has funneled significant funding to the most socially conservative of Republicans and that it boasts a frightening culture of anti-gay candidate support from Target's own stable of top executives.

We have already noted that CEO Gregg Steinhafel and his wife both maxed out their personal contributions this year to Michele Bachmann and Tom Emmer. But Steinhafel is just the captain of the crew.

Target's current group of top corporate officers have supported a murderers row of anti-gay politicians. Even more confusing, some of those anti-gay candidates supported by Target's PAC and its executives don't even represent Minnesota.

That's just a taste, please make with the click to get the full story. Here's an addition worth noting, however:

How on earth did they maintain a perfect rating from the HRC?

UPDATE: While Target is reviewing their process for political donations, maybe they'd like to explain this? 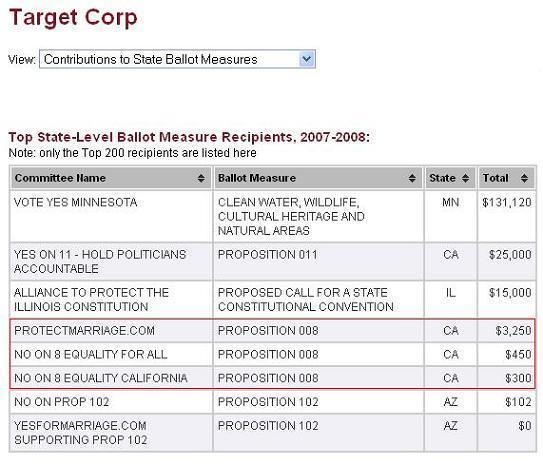 Looks like Target was playing both sides of the fence in California's Proposition 8 battle, except they favored the anti-marriage equality side by a wide margin.

And to dovetail back to the HRC Corporate Equality Index, here's what HRC spokesman Michael Cole told Abe Sauer on July 29:

Cole told us, "It's important to understand that the CEI is a measure of the workplace practices of a company toward its own LGBT employees. We don't believe that rating companies based upon their political contributions is an accurate reflection of their commitment to LGBT equality in the workplace." Further, Cole says, "Unless the contribution is to a ballot initiative that is anti-LGBT (such as California's Prop. 8 in 2008), political contributions are not factored into a company's score...."

So it looks like the HRC needs to embark on an internal review of their own, as well.

UPDATE: As has been pointed out to me, yes, the Open Secrets figures here do not necessarily mean anything other than deep-pocketed individual employees of Target are making personal contributions to these ballot initiatives.

So, to be clear, Target employees were playing both sides of the Prop 8 fence. My primary concern in this instance, is with the HRC's Corporate Equality Index, which measures "workplace practices" but eschews any rating based on political contributions save those made "to a ballot initiative that is anti-LGBT (such as California's Prop. 8 in 2008)." In this instance, it's just one more red flag that the HRC should have noted before awarding Target a perfect 100% rating.