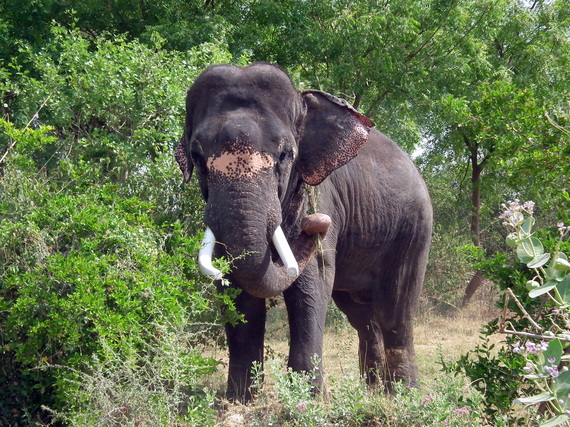 A handful of peppermints clasped in his palm, the keeper calmly issues a command to the massive tusker before him. The elephant, Rajesh, turns slowly and presses his ear against an opening in the green "wall" of pipes separating him from the keeper.

Approval received, Rajesh sneaks his powerful trunk through the piping of the "wall" and the keeper drops a peppermint or two to the eagerly waiting elephant.

Rajesh munches happily on his reward, satisfied, and oblivious to a second set of hands on his ear. With steady confidence, veterinarian, Dr. Vibha Raghuram identifies an artery on Rajesh's ear and carefully draws a sample of blood from the bull elephant.

Dr. Vibha's outward composure is deceptive, and the joy erupts out as soon as the procedure is complete. This is the first time she has drawn blood from Rajesh- and he is even in musth, and would typically be aggressive. In fact, this is the first time blood has been drawn from a bull elephant in India, with no violence, force or sedation!

The hours of conditioning and positive reinforcement have paid off. Unaware of the significance of what just happened, Rajesh is happy to stand still and enjoy his peppermints. 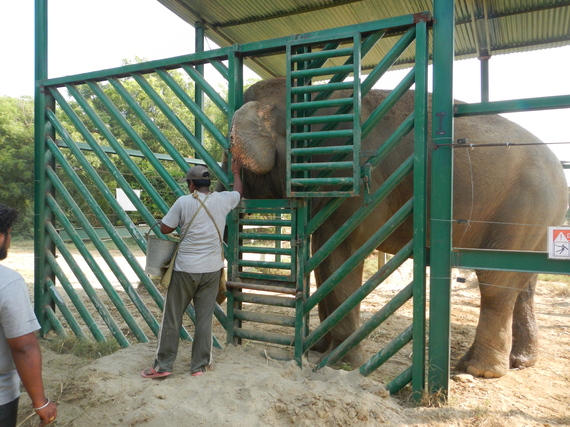 The "wall" that separates Rajesh from the keeper and vets is known as a Protected Contact wall. Its design allows the elephant and its handlers to see each other and to interact, without the risk of an elephant accidentally hurting the people caring for it. Specially designed openings or "ports" at different levels allow the veterinarian easy access to the ears, eyes, trunk and feet of the elephant. Of course, convincing an elephant to willingly offer a part of its body for treatment is much easier said than done, but Rajesh did it- how?

The secret is in the peppermints.

"Positive reinforcement' is a type of training using treats and affection to instill in the elephant a response to a particular verbal or non-verbal instruction from the keeper. When the elephant does what the keeper requires of it, it is rewarded with praise and a treat. If it doesn't comply with an instruction, it is denied the treat- but no force or negative reinforcement is used to punish or reprimand it. The teaching of the commands is done by a process known as target training, where the desired response from the elephant is referred to as the "target." The elephant voluntarily performs the behaviour and wants to please its mahout. 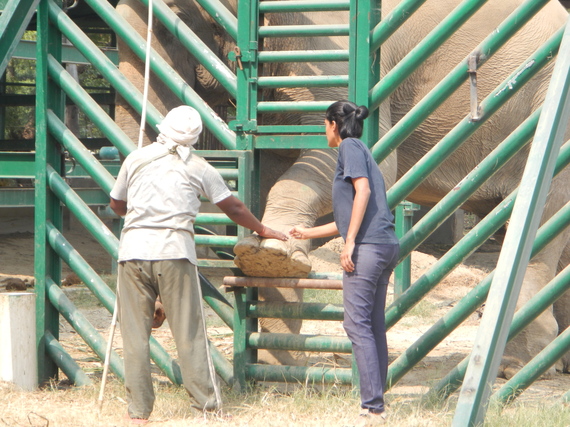 The Protected Contact wall and target training make treatment and care of an elephant less stressful for everyone involved, especially the elephant, and decrease the risk of an accident to the mahout. The daily process of veterinary care is now a bonding process between the keeper and his elephant instilling trust and companionship between them. Wildlife SOS' Baiju Raj elaborates, "India has a long history of captive elephant management based on negative reinforcement and cruelty. We aim to build bridges between mahouts and elephants by introducing positive reinforcement and combining it with both protected contact as well as free contact, which our elephants enjoy during regular activities, like walks and bathing. The mahouts, who have long relied on negative reinforcement, confess that the elephants are now calmer and more obedient, and this makes them feel safer as well."

The benefits attain greater significance in the case of Wildlife SOS' work with elephants because of the conditions we rescue them from. With their history of trauma and beatings in mind, Wildlife SOS installed the first ever Protected Contact wall in India at its elephant sanctuary- the Elephant Conservation and Care Centre, Mathura- in the year 2012 to train its elephants with this positive method. Take the example of the magnificent tusker, Rajesh. After nearly 30 years as a performing elephant in a circus, Rajesh associated humans with sharp jabs from an ankush or bullhook, forcing him to perform painful, unnatural acts for the amusement of an ignorant audience. To him, human beings were a threat- they would beat or starve him if he didn't obey, and Rajesh himself was considered a problem elephant with a tendency to hurt his handlers.

"It took months of conditioning, and consistent practice by the entire team. Rajesh is in musth currently, but he was so gentle and cooperative through the entire procedure- it's like he's developed a whole new level of trust in all of us," Dr. Yaduraj states. He continues, "Positive conditioning takes a long time to implement, however, and can be a process requiring patience. But Rajesh's successful blood draw proves that it's all worth it."

In addition, years of abuse and neglect necessitate ongoing medical care for our rescued elephants. Frequent sedation for treatment is not a feasible option, but target training has made it possible for our vets to conduct regular treatment with ease and without fear of retaliation by a stressed elephant. Even elephants like Bhola, who was left completely blind following a horrific road accident in 2010, have benefited from the program. A special treatment pen for blind elephants has been built at the elephant center to make the treatment of the abscesses and wounds Bhola incurred as a result of his accident easier and less stressful for this tall bull.

Wildlife SOS is about rehabilitating elephants as well as their mahouts or keepers, and helping them to live together- peacefully and safely. Even if it means occasionally "building a wall" between them.