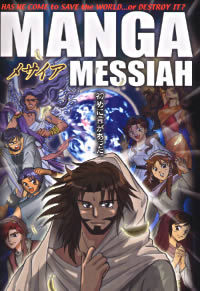 For several years now, I have been tracking and studying the covert aspects of Christian Zionism but today an anonymous source -- a devoted and concerned student of the spread of anti-Semitic ideas within American pop-culture and religious culture -- sent to me a product, currently sold at Barnes and Noble bookstores, that suggests the historically covert anti-Semitism within American Christian Zionist culture is mutating, changing and entering a new phase: the anti-Semitism is becoming overt. The Christian Zionism of Tim Lahaye and of Senator John McCain's recently renounced political endorser Pastor John Hagee, which has traditionally perpetrated coded attacks on Jews while also declaring them to be blessed by God, especially if they move to Israel, may be entering a new and very dark phase. 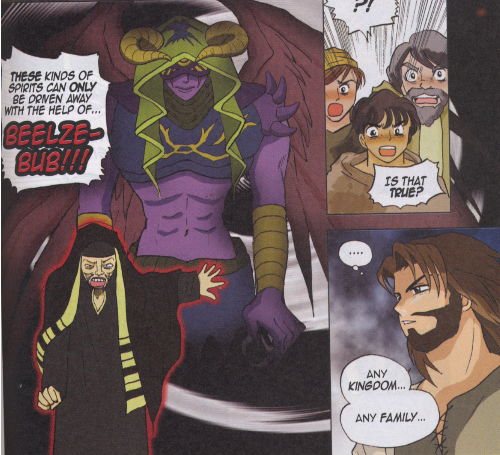 According to Chip Berlet, senior analyst at Political Research Associates, based near Boston, the portrayal of Jews found in a Manga comic now sold in Barnes and Noble depicts "A colorful comic training manual for motivating young leaders of the next pogrom against Jews. Not just offensive -- ghastly and horrific in content with a clear enemy scapegoat identified for venting apocalyptic religious bigotry."

Tyndale House, one of the largest Christian and Christian Zionist publishers in the United States, was built largely on the breakthrough publishing success of Tim LaHaye's and Jerry Jenkin's "Left Behind" books, movies and other paraphernalia attached to the now enormous "Left Behind" brand name and Tyndale publishes books by James Dobson, head of the enormous Colorado Springs Christian conservative nonprofit organization "Focus On The Family".

My source who originally discovered what Berlet identifies as a "comic training manual" for "the next pogrom against Jews" states that she:

bought this copy of Manga Messiah at a local Barnes and Nobles, day before yesterday. Tyndale, the Christian publishing house, was also the publisher of the wildly successful Left Behind series, which popularized dispensational Christian Zionism and provided sales of over 60 million books. The growing acceptability in our society of this stereotype of Jews is not happening in spite of the apocalyptic Christian Zionist movement. It is happening because of it! This movement has been the incubator of media objectifying Jews as non human as well as the source of media that is mainstreaming anti-Jewish conspiracy theory. It is dressed up as biblical interpretation or futuristic prophecy but the images are being projected to millions of people all over the world. Even worse, the images are being validated in the minds of these millions as an acceptable way to view Jews because of the visible participation of Jewish leaders with the movement." 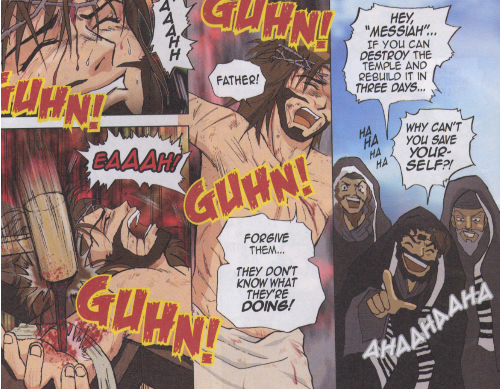 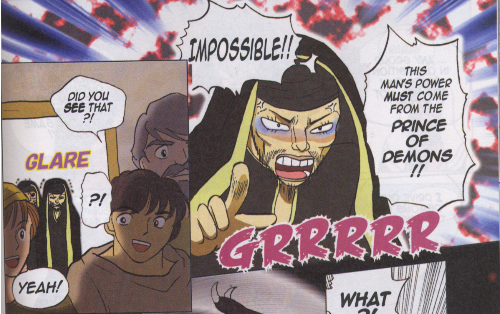 In the aftermath of the recent controversy over a video which I made and which subsequently was shown widely on national television, CNN's Wolf Blitzer credited the website I co-founded with journalist Frederick Clarkson with as having forced Arizona Senator John McCain to drop Texas megachurch Pastor John Hagee's February 28, 2008 endorsement of McCain's current presidential bid -- because my video showcased an audio excerpt from a sermon Hagee had given which, I believed at the time, had been given "in the late 1990s", in which Hagee stated that "God sent Hitler" and that Jews were not "spiritually alive".

Many news reports have minimize the audio excerpt, passing it off as a one-time event and as "historic". But, Pastor Hagee has not denied his remarks that God sent Hitler, and John Hagee Ministries up to the moment I am writing this, May 29, 2008, 3:49 PM EST, still sells the 3-sermon "Countdown To Crisis" DVD set from which I extracted the audio clip (the "Battle For Jerusalem" sermon). And, Pastor Hagee has over the years, in his sermons, books and films, promoted a wide range of anti-Jewish themes: most of the classic anti-Semitic tropes and slurs that have simmered in the background of Christianity and sometimes come to the foreground -- with tragic results.

But how can Pastor Hagee, who has raised substantial amounts of money to help Jews make Aliyah to Israel, who have publicly shed tears over the Holocaust, possibly be anti-Semitic ? The answer is complex and far beyond the scope of this short article, but one particular historical anecdote shines a telling light on the question.

As described in the book Henry Ford and The Jews, by Neil Baldwin, from the period of 1913 to 1920, Henry Ford made a regular, and generous, gift of new Ford automobiles to a one-time neighbor of Ford's: Rabbi Leo Franklin. By 1920, Franklin was on his 7th gifted Ford auto but in the years Franklin had enjoyed Ford's largesse, the Rabbi had risen in local Jewish leadership circles and by 1920 had come to a realization which led the Rabbi to return Ford's 7th gifted auto, a customized Model T; Rabbi Franklin had come to the moral realization he could no longer accept gifts from a man, Henry Ford, whose publication the Dearborn Independent was launching vicious anti-Jewish fusillades and which had begun to echo the evolving German Dolchstosslegende, the German "stab in the back" myth that formed a substantial part of the anti-Jewish animus growing in Germany in the early 1920s and which attributed the German loss in World War One to a Jewish plot.

As my anonymous source for the striking Manga comic book material featured in this post explains:

Henry Ford believed that his friend, Rabbi Franklin, should not be concerned about Ford's spread of the "Protocols of the Elders of Zion," because as his spokesperson explained, he was only targeting "a certain type of Jew to open up the way for those Jews' self-correction." There could not be a better description of the current dispensationalist activities. They happily embrace the "good Jews" who will play their role in bringing about the violent apocalyptic drama that will end the "Jewish Question" forever and bring Jews to correct belief. However, while wrapped in the protection of a big Israeli flag, they are free to brutally attack "a certain type of Jew" which is the source of the moral degeneration in America and the obstacle to the Christian millennial reign."

In the 1920s, automaker Henry Ford paid for a mass printing of his "The International Jew" pamphlet, a close derivation of the "Protocols", and through such nakedly anti-Semitic literature Ford helped shape the ideological climate in Germany that fed the rise of Third Reich and The Holocaust. But, Ford did not believe he hated Jews as a people: only the "wrong" Jews.

As conservative Baptist scholar David P.Gushee described, in an address given at the Andover-Newton Theological Seminary, in Andover Massachusetts, during the summer of 2006, there are many troubling similarities between the narrative of cultural despair and cultural complaint that prevailed in Germany of the 1930's and corresponding narratives of cultural despair and complaint that have been on the rise in America in recent decades:

It was this cultural despair--a toxic brew of reaction against secularism, anger related to the loss of World War I, distress over cultural disorientation and confusion, fears about the future of Germany, hatred of the victorious powers and of those who supposedly stabbed Germany in the back, and of course the search for scapegoats (mainly the Jews)--that motivated many Germans to adopt a reactionary, authoritarian, and nationalistic ethic that fueled their support for Hitler's rise to power. A broadly appealing narrative of national decline (or conspiratorial betrayal) was met by Hitler's narrative of national revenge leading to utopian unity in the Fuhrer-State.

Conservative American evangelicals in recent decades have been deeply attracted to a parallel narrative of cultural despair. Normally the story begins with the rise of secularism in the 1960s, the abandonment of prayer in schools, and the Roe decision, all leading to an apocalyptic decline of American culture that must be arrested soon, before it is too late and "God withdraws his blessing" from America. While very few conservative evangelicals come into the vicinity of Hitler in hatefulness, elements similar to that kind of conservative-reactionary-nationalist narrative can be found in some Christian right-rhetoric: anger at those who are causing American moral decline, fear about the future, hatred of the "secularists" now preeminent in American life, and the search for scapegoats. The solution on offer -- a return to a strong Christian America through determined political action -- also has its parallels with the era under consideration."

In Germany of the 1920s the key purported villains behind an alleged national, cultural and moral decline were the same as today in America of the early 3rd millennium: liberal Jews, socialists, liberals, gays, artists and those in society who follow non-conventional lifestyles and cleave to non-conventional, leftist politics. Germany in the 1920s was culturally one of the most liberal, permissive societies on Earth, but that changed radically -- and in a breathtakingly short period of time -- with the rise of Nazism.

Pastor John Hagee professes, with great apparent sincerity, even to tears, to love Jews. But Hagee also promotes, in his sermons and literature, conspiracy theories that trace back, in their lineage, to "The Protocols of The Elders of Zion" and Henry Ford's "The International Jew". How, then, can these clashing views of John Hagee be reconciled ? One answer comes, in the form of a question, from the account of Henry Ford and Rabbi Frankel -- what is the nature of friendship and what is the nature of love ? Another answer comes from the field of criminology, which recognizes: love, hate and murder are, all too often, tragically, not far apart.

Portrays a version of reading Biblical text about the crucifixion of Christ rejected by most Christians for decades--especially since the Nazi genocide of Jews.

Many readers of the Bible's New Testament will recognize the jibes from the jeering crowd as coming from Jewish chief priests, elders, scribes, and Pharisees. If readers don't know the references, the Bible verses cited below the images can be consulted to make clear the Jewish identity of the bloodthirsty crowd taunting Jesus.

These images of Jews as the Christ killers make Mel Gibson's "The Passion of the Christ" hideous snuff movie seem tame in comparison."